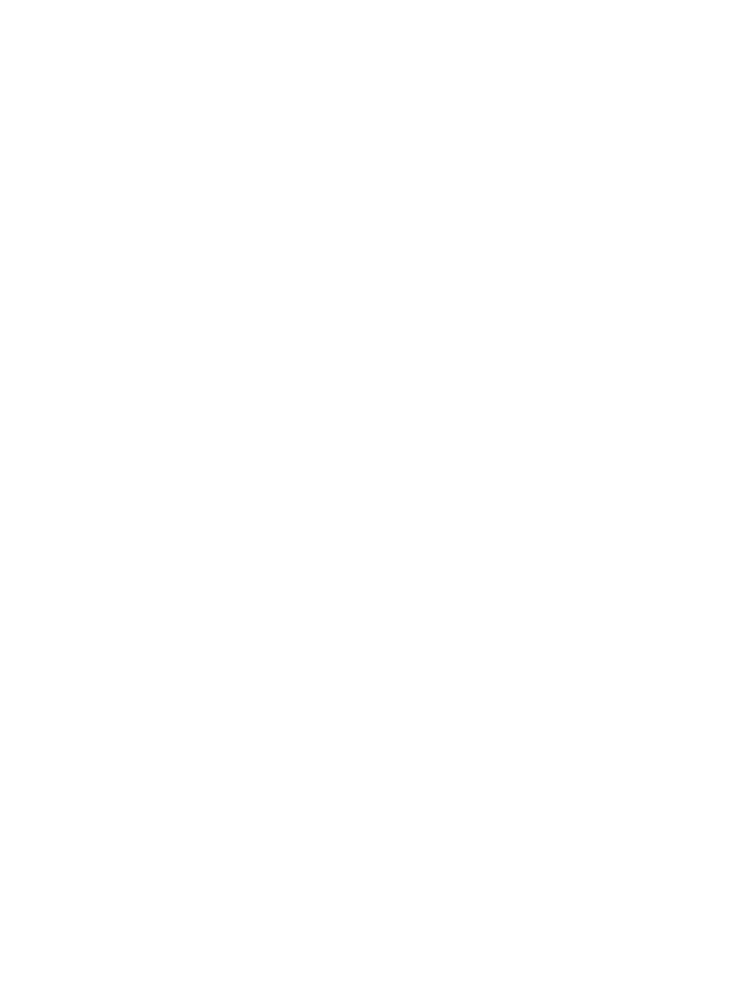 SoftBank Academia was established in 2010, headed by Masayoshi Son himself. The institution has approximately 300 students working and studying together in a variety of programs aimed at identifying and fostering both potential successors to lead the SoftBank Group and also people who will take up the challenge of our AI cluster strategy.

You will have the opportunity to study business administration and strategic planning, including the chance to learn directly from Masayoshi Son about such topics as the inside story on business strategy and the secrets of decision making.

You will be part of an exclusive community among fellow students overflowing with enthusiasm and possessing knowledge, experience, and talent from a wide range of fields. The resulting synergies will lead to numerous business connections.

Participation in the program will provide opportunities for you to contribute to business strategy formulation and involvement in the SoftBank Group.

Well-known leaders are invited to join in panel sessions, including presentations by Masayoshi Son himself on his own approach to management theory. Past such sessions for Academia students have included discussions between Son and such notable people as former US Secretary of State Colin Powell and Tadashi Yanai, Chairman, President, and CEO of Fast Retailing.

Students present their ideas on a topic set by Masayoshi Son that relates to business issues facing the SoftBank Group. Those who make it through a preliminary round get the opportunity to make their presentation in front of Son and other senior management of the SoftBank Group.

The Management Game is a simulation exercise instituted by Masayoshi Son when SoftBank Group Corp. was first established and which is recognized for helping to teach management skills.
The game involves each participant acting as the manager of a company in competition with other SoftBank Academia students, thereby fostering management skills such as strategy development and how to respond to circumstances with quick and appropriate decisions.

Generally held once a year, these provide a venue for information sharing and include presentations by Academia students on what they have been working on over the previous year. The Conference this year was held online and Academians were able to get to know each other even more without time/location constraints.

SoftBank Academia students take the lead in planning study groups on a topic that they want to learn more about. Students are free both to choose any topic they want and to participate in any study group that sparks their interest. Numerous such groups have been held in the past on topics such as AI, design & business, and trends in Silicon Valley. There have been more and more events held online recently and memebers of Academia share information without time/location constraints.

These projects are voluntary and run to their own schedule. Examples include special projects directly overseen by Masayoshi Son and collaborative projects undertaken in partnership with SoftBank Group companies. 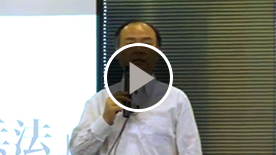 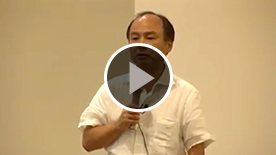 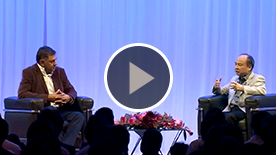 For me, Academia is a one-of-a-kind place where I can redefine how I spend my life and contribute to society while giving me a good look at the big picture of the trends of the time. Learning the art of corporate leadership from Mr. Son and exchanging opinions with fellow Academia students teaches me how to make decisions in managing a company, which is exciting.

Connecting with Academia students who have a management perspective is an asset. It is fulfilling being able to still do business together with the startup managers of my own age that I have met here and to get business advice from older-generation managers as mentors. 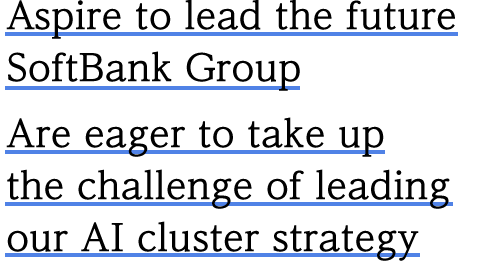 Since its opening in 2010 with Masayoshi Son as Principal, SoftBank Academia has been a forum for highly motivated challengers.

In the presentation program, students compete with proposals on real management issues facing SoftBank Group company managers. Most recently, we have used case study subjects that include the long-term growth strategies of SoftBank Corp. (“SoftBank”) and PayPay Corporation, leading to the acceleration of the “Cluster of No. 1 Strategy” of the SoftBank Group.
Students present their ideas, carefully considered from a manager's perspective, directly to management teams, including Principal Son and SoftBank President & CEO Junichi Miyakawa. The executives who are actually responsible for the business provide feedback, and their interactions with students have resulted in numerous business decisions and the creation of new businesses.

SoftBank Academia is composed of students from outside the SoftBank Group who entered the school after going through a highly competitive screening process, as well as employees selected from within the SoftBank Group.
We believe that the program is unique in that it also serves as a community where people are connected by their aspirations and engage in friendly competition with each other, transcending their personal attributes and positions. Academia students have built non-hierarchical and deep relationships of trust based on confidentiality, without being bound by their positions, and have freely exchanged opinions on their respective businesses and operations, thereby creating new partnerships.

Those who are willing to make use of SoftBank Academia and create bonds under a common vision will be greatly rewarded.
We are looking forward to receiving applications from highly motivated individuals.

How many are you recruiting this time?

Will there be any offering later on?

We will offer once a year in principle.

No, any nationality is acceptable.

No, academic background does not matter.

I currently live overseas. Can I apply?

Place of residence does not matter, but you are required to participate in lecture sessions as much as possible.

I am running a business on my own. Can I apply?

I don't have any business background. Can I apply?

Is there any age limit?

People aged over 20 to under-45 at the time of application are eligible.

Could you tell me about the examination process?

Do I need to submit any documents for the examination?

We proceed with the examination based on the information you enter into the online form.

How long does it take until the announcement of application results?

It takes approximately for three months. We will announce the final results in March 2023.

Can you tell me the place where second round and final examination are held?

The second round of screening will take place through Zoom this year. The final screening may be taken place on site at SofrBank Tokyo headquarter but we will inform you on the location once you pass the second screening.
For those who are living abroad or very far, we will also arrange screenings through Zoom so please make sure to contact us.

Will I be informed even if I don't pass?

Can I submit a video of my presentation or do it online instead of attending in person?

Even if the screening is held online (the second screening), we would like to talk to you in person so we generally ask you to make time for the screening. If you wish to send in a recorded version of your presentation, please contact us.

Do I need to submit any other documents at the time of application?

No, you don't. After enrollment, we will ask you to submit some documents. We will announce it only to the enrolled students.

Do I need to make any contract to join SoftBank Academia?

We will ask you to sign a Non-Disclosure Agreement.

How much is the tuition?

Is there any possibilities of being hired as an employee in the SoftBank Group if I am qualified for SoftBank Academia?

No, it has no relation to our recruiting activities.

If I am a university student and SoftBank Academia member, will SoftBank Group hire me after graduation?

Sorry, but you need to apply for post-graduate hiring.

Can I join SoftBank Academia without quitting my job?

Of course you can! Please remember you are required to participate in as many lectures as possible.

Could you prepare an interpreter for each session?

There will be interpretation if necessary.
English version of documents and manuals are prepared.

Can I attend the lecture via TV conference or telephone conference?

There are more and more programs held online starting this year.

Are the lectures supposed to be distributed by video or on the website?

No, the lectures are not distributed via live stream.
Some programs will be made available as on-demand video later.

Where do the lectures take place?

Programs are generally held at the head office of SoftBank in Tokyo but some of the events organized by Academiams are held online.

Are there going to be any other venues for lectures other than Tokyo?

There is no such plan at this moment.

How often are the lectures held?

About once or twice in two-three month periods. There are also workshops and other events organized by members unperiodically. The events are generally held on Wednesday.

Can I reschedule my class if I cannot attend?

No, you cannot change your class or dates.
Some programs will be made available as on-demand video later.

What time does the lecture start?

Normally, it is from 6pm or 7pm on Wednesdays, but the hours vary depending on the program. After your enrollment, we will let you know our program in detail each time.

How long are the lectures?

Each lecture is expected to last for 2 or 3 hours.

Is there a payment of travel expenses?

No. You will be responsible for the cost of your transportation.

When will be the enrollment?

When will be the graduation?

This is a long-term program to cultivate a successor for over 10 years, therefore there is no such concept as graduation.

Is there any enrollment period?

We regard one year as one period and if your ranking is in the Top 80%, you can stay for next period and continue to attend the lectures.On the other hand, if you are in the bottom 20%, you are required to leave.

Will you issue any certificates? (Certificate of enrollment, diploma, etc.)

Only a certification of enrollment will be issued.

Can I tell others that I am a student of SoftBank Academia?

You can tell anybody. However, any information you obtained through the lectures is subject to a Non-Disclosure Agreement.

Is it required to submit any recommendation letters from supervisors of my company?

It is not required. Submitting a recommendation letter will have no effect on the examination.

I applied last year and didn't pass.Can I apply again?

If I was replaced and once left SoftBank Academia, would I be able to apply again?

Yes, you can keep applying.

I work at one of SoftBank's group companies, should I apply through this website?

Please refer to the notice sent from your company.

Will feedbacks be given for the screenings?

There will be no feedback given.

How should I select the language for my presentation?

Please select either Japanese or English, whichever you feel more comfortable with. The judges will be Japanese. (subject to change)