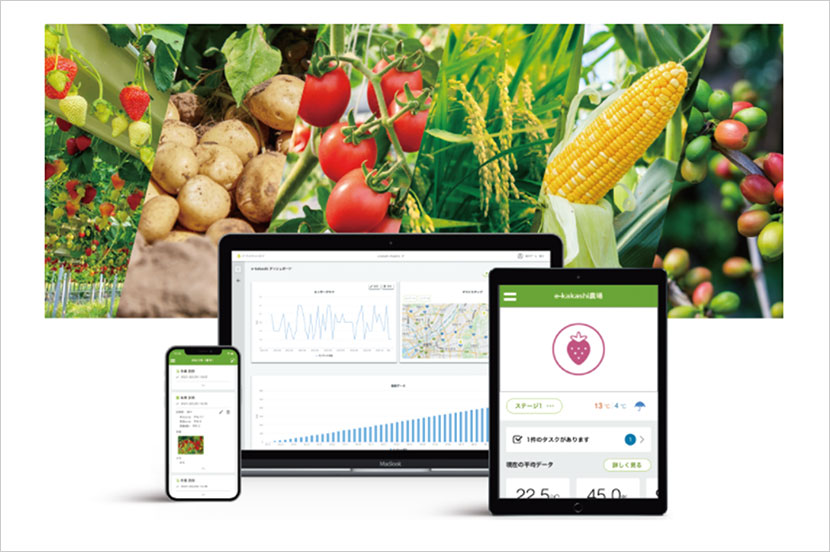 The AI-powered “e-kakashi,” an agriculture science and technology solution from SoftBank Corp. (TOKYO: 9434), made business news headlines in October with the launch of its advanced version. The e-kakashi collects and helps to analyze environmental data, weather, plant-growth-data and cultivation records to enable science-based farming. The Gateway in the new e-kakashi has a pre-tax price tag just under ¥100,000 ($880)—one seventh the cost of the company’s previous ¥750,000 ($6,600) model—yet it boasts greatly improved functionality and ease of use.

Takashi Togami, a project leader of e-kakashi at SoftBank notes that the original Gateway was an OEM product built to e-kakashi’s design for its exclusive use. “The technology has moved on since we first introduced the e-kakashi solution seven years ago,” says Togami. More significantly, he notes that the Gateway, manufactured by Tokyo Electron Device Ltd. to incorporate e-kakashi’s design requirements, is now commercially available exclusively for the Japan market.

Whereas the original Gateway required a wired power supply to operate, the new Gateway uses solar power, and is backed up by rechargeable nickel-hydride batteries to provide power for seven or eight days for when the sun doesn’t shine. It also uses a communication module to connect wirelessly to the Internet. 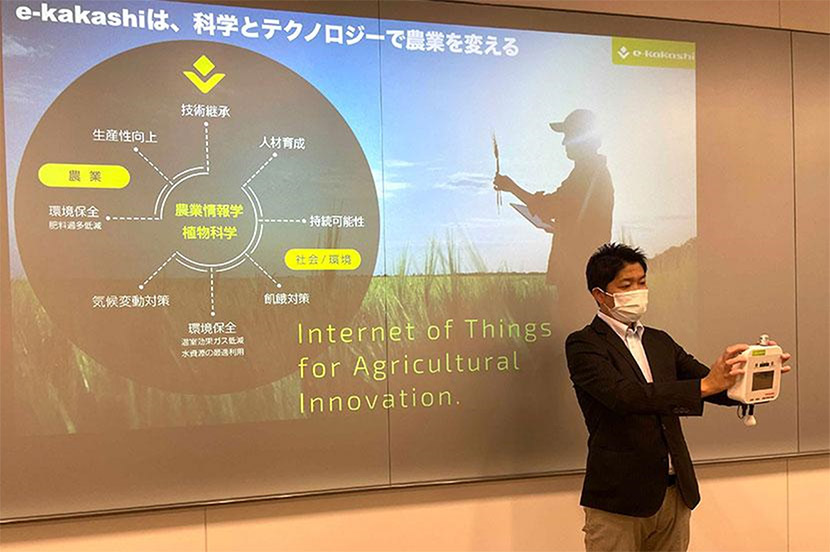 Togami shows the revamped model at a briefing held October 4, 2021

“The new Gateway is a stand-alone device that can operate in greenhouses or in the middle of a field,” says Togami. “All you have to do is insert the batteries, connect the sensors you want to use and switch it on.” An alert function lets a farmer know if battery power is running low, perhaps after a prolonged spell of overcast weather. The farmer can then replace the batteries with freshly charged ones in a timely manner. By contrast, the original model used a lithium-ion battery that was difficult to replace. If a problem arose, the user had to send the Sensor node back to e-kakashi for a battery replacement.

The Gateway’s area of coverage depends on the environment it is monitoring, and the kinds of data being collected. Monitoring and analyzing solar radiation, temperature and humidity data, for instance, helps users estimate a plant’s growth stages from seedlings all the way through to harvesting. In the case when solar radiation and humidity are average, one Gateway can cover a wide area.

“A Gateway positioned among fields of potatoes in Hokkaido, for example, could gather those kinds of data over a range of maybe 10 square kilometers,” says Togami. “In Colombia, where our Gateways are helping improve rice yields, such sensors can work over distances as wide as 20 square kilometers.” On the other hand, in measuring moisture in the soil, they measure only their immediate surroundings because soil conditions can change over shorter distances. 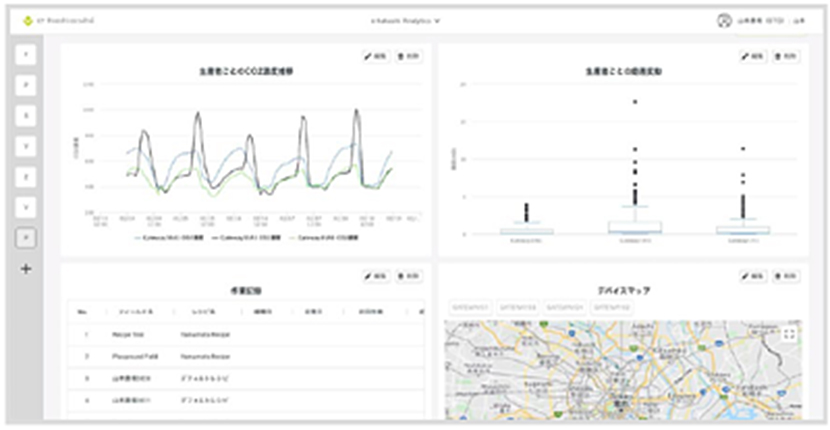 e-kakashi Analytics is a web-based app

Also, for the needs of a wide range of users, four new applications and respective functions for each were introduced: e-kakashi Navi, Note and Recipe Studio, which are free, while the fourth, e-kakashi Analytics, is a fee-based application. e-kakashi Navi provides a user with environmental data of current field conditions, including a crop’s growth stages, weather forecasts, any abnormalities and to-do tasks. The task-management-app e-kakashi Note is used to record work schedule for fertilization, irrigation and growth information.

For example, a recipe for cultivating a given plant might lay out the amount of water or fertilizer needed and when it should be applied, the temperature required for optimal growth, and an estimate of harvest time, and so on. Farmers who follow these instructions can expect to produce successful crops, conditions permitting. Since the experts’ and instructors’ knowledge can be converted into an electronic manual, it is easy and useful for passing on cultivation techniques.

“Previously, no such system existed for the application of such expert knowledge,” says Togami. “This is a major step forward in advancing science-based farming, and in dealing with the issues the agricultural industry is facing.”

Like a number of other industries in Japan, agriculture is suffering from a loss of workers as the birth rate declines and the population ages. It doesn’t help matters when older farmers retire, taking with them decades of experience that could benefit new farmers entering the industry. e-kakashi’s work in science-based farming and making its database available from small-scale farmers to experts in the agriculture field is helping not only to preserve such knowledge, but it is helping create new cultivation-knowledge based on data and scientific investigation.

And the results are proof of just how effective e-kakashi’s approach to farming can be. One example is of young farmers seeking to learn to grow strawberries in greenhouses in Munakata City, Fukuoka Prefecture. Looking for help from older farmers, they were thwarted by the answers received. The problem was that veteran farmers made decisions intuitively based on years of experience, and so were unable to explain well why they did what they did and when they did. This prompted the head of the central government’s Agricultural Promotion Section in Munakata City to ask e-kakashi for help. Munakata City installed Sensor node in some of the greenhouses, and after collecting and analyzing the data, it was able to answer the young farmers' questions.

“Consequently, today, the farmers of specialty strawberries in Munakata City have increased yields substantially using our approach to cultivation,” says Togami. “And their sales have risen by 800,000 yen (approx. $6,900) per 0.1 hectare.” In other projects, the use of e-kakashi’s science-based approach has seen rice yields in Tohoku rise by 10 percent, while the previously noted project in Colombia, has been able to better predict rice harvesting, which can make it possible to increase productivity by 23 percent.

Togami became interested in the application of science methods to farming when he studied environmental science, including the use of remote sensing in agriculture, at Charles Sturt University, in Australia. On returning to Japan, he obtained a Master’s degree and a Ph.D. in research related to agricultural information and communications technology from Mie University.

In putting his knowledge to work at e-kakashi, Togami developed a philosophy on farming that is guided by environmental conservation. “If we put too many burdens on the environment just to pursue productivity in the short term, farming will become unsustainable. But by applying science to farming, we can reduce, for example, the use of fertilizers and methane gas emissions, and the amount of water being used, while at the same time increase productivity without harming the environment. This is what e-kakashi is working to do. Agriculture goes back thousands of years in human history. Our philosophy is to drive the Information Revolution with science in agriculture and solve issues humans are facing by using e-kakashi.”