On May 11, 2022, SoftBank Corp. (TOKYO: 9434) President & CEO Junichi Miyakawa presented earnings results for the fiscal year that ended on March 31, 2022 (FY2021). At the press conference held in Tokyo, Miyakawa also gave forecasts for the current fiscal year (FY2022) and outlined his plans for FY2023 and following years. 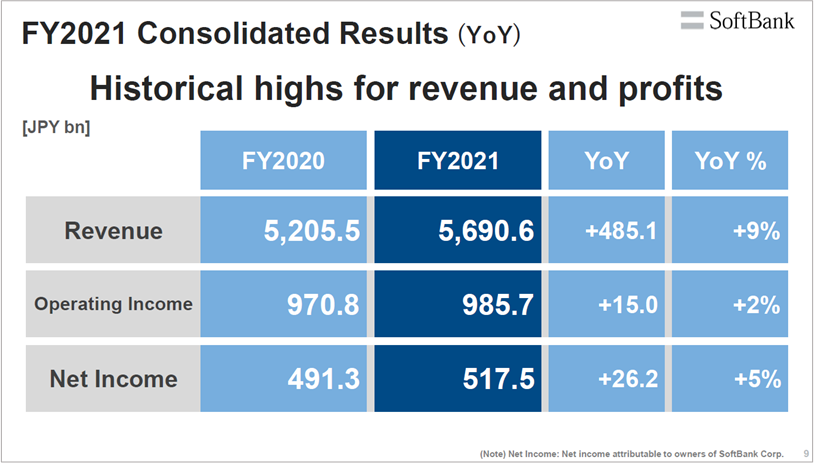 Miyakawa began by reviewing results for FY2021. Consolidated revenue increased 9% year-on-year (YoY) to 5,690.6 billion yen, a historical high, thanks to revenue growth at the Consumer, Enterprise and Yahoo! JAPAN/LINE segments.

With these results for FY2021, SoftBank Corp. achieved historic highs in revenue, operating income and net income for four consecutive fiscal years since listing on the Tokyo Stock Exchange.

Forecasts for continued growth in FY2022 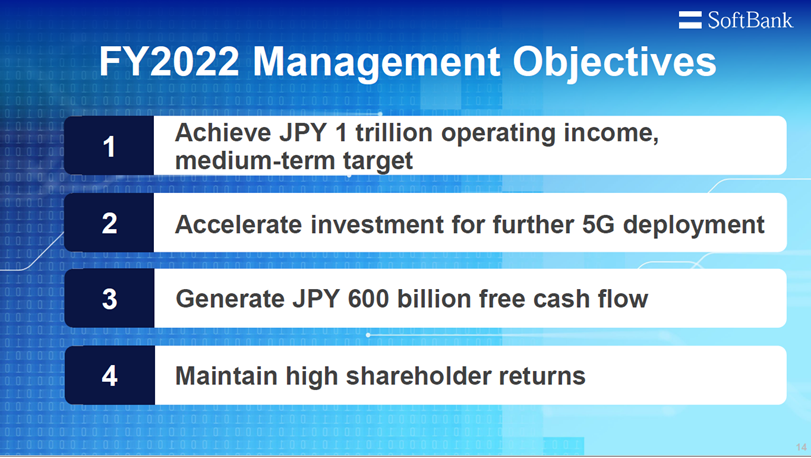 Miyakawa then turned to forecast targets for FY2022 and measures to achieve them. He first discussed SoftBank Corp.’s objective to achieve 1 trillion yen or more of operating income in FY2022. While the Consumer segment is expected to see a segment income decrease due to the impact of continued mobile service price competition and other factors, the Yahoo! JAPAN/LINE and others segment is expected to largely offset this negative impact due to making PayPay Corporation a consolidated subsidiary, among other factors. 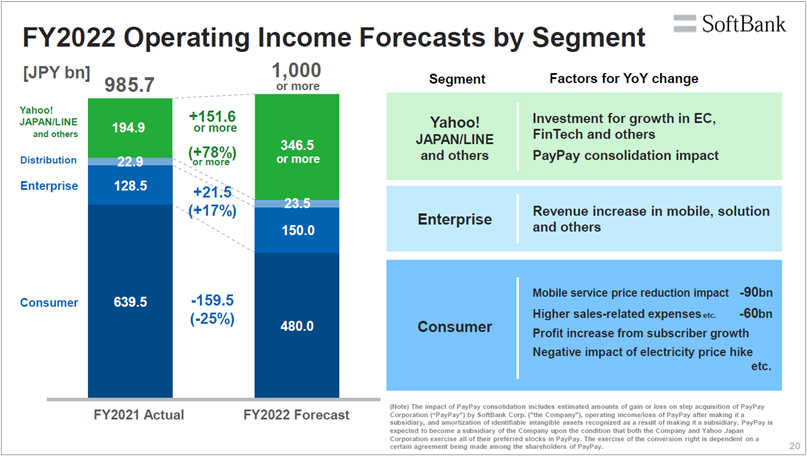 Impact of mobile service price reductions expected to peak out

Miyakawa said he expects the impact of mobile service price competition to bottom out in FY2022 due to fewer cyclical handset upgrades, which sees customers switching to new price plans, after FY2022. 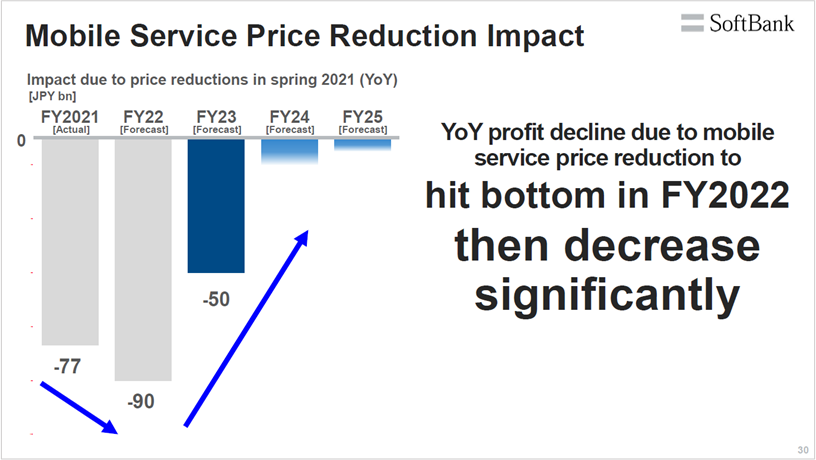 Miyakawa also noted that fixed cost reductions in FY2023 and thereafter will contribute to sustained operating income growth. He explained the SoftBank Corp. is now entering a period of decreased depreciation on its network assets after high initial capital expenditures, and that operating expenses will decrease as 3G, PHS and ADSL network equipment is phased out. 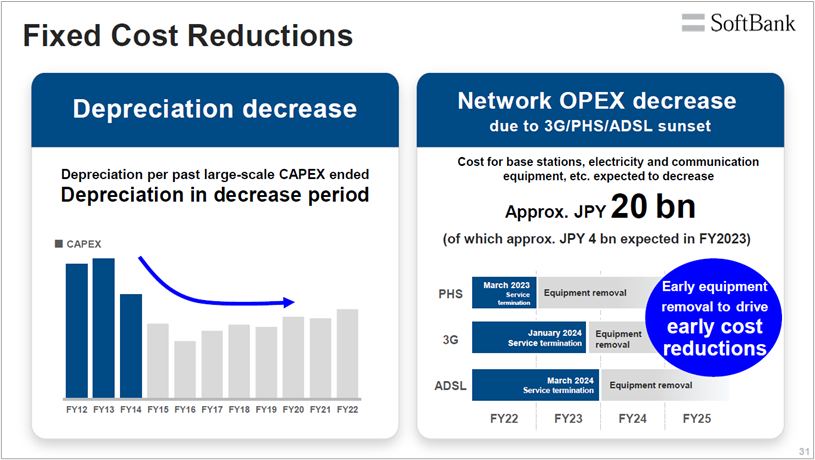 The Enterprise segment, which already has a strong track record among large-scale corporations, will newly target small and medium-sized enterprises (SMEs), a market worth 6.8 trillion yen according to the IDC Japan IT Market Forecast. Miyakawa explained that SoftBank Corp. will collaborate with group companies like PayPay and ASKUL, which already have large SME customer bases, to develop new customer relationships. 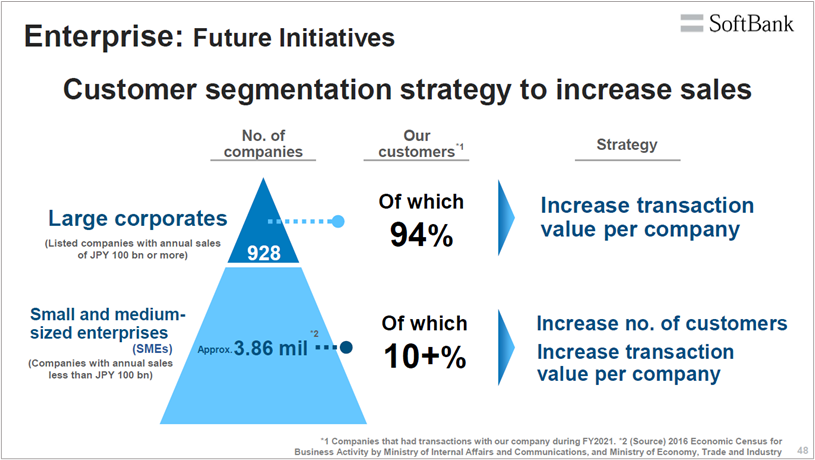 Miyakawa said he expects net additions for mobile subscribers continue to recover, and SoftBank Corp. will aim to have 30 million smartphone subscribers in FY2023. He emphasized synergy effects where, in addition to introducing mobile customers to the services of group companies, customers attracted to group company services like Yahoo! Shopping and PayPay will also be introduced to SoftBank Corp.’s mobile services. 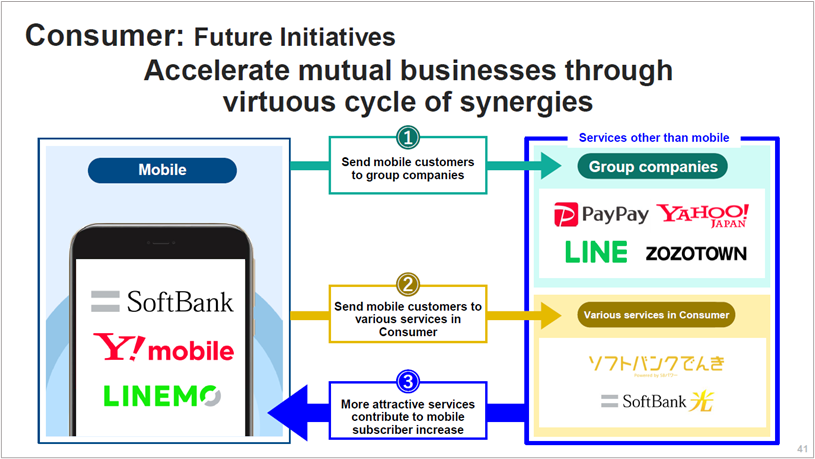 As an initiative for future growth, he also explained that the Yahoo Japan/LINE segment will expand its ecosystem by promoting the cross-use of services, such as point usage and ID linkage, and that PayPay, which is expected to become a consolidated subsidiary in FY2022, will increase revenues from system fees and expand value-added services for merchants, as well as for financial services.

During the question and answer session that followed the presentation, Miyakawa commented on SoftBank Corp.’s future direction. “A year from now I’d like to explain in more detail, but over the long term, ideally SoftBank Corp. will be a company where our revenues are weighted one-third telecommunications and two-thirds non-telecommunications, with both businesses growing.”