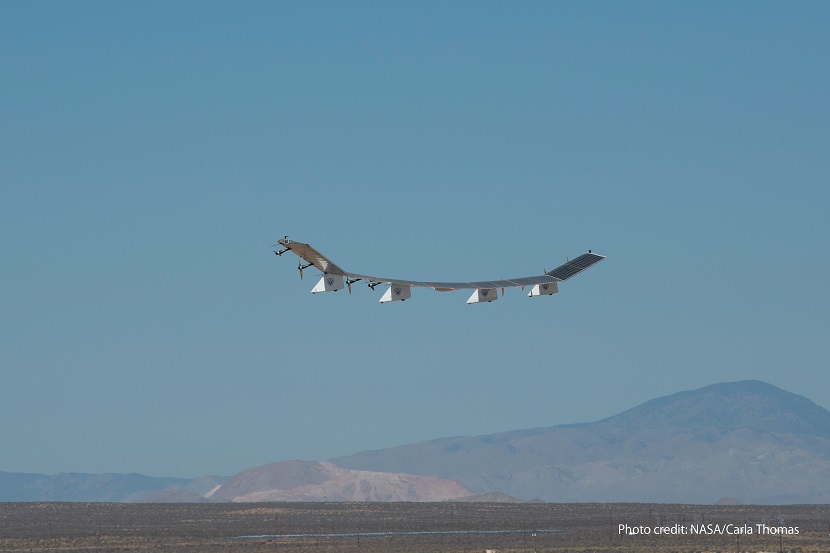 Imagine an unmanned aircraft circling the stratosphere, acting as an airborne base station to smoothly transmit radio waves to mobile devices below. That future is not as far off as it seems.

In April 2019, SoftBank Corp. (TOKYO:9434) announced the development of the High Altitude Platform Station (HAPS) project through its subsidiary HAPSMobile Inc. in cooperation with partner AeroVironment, Inc., and the development of an unmanned aircraft system, HAWK30. The aircraft will serve as a communication platform that circles 20 kilometers above ground in the stratosphere.

Read on for a deep dive into HAPS technology, which has been moving steadily closer to practical implementation, as evidenced by HAWK30’s successful test flight at NASA Armstrong Flight Research Center.

Many people are familiar with antennas on rooftops and metal towers. Usually base station antennas for mobile phone services are installed in relatively high positions to deliver radio waves over wider areas. This positioning also overcomes the difficulty of receiving radio waves if there are buildings or other obstacles that come between the base station antenna and mobile devices. As a result, many tower-type base stations have antennas positioned about 40 to 50 meters above ground. The higher the tower, the wider the area that can be covered by one base station and the less likely it is for obstacles to interfere with the radio waves. There is of course a limit to how tall a tower can be, however. This is where HAPS—a technology that transmits signals from a base station atop an aerial vehicle in the sky—comes into play.

With current technology, a general-purpose base station can transmit signals at a straight-line distance of about 100 km, so if a base station was created at a height of 20km above ground in the stratosphere, coverage would extend to an area of 200km in diameter. By this calculation, while tens of thousands of existing terrestrial base stations would be necessary to cover the entire Japanese archipelago, the same area could be covered by just 40 HAWK30s. 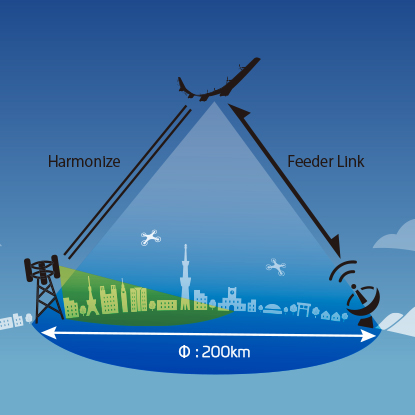 HAPS has other benefits, too. Its coverage area is so wide that out-of-range areas would also be greatly reduced, making coverage possible even in mountainous terrain and remote areas. It would also enable stable Internet environments in developing countries where communication networks have yet to be established. HAPS could also be a useful technology in the event of disasters, such as earthquakes, when terrestrial base stations may get damaged and knocked out of operation.

Stratospheric base stations also offer greater compatibility with drones and other aircraft.

Why go to the stratosphere?

Most people would probably find it difficult to answer the question, “How fast are radio waves transmitted?” and yet they could probably say how fast light travels (approximately 300 million meters per second or 3.0x108 m/s). Interestingly, both light and radio waves are the same type of electromagnetic wave and their speed is finite.

In that sense, satellite signals can be thought of as radio waves from the sky. The main difference from terrestrial radio waves is the distance they have to travel. 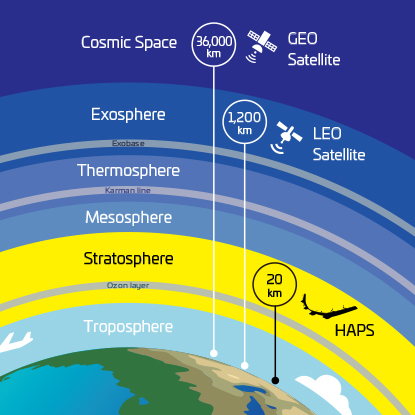 An additional benefit of HAPS is that it allows radio waves to be transmitted through free space without losing power density; although in practice they do become weaker as the distance travelled increases (the square of the distance is proportional to attenuation).

As power density decreases, so does the quality of communication (it may be helpful to imagine the signal bars displayed on a smartphone). Since HAPS is relatively close to the ground, the power density is approximately one million times that of a GEO satellite and approximately ten thousand times that of a LEO satellite, allowing HAPS to provide high-quality communication services to existing mobile devices.

Why is the stratosphere just now attracting attention?

Stratospheric platform research and development was originally a national initiative for Japan. As a part of the Millennium Project, in 1999 Japan’s National Institute of Information and Communications Technology (NICT) jointly developed an unmanned aerial vehicle with AeroVironment called the Pathfinder-Plus, which was powered by a solar cell and fuel cell system. However, as surface telecommunications networks grew in number, high-altitude platform initiatives gradually fell by the wayside.

In truth, the conditions required to install base stations in the stratosphere have not changed significantly since the time of the Millennium Project. So why is the stratosphere drawing attention now?

The answer lies in the advancement of solar power generation and power storage technology. For unmanned aerial vehicles equipped with base stations to continue to fly, it is necessary to secure sufficient energy from the sun. The vehicle must also store enough electricity to continue flying and transmitting radio waves after the sun has set.

The level of technologies that enable power management and consumption reduction has finally increased the commercial feasibility of unmanned aerial vehicle base stations.

HAPSMobile developed its unmanned aircraft, the HAWK30, for use with its stratospheric communications platform. Installed with solar panels and ten propellers attached to its 78-meter wingspan, it flies at an average speed of 110km/hr. The aircraft's large size is necessary for it to be able to satisfy certain conditions, such as the ability to fly while sending high-powered radio waves and the ability to generate sufficient power for unmanned flight using solar panels. 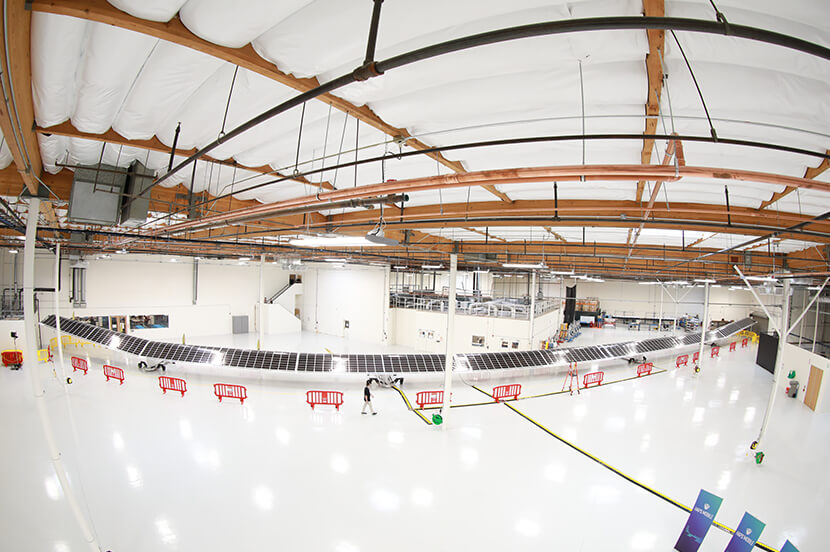 The "30" in the HAWK30 name refers to the fact that, at a latitude of plus or minus thirty degrees from the equator, the HAWK30 can fly 365 days a year. In fact, the HAWK30 can fly even in high-latitude areas like Japan, which lies between the 24th and 46th northern parallels, most of the year, with the exception of winter months when daylight hours are few. A "HAWK50" model, which can fly plus or minus fifty degrees from the equator, is now in development with the goal of enabling stable service regardless of the season.

Plans are also underway to make the HAWK30 communications network less susceptible to radio wave interference, and to ensure smooth handover between the HAWK30 and terrestrial base stations. Payloads other than those directly supporting user communications, such as fixed wireless equipment and onboard cameras that would provide remote monitoring services, are also being planned for the aircraft system.

Challenges to doing business in the stratosphere

There are still many countries and regions around the world where the development of the Internet has been delayed due to insufficient power supply, security issues and other barriers. Some of these areas have access to satellite-based Internet, but satellite technologies have their own barriers, such as hardware failures, speed and bandwidth issues, and pricing. With stratosphere-based technology, however, it will be possible to provide high-quality Internet services that are fast, affordable and with high bandwidth across all areas. For that reason, HAPSMobile is strongly committed to this new technology.

HAPSMobile aims to provide various services, from mobile and fixed communications to surveillance monitoring and Internet connectivity, by operating the HAWK30 and other vehicles, ground relay stations and backbone network connectivity.

Looking to the future of what is possible with a truly global communications network while complying with all relevant laws and regulations, HAPSMobile aims to achieve mass production of the HAWK30 and commercialization of its services by 2023. 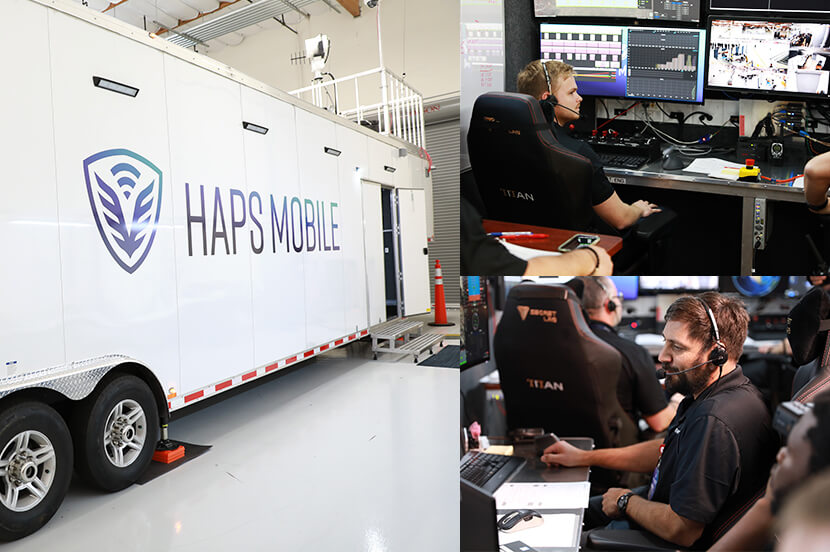 HAPSMobile has formed strategic alliances with other companies in the stratosphere business. In April 2019, the company announced its partnership with Loon, a subsidiary of Alphabet, which is the parent company of Google.

Loon is a service provider that uses high-altitude balloons that drift on stratospheric air currents as a means of providing Internet connectivity. By using predictive AI technology to map out viable flight routes, Loon orchestrates a mesh network of balloons that communicate with its ground stations. The idea is to utilize mesh networks to provide Internet service with greater ease, including in areas where coverage was previously unavailable.

While these balloons, which are at the mercy of stratospheric currents, embody a best-effort delivery concept, the HAWK30 is based on the concept of targeted delivery to specific areas. Both companies are expected to make significant breakthroughs in the stratosphere business through their efforts to improve bandwidth utilization, integrate base stations, systematize aircraft management and collect data on damaged sustained by hardware in the stratosphere.

HAPSMobile is also partnering with companies like Facebook to provide gigabit-class Internet access to users with its payloads of 60 GHz “fixed wireless” technology on the HAWK30. The company is also cooperating to standardize HAPS spectrum, which is essential for the realization of the stratosphere business. Both companies plan to collaborate to spread groundbreaking stratospheric Internet solutions around the world.

Various hurdles remain, such as authorizations from aviation authorities, but preparations to begin providing services in 2023 are underway.

Beyond Carrier, Beyond Japan

SoftBank Corp. has grown in step with the Internet and has developed communications infrastructure all over the world. SoftBank Corp. is now seeking to revolutionize the future of mobile networks with its HAPSMobile business alongside Internet champions like Alphabet and Facebook. 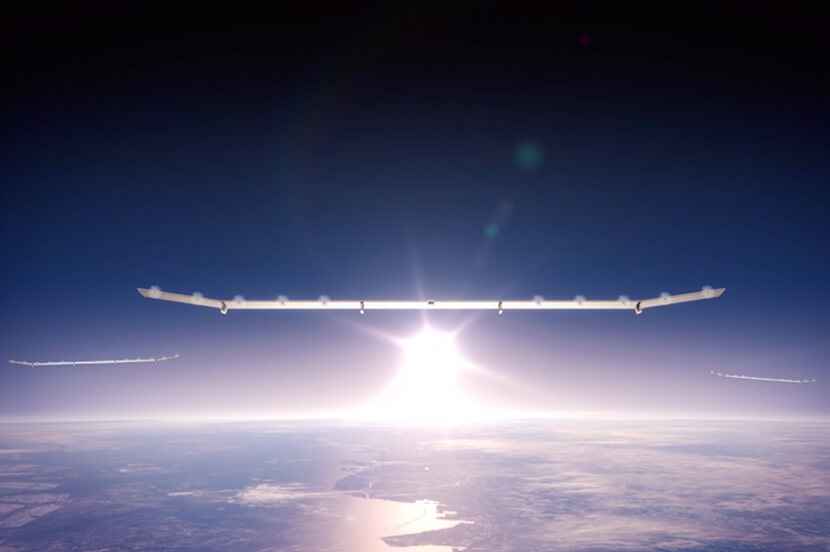