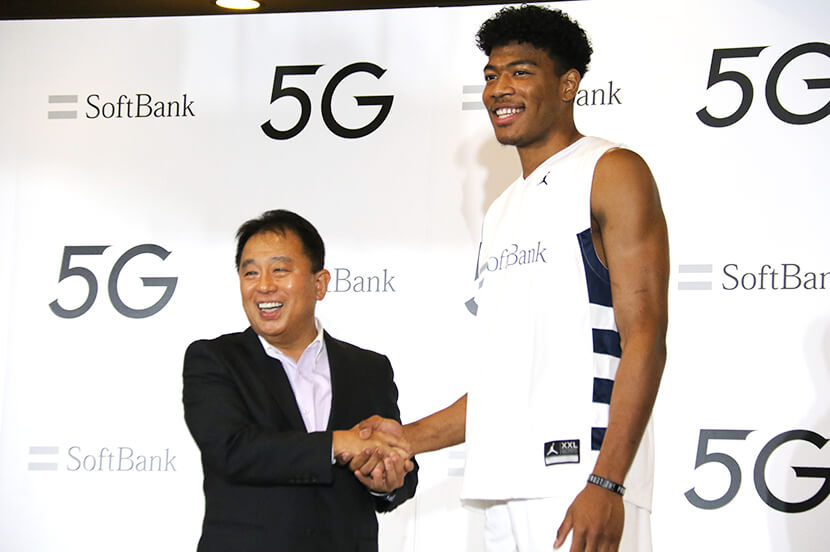 On August 7, 2019, SoftBank Corp. (TOKYO:9434) held a pep rally at its Tokyo headquarters to show support for the Japan men’s basketball team, also known as the Akatsuki Five, ahead of the 2019 FIBA World Cup. During the event, SoftBank presented a check for 300 million yen (approximately 2.8 million USD) to support the Japan Basketball Association. As the top partner for B.League--the premier professional men’s basketball league in Japan--since its launch in 2016, SoftBank showed its long-standing commitment to the sport.

During the rally, SoftBank took the opportunity to make another important announcement: the signing of the Japan team’s star player Rui Hachimura to promote its upcoming 5G commercial services. As Japan’s first-ever first-round draft pick for the NBA, the Washington Wizards rookie is famous for breaking new ground.

SoftBank Corp. Representative Director & COO Jun Shimba said, “With 5G commercial services set to start in March 2020, we’re looking at ways to harness the power of 5G to launch new services, and basketball is one area we’re looking at so people can enjoy new ways to watch sports.” 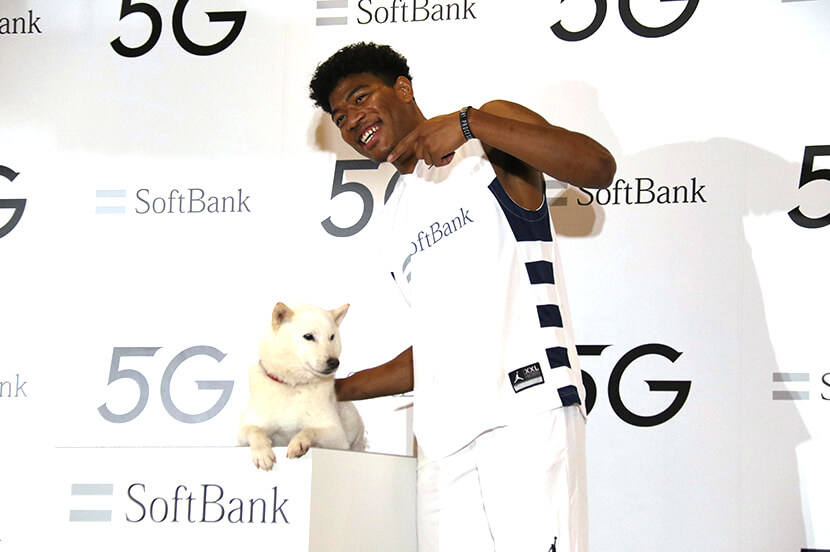 Introducing Hachimura as the new face of SoftBank’s 5G services, Shimba said, “People are saying that Hachimura will change the face of basketball in Japan. Since 5G is a state-of-the-art technology that has the power to change the world, it was natural for us to choose him to represent our 5G service.”

In response, Hachimura said, “My family has been using SoftBank services since I was a kid. So I’m really happy to be part of this sponsorship and I look forward to collaborating with SoftBank.”

Talking about the TV commercial in which he stars, Hachimura said, “It might sound funny for me to say this, but I think I look really cool in the commercial. The video was shot in a way that shows real power and speed, both for 5G and my playing.” 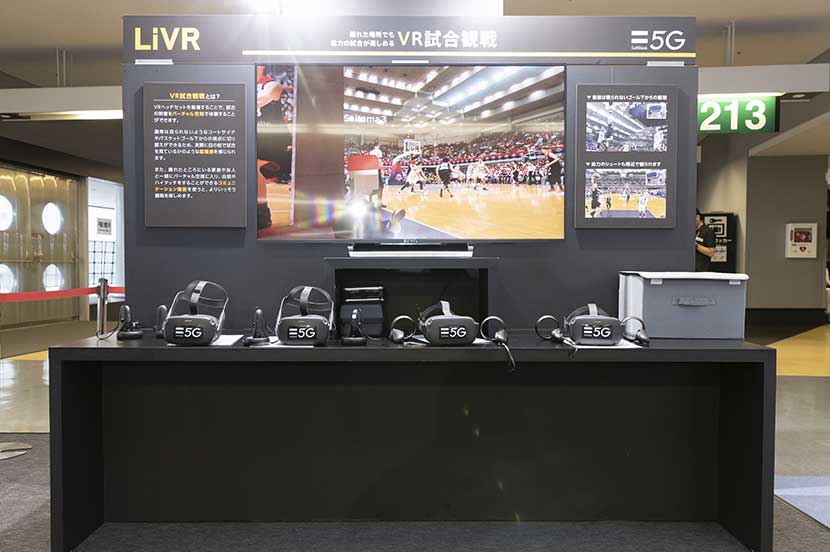 Ahead of the FIBA World Cup that took place in China from August 31 to September 15, 2019, the Japan national basketball team, including Hachimura, played warm-up games at the Saitama Super Arena near Tokyo. To give sports fans a sense of how they can enjoy watching sports in the future, SoftBank showcased its pre-commercial 5G services at the venue.

Visitors experienced VR-based game viewing, which used high-speed, high-definition video feeds from behind the baskets on both sides of the court and from the officials’ table at courtside. Wearing VR goggles, viewers could see players appear right before their eyes in 3D. Participants could also switch between the three camera angles to follow the game action as they liked.

A short demo can be seen here. 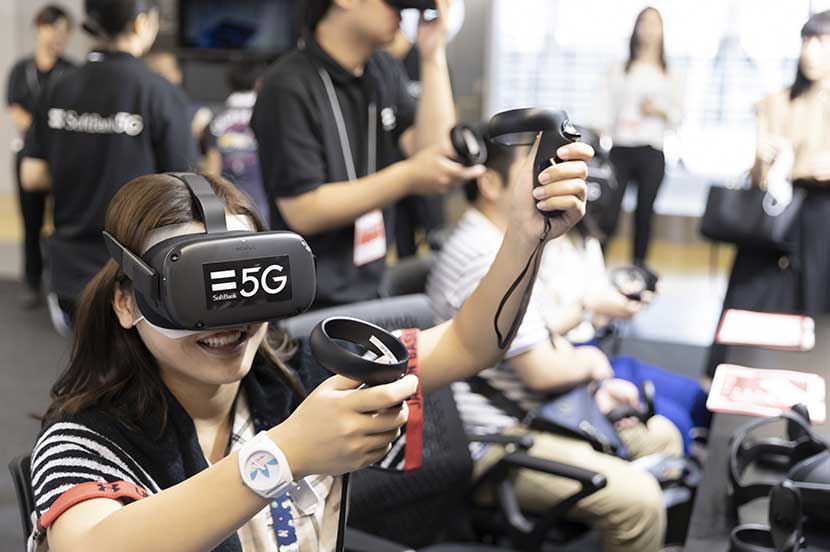 Viewers with VR goggles could also share the same virtual space and communicate with other participants. In the future, the technology promises to enable spectators from different locations to watch games together, and even make it possible to give other people high fives in the virtual space. It might not be long before “VR game tickets” for home viewing become available. 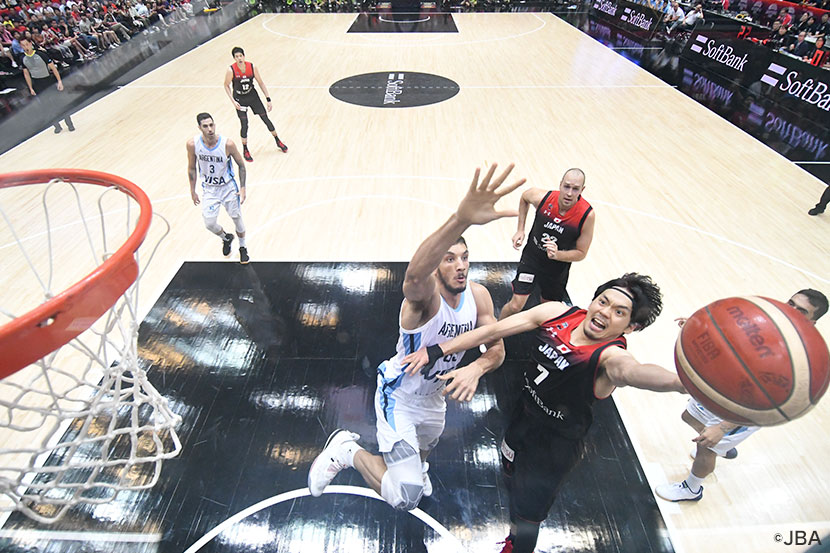 A shot from a VR camera at the Japan vs. Argentina game. VR viewing promises to have a lot of impact.

Holograms pop up in 3D when viewers don AR glasses.

AR holograms was another interesting technology displayed by SoftBank during the warm-up games. The technology lets people watch basketball on a tabletop, and with AR glasses, they can see players in the form of 3D holograms. Since the images are in 3D, people can watch the game from any angle on the tabletop, which is shown as a basketball court. What was once the domain of science fiction is fast becoming a reality!

With commercial services set to launch in 2020, it remains to be seen how exactly 5G’s high-speed, high-capacity, low-latency and massive connectivity will be applied to services. But as SoftBank’s pre-commercial service demonstrations at the Saitama Super Arena showed, 5G promises to make sports viewing more enjoyable and accessible.