Transforming from a mobile carrier with diversified businesses and revenue streams

Miyauchi began by addressing parent company SoftBank Group Corp.’s recent sale of 1 billion SoftBank Corp. shares, which reduced its ownership stake from 62% to 40.2%. “General shareholders now make up the majority of our shareholder composition, and the number of shareholders is now among the largest of Japanese companies at 910,000. We’re very pleased with this number but at the same time we’re also aware of our increased responsibilities,” he said.

“When we first went public in December 2018, mobile communications, fixed-line communications, enterprise and distribution were the pillars of our business,” he said. “Since then, we’ve diversified our revenue sources, and the ratio of sales and profits outside mobile communications has increased. The non-telecom businesses that support our ‘Beyond Carrier’ growth strategy have become growth drivers.” 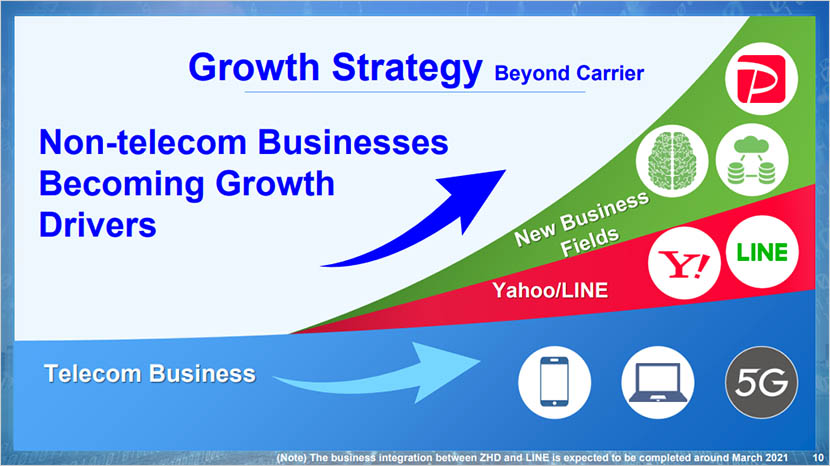 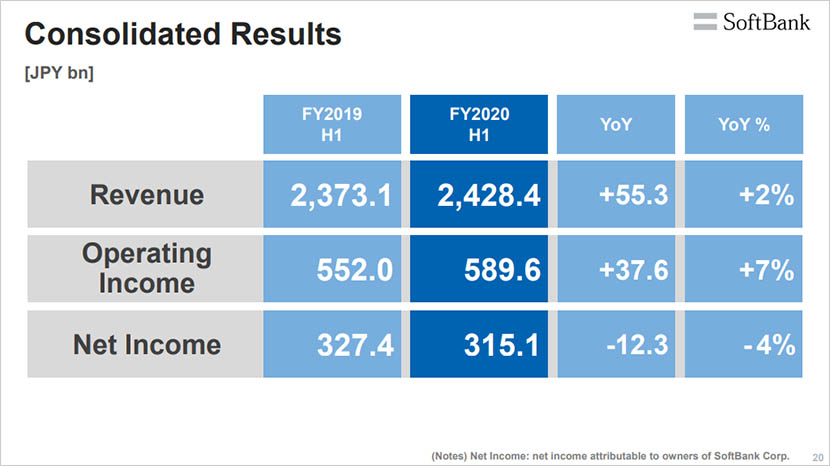 Turning to the FY2020 H1 results in detail, Miyauchi noted that revenues increased despite the impact of COVID-19. “While there was a slight decline in revenue in the Consumer segment, the Yahoo and Enterprise segments saw steady revenue increases,” he said. “Overall, our business is performing well.”

In FY2020 H1, the Enterprise segment registered a 7% year-on-year increase in revenue and an 18% year-on-year increase in operating income. “Heightened demand for telework and digitalization helped drive sales for our cloud, IoT and security solutions, which are business areas we’ve focused on from before,” Miyauchi noted. “We’ll work to maintain this double-digit growth in Enterprise to further increase sales and profits.”

To continue on this growth trajectory, the Enterprise segment is undertaking what it calls three major digital revolutions: digital communication, digital automation and digital marketing. Digital communication means taking an online and offline hybrid approach to client sales activities and varying workstyles to increase productivity, and with this the number of contacts with corporate customers increased by five times compared to Q2 in FY2019. Digital automation refers to using automated work processes to reduce costs and increase efficiencies, while digital marketing is utilizing big data to bolster marketing and sales. 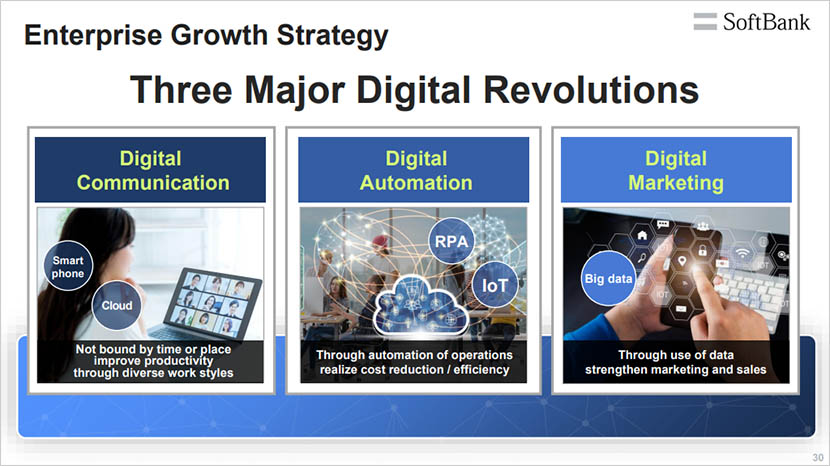 The Yahoo segment secured increased sales and profits thanks to growth in commerce. “We will increase investment into commerce to become No. 1 in Japan in terms of transaction value,” Miyauchi declared. While ad placements decreased due to COVID-19, media service access saw an increase. And through synergies with SoftBank, ad placements increased by one-and-a-half times over six months.

PayPay continued on its growth trajectory, exceeding 33 million users in October 2020, and it also saw a five-fold increase in the number of payments in the space of one year. Miyauchi noted that PayPay is being positioned as a gateway to drive synergies across other group businesses such as banking and investing to create a fintech ecosystem. 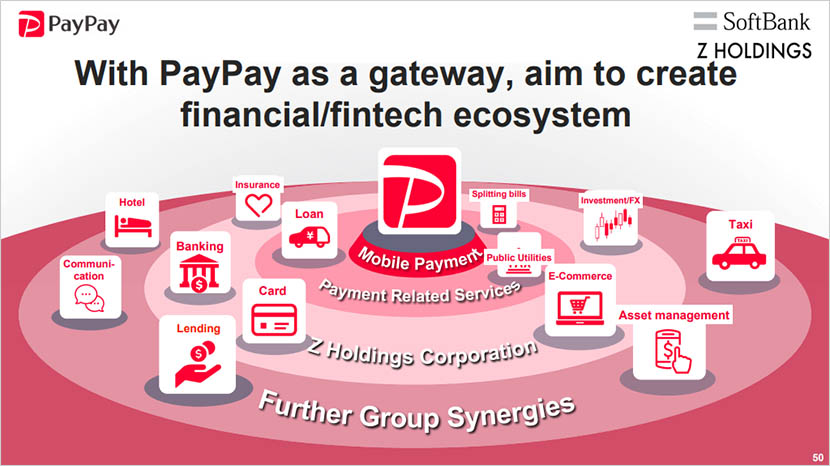 In the Consumer segment, H1 revenue slightly declined year-on-year partly due to a decrease in handset sales. On the other hand, service revenues increased, and H1 operating income saw a steady increase year-on-year. Reviewing the trend over the past five years, Miyauchi pointed out that the mobile communications charge portion of revenue and operating income is decreasing annually. Miyauchi used this data to illustrate that SoftBank’s dependence on income from mobile price plans has lessened over the years.

Miyauchi took the opportunity to explain how mobile pricing has evolved. “We’ve been working to lower mobile prices -- if you look at the price of 1GB five years ago, we’ve lowered the 1GB unit price by more than 80%, and the average unit price per user has declined by 20% in the past years. On top of that, we just announced a new large capacity data plan for our ‘Y!mobile’ brand, and starting in the spring of 2021, we’re eliminating MNP transfer out fees.”

Addressing concerns that revenues could decrease, Miyauchi expressed confidence in the future. “With our multi-brand strategy we’ve acquired new customers, which has in turn increased revenues. We’ll aim to grow our mobile business by expanding our smartphone subscriber base,” he said. 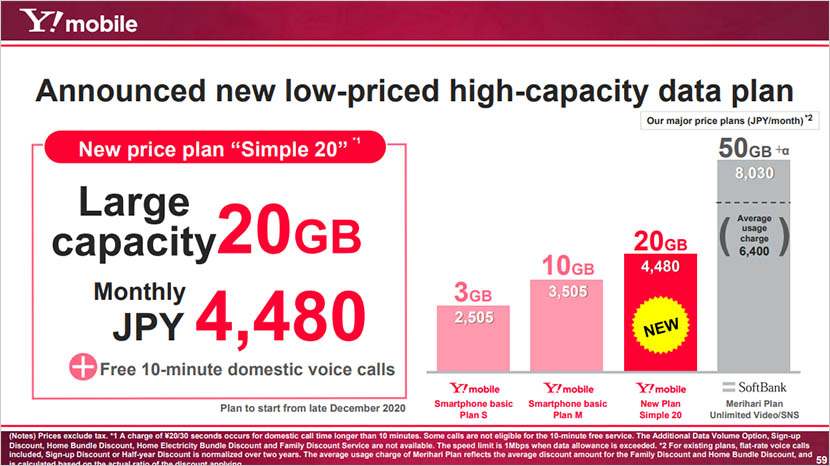 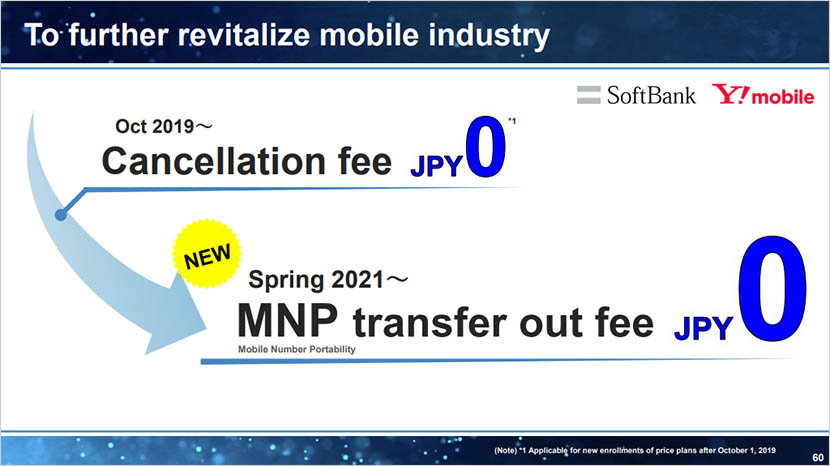 Miyauchi also discussed the importance of investing in the future. “Since we entered the mobile communications business, we’ve worked to provide an environment that’s comfortable for our customers. In the 14 years since we started, our capital expenditure has been 5 trillion yen,” he stated. “As a result, our network has been evaluated as one of the world’s best in terms of quality. And over the next 10 years we plan to invest 2.2 trillion yen in 5G and 6G.”

Representative Director & CTO Junichi Miyakawa responded to reporter questions on the topic of next-generation networks. “We applied to set up 147 5G base stations by the end of FY2020 initially, but with the fast pace of construction moving ahead,we now expect the number to be 10,000. Based on our experience with increases in user traffic, in 10 years time we’ll need a minimum of 35,000 base stations. We’re thinking of how we can build a construction organization to do this,” he said. 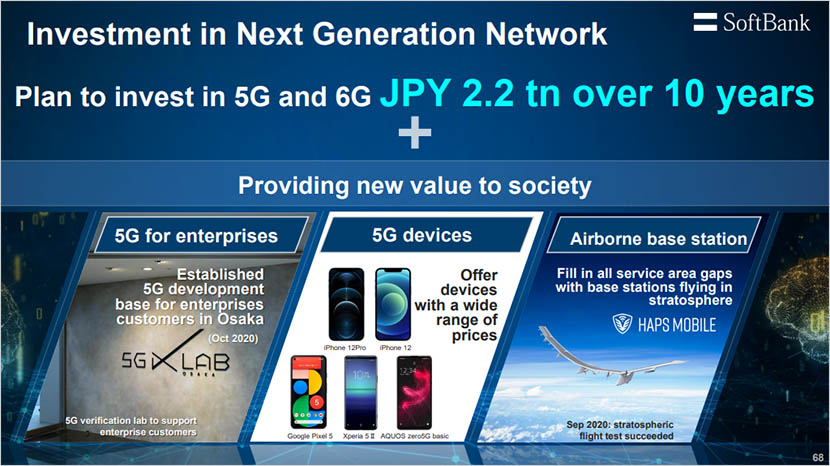 In closing, Miyauchi stressed the importance of connectivity. “If we cover the whole country with 5G connectivity, I believe Japan can make a true digital shift. Adding HAPSMobile, which can cover hard-to-reach areas, we can make connecting the unconnected parts of the world a core business. So we’re prepared to invest in next-generation networks that will form the foundation of our growth strategy.” 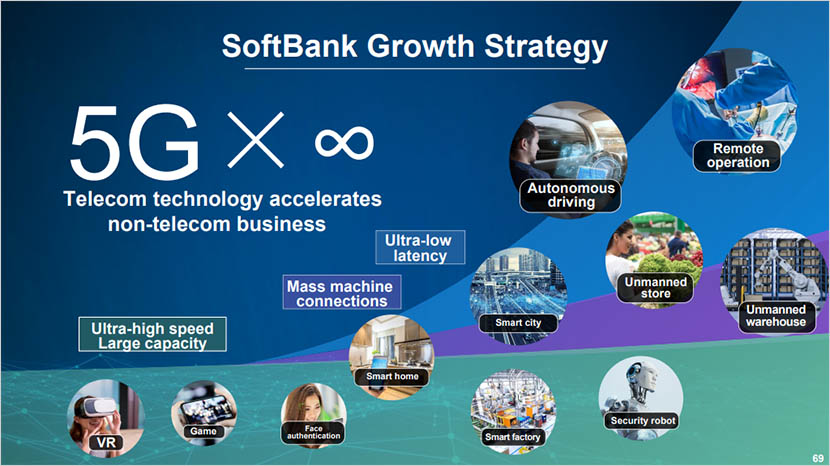