More than two-thirds of the world’s population—5 billion of us—now subscribe to mobile services according to the GSMA, an industry organization that tracks all things mobile. It’s hardly surprising, then, that 4G networks are straining to cope with the growth in user traffic—as you may have discovered when trying to use your smartphone in a packed sports stadium. This is why mobile wireless operators like SoftBank Corp. (TOKYO: 9434) are rolling out 5G mobile technology that is providing much greater bandwidth (capacity) with far higher transmission speeds.

But merely beefing up a cellular network’s communication muscle is not enough in itself to ensure the use of sophisticated new types of network services and applications that are in the offing: services such as multi-access edge computing (MEC) and network slicing.

MEC is a network architecture that brings cloud computing services and applications closer to end users who, metaphorically speaking, are located at the edge of a network. This has multiple benefits, including better security and data management, lower latency, and improved processing performance, given users no longer have to send their data out across the networks for processing. Network slicing is a technique to divide a single network into multiple distinct virtual connections with dedicated computing resources that let network operators “slice” or apportion sections of their networks for specific customer use.

So what is needed to enable these new services to work in a 5G mobile environment?

“First, we need to understand that mobile networks are built on a completely different architecture from fixed networks, which used to be the main way to access the Internet,” says Satoru Matsushima, a Technical Meister at SoftBank Corp. “But with mobile devices making ever more use of the Internet, the existing mobile network architecture is becoming outdated. This is particularly the case with the introduction of 5G.” He adds, “More and more users are using mobile networks as an alternative to fixed networks, as we see with our home broadband service ‘SoftBank Air.’ That’s why we need to integrate mobile technology with the technology of the Internet.”

To help this integration become a working reality, SoftBank has developed a breakthrough technology called SRv6 MUP. To understand what it is and does, it helps to look at its component parts individually.

All about SRv6 MUP 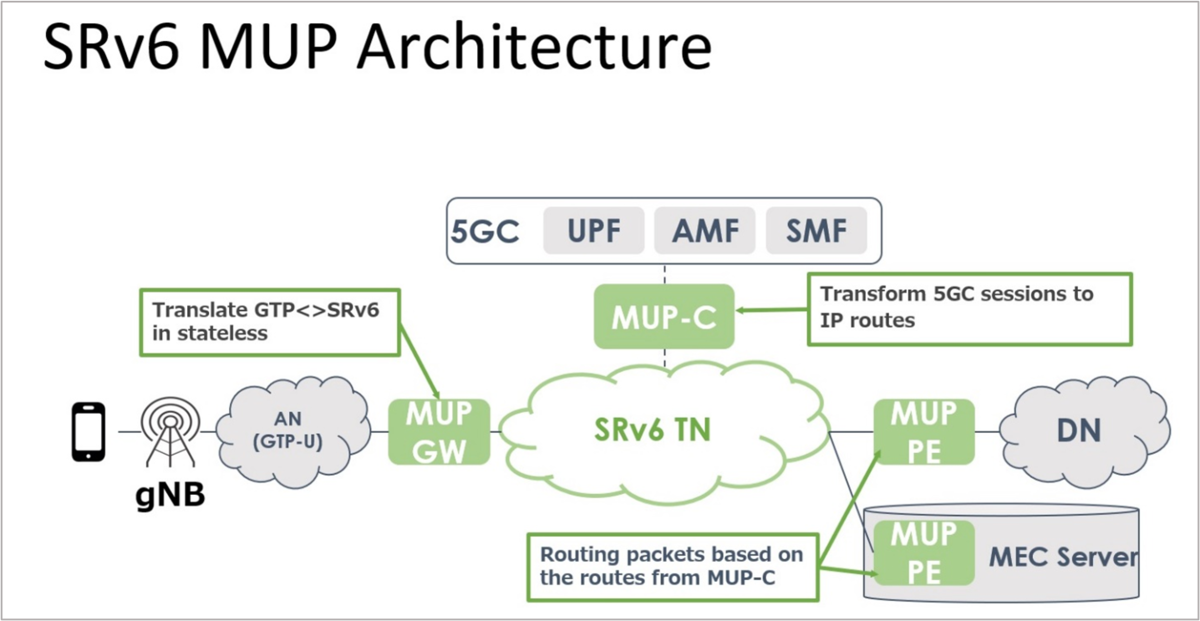 SR stands for segment routing, a data-routing technique that simplifies the management of sending packets of data across communication networks. When segment routing is combined with an Internet address scheme called Internet Protocol version 6, we get SRv6. SRv6 enables a network to encode network instructions and insert them into the headers of the IPv6 data packet addresses. The instructions control the packet processing and inform the network of efficient routes for the packets to follow to their destination. Lastly, we have MUP, the Mobile User Plane architecture that makes it possible to apply and use SRv6 technology in mobile networks.

And those are by no means the only benefits. “SRv6 MUP facilitates the easy deployment of MEC, as well as cutting deployment costs,” says Dr. Ashiq Khan, a SoftBank Corp. Senior Director overseeing Cloud Infrastructure R&D.

This increased flexibility and efficiency contrasts starkly with the present method of communication used in conventional 5G mobile networks. Today, when a person uses a device such as a smartphone, a signal is first sent to a wireless base station, which then tells the 5G core—the central part of the network responsible for its critical functions like mobility management—to create a tunnel or data network path from the base station near the sender to the central core. Only then can the data transfer take place via a second tunnel to the receiver. All data has to go to the central core first, before being forwarded to their destination. This complexity creates a significant challenge for deploying MEC, where data to and from a sender/receiver needs to go directly to a MEC location and back.

Compare that clunky method to the Internet way of doing things. An email, for instance, is sent from a computer and is forwarded by a network of routers with its destination address (IP address) of the receiver already attached. The routers already know what the ideal route is to forward the data automatically to a router near the receiver. This last router in the journey shunts the data to the receiver’s terminal, which reconstitutes the packets into the email.

Now, with SoftBank’s development of SRv6 MUP, mobile networks too will be able to take advantage of this efficient Internet-based way of communicating. After some refinement, SoftBank plans to implement the technology in its own network shortly. Doing so will eliminate the need for equipment for a network’s mobile core functions, for example, a User Plane Function (UPF), to set up tunnels between senders and receivers.

“Such equipment has to be specially designed and is very expensive,” says Khan. “Whereas SRv6-enabled mobile networks can make use of commercial IP routers. This will cut costs significantly, while also providing smooth connectivity to new applications like MEC.”

Writing about the demonstration, Ed Doe, vice president and general manager of the Switch and Fabric Group at Intel, said, “The MWC PoC demo shows how SoftBank’s SRv6 MUP network design can be used to inject IP routing into a 5G network to add the flexibility, efficiency, and throughput to enhance large scale distributed functionality using SRv6.”

Cisco Systems, which supported SoftBank’s earlier world-first commercialization of SRv6, also commented on the PoC demonstration. Clarence Filsfils, a Cisco Fellow, said, “We are excited to work with SoftBank for SRv6 MUP. The cost-efficiency, flexibility and the simplicity of SRv6 network programming will surely help to simplify the mobile architecture toward beyond 5G and will give network operators a greater freedom of choice for their mobile network systems.”

A video of SoftBank’s SRv6 MUP technology can be seen here.