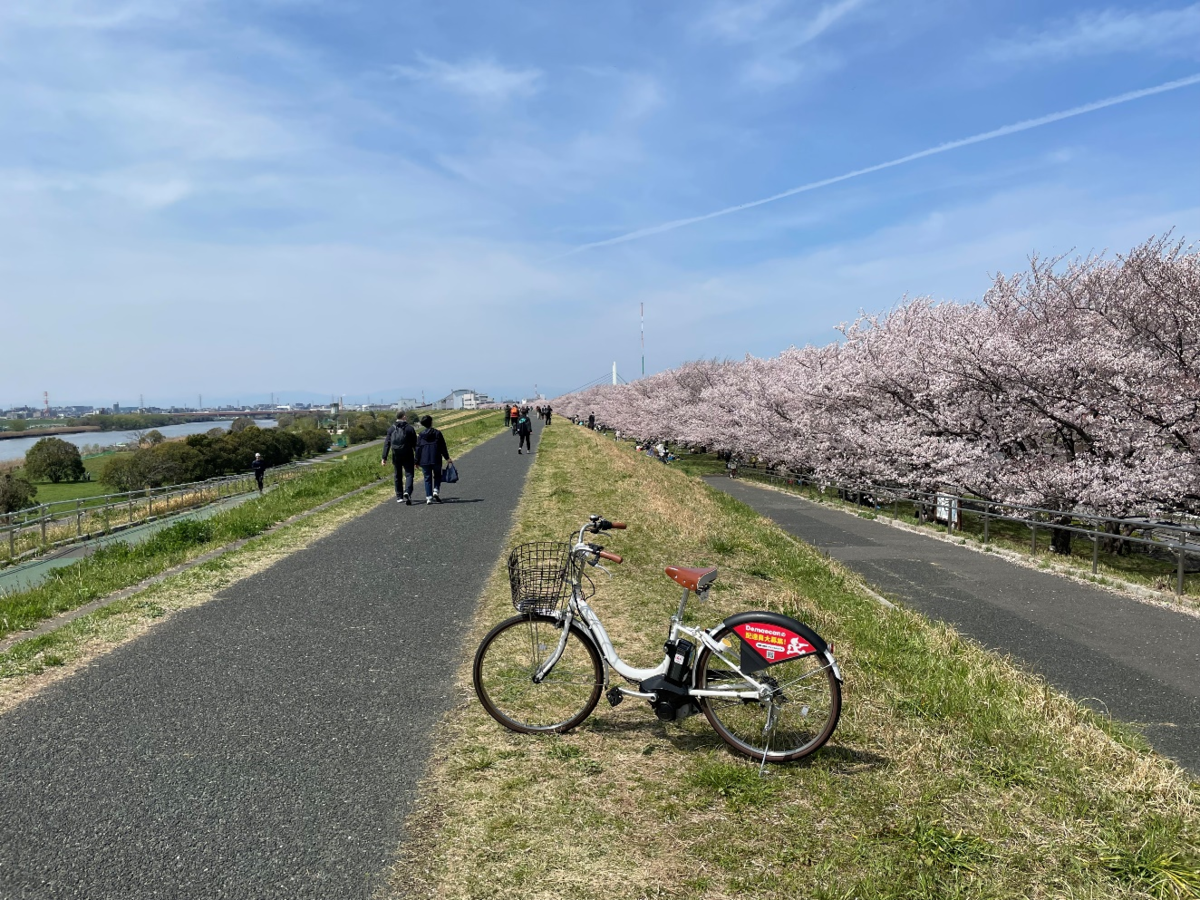 An extensive and efficient network of trains and buses often comes to mind when Japan’s transportation infrastructure is mentioned. To avoid crowded trains and get to locations between stations and bus stops, however, bike-sharing is gaining traction as a new and convenient mode of public transportation. OpenStreet Co., Ltd., a SoftBank Corp. (TOKYO: 9434) group company, is a leader in this space with its smartphone app-based “HELLO CYCLING” bike-sharing platform. As of April 1, 2022, OpenStreet had approximately 4,700 stations bike-sharing stations located across Japan, from Iwate Prefecture in the north to Okinawa Prefecture in the furthermost southwest.

With its growing presence, HELLO CYCLING is a becoming a convenient option for those on the move, whether they need wheels for daily errands, sightseeing or commuting. To get going, customers just need to download the HELLO CYCLING app and create an account at no charge. A user can then reserve an electrically-assisted bicycle at a nearby HELLO CYCLING station—often located near train stations or convenience stores—and drop it off at any participating station.

Various municipalities around Japan are adopting the HELLO CYCLING platform as way to complement their existing public transportation systems and promote tourism. One such municipality is Saitama Prefecture’s Toda City, a community separated from the north of Tokyo by the Arakawa River. 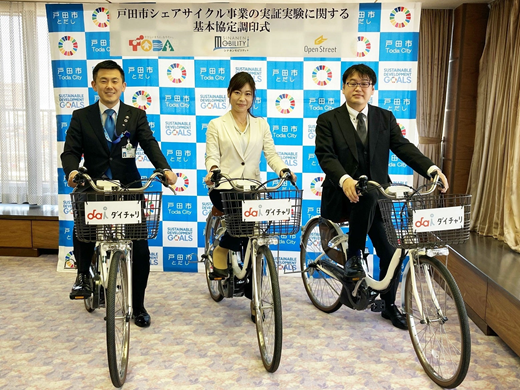 On March 9, 2022, OpenStreet, Toda City, Sinanen Mobility+ Co., Ltd.—an OpenStreet partner that operates the “DAICHARI” bike-sharing service—signed an agreement to conduct bike-sharing trials in the city. In addition to Toda City’s existing HELLO CYCLING bike-sharing stations, 19 new stations are being installed around train stations, parks and other locations. Using data obtained from the trial, Toda City will study the effectiveness of bike-sharing as an urban transportation mode that complements public transportation infrastructure. The City will also consider how bike-sharing can contribute to community revitalization and tourism.

To get a closer look and experience the service first-hand, SoftBank News took a HELLO CYCLING bicycle for a spin through Toda City.

Bikes are easy to find and reserve

Reserving a bicycle with the HELLO CYCLING app was easy, especially since it supports English language menus. Just east of Nishikawaguchi station in Kawaguchi City in Saitama Prefecture, the app displayed available bicycles near a convenience store. The bike numbered B5342 was reserved. 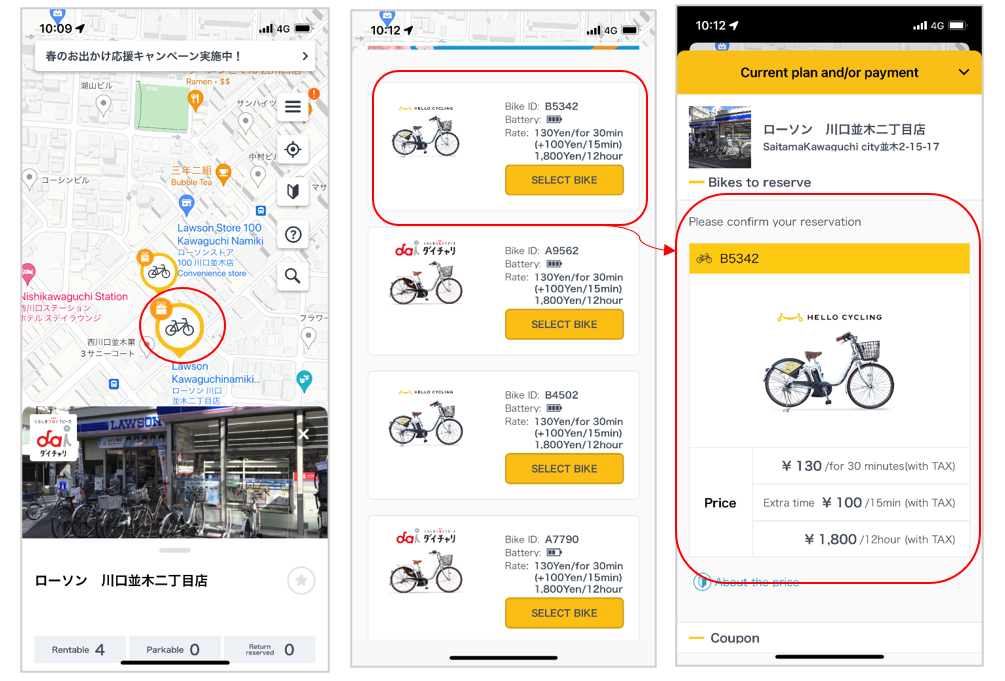 To reserve a bicycle, open the app to locate a station on a map and choose a bicycle

To confirm a reservation, a payment method needs to be selected. After a reservation is made, a customer has 30 minutes to unlock the bicycle (times allowances may differ according to region). If there’s a problem, such as a flat tire, the bicycle can be returned at no cost within three minutes after renting starts. 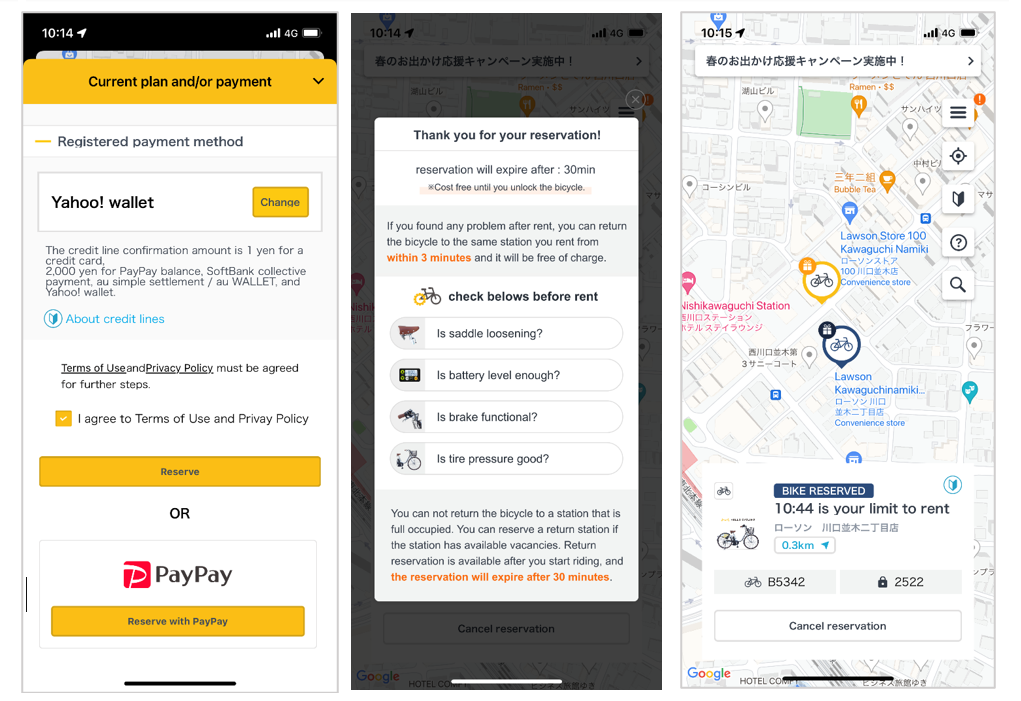 A bicycle can be reserved after a payment method is selected

By inputting a PIN code that is shown in the app on a terminal on the handlebars, the bicycle will unlock. (Alternatively, a pre-registered IC card can also be used to unlock the bicycle). 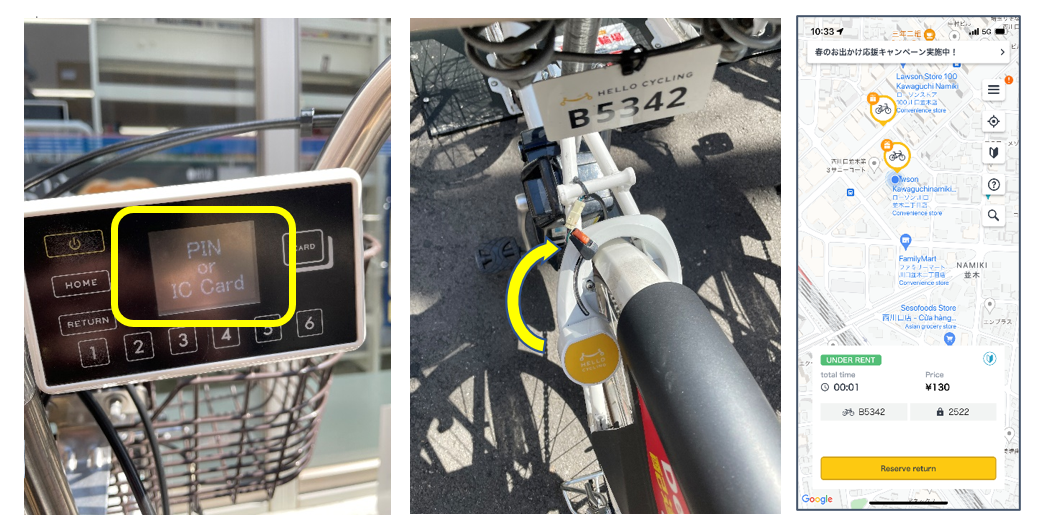 Input the PIN in the app or swipe an IC card, and the bicycle is ready to ride!

Cycling to see a new side of the city 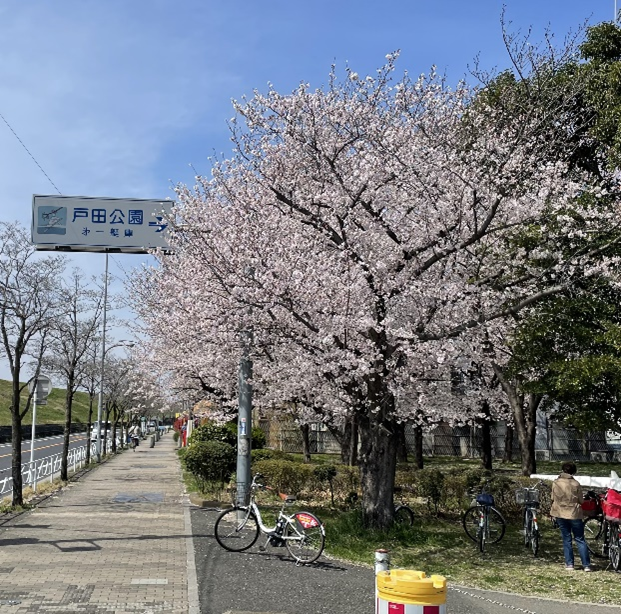 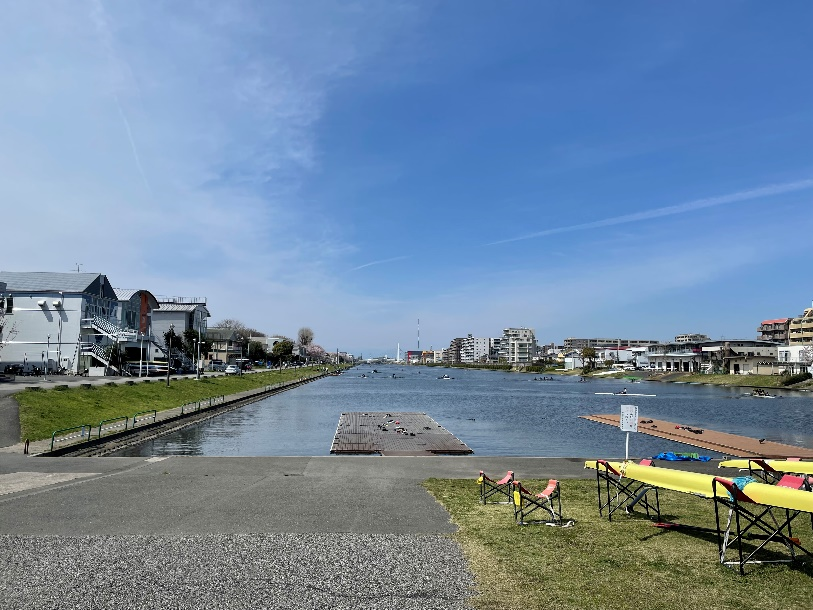 From Kawaguchi City, we traveled south to Toda Park, which lies on the northern bank of the Arakawa River. The park served as a venue for rowing events during the 1964 Tokyo Olympics and continues to be used for rowing and boating. 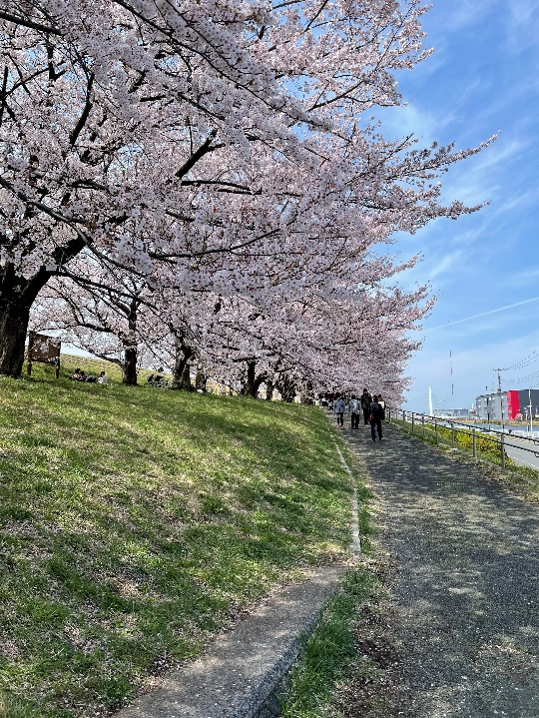 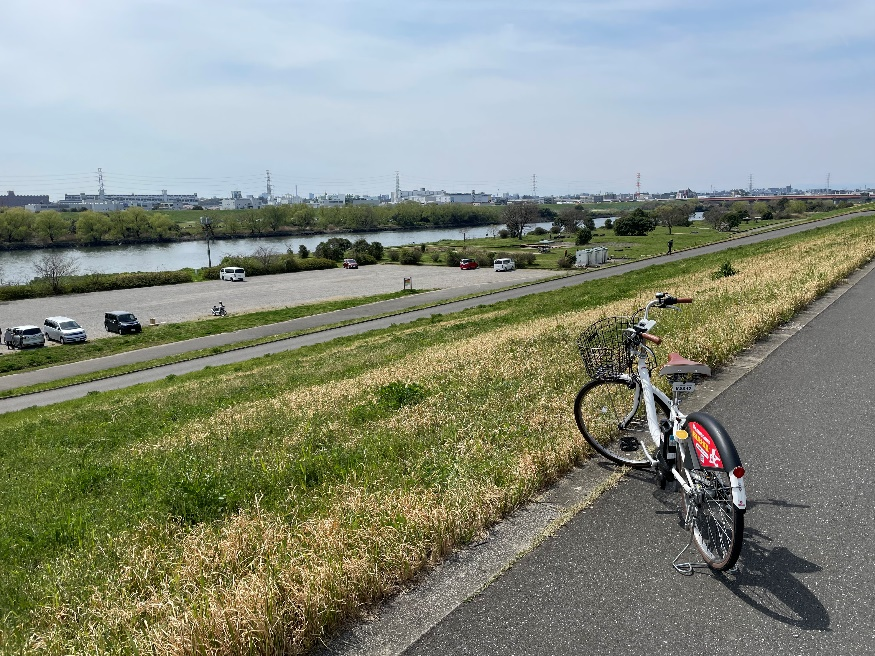 From there, we biked along the Arakawa River, which is especially scenic during cherry blossom season. There are long paths along the river that are great for extended cycling tours, and no red lights! 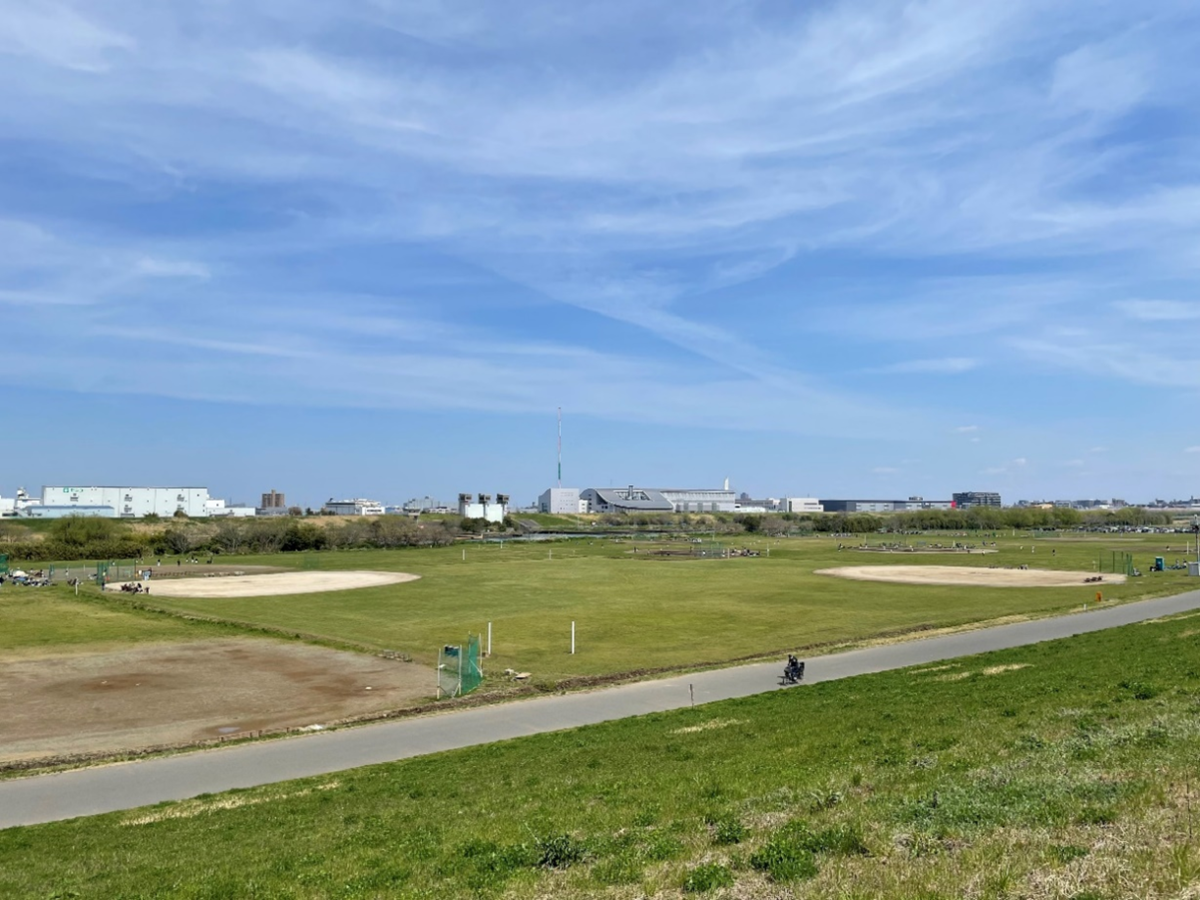 From there we crossed the Arakawa River on the Sasame Bridge to enter the northwestern tip of Tokyo. The other side of the river, which has numerous baseball and soccer fields, is also great for bicycling. 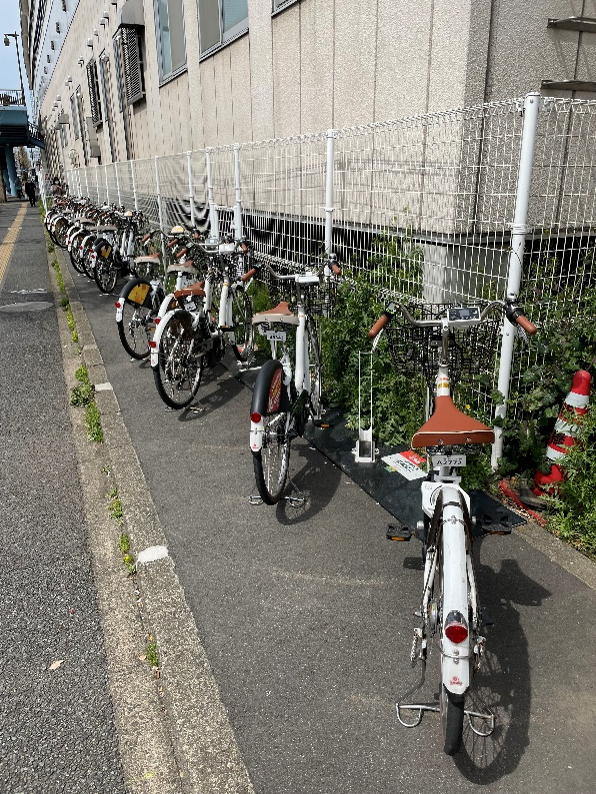 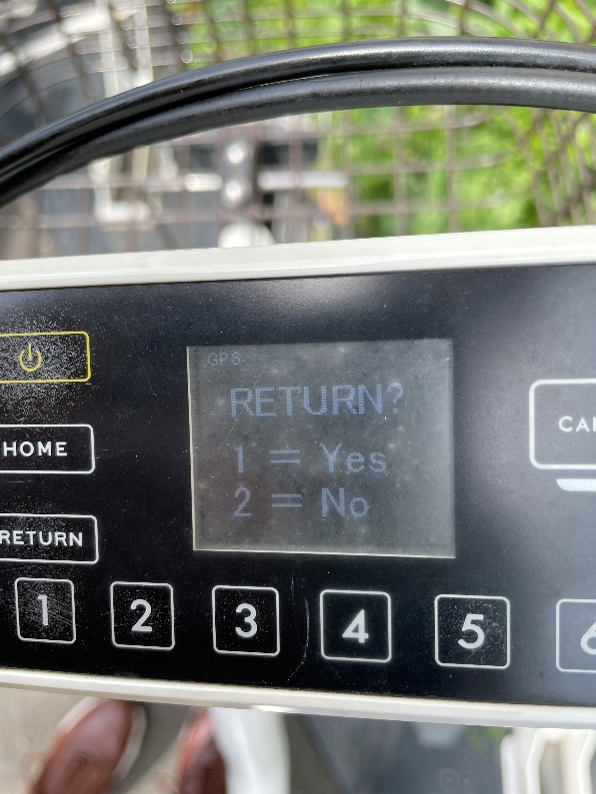 To wind up our journey, we arrived at Takashimadaira Station on the Toei Mita subway line. Along the station, we found an empty HELLO CYCLING parking space to return the bicycle.

Returning the bike was easy. After locking it, we pressed the “RETURN” button on the handlebar terminal. 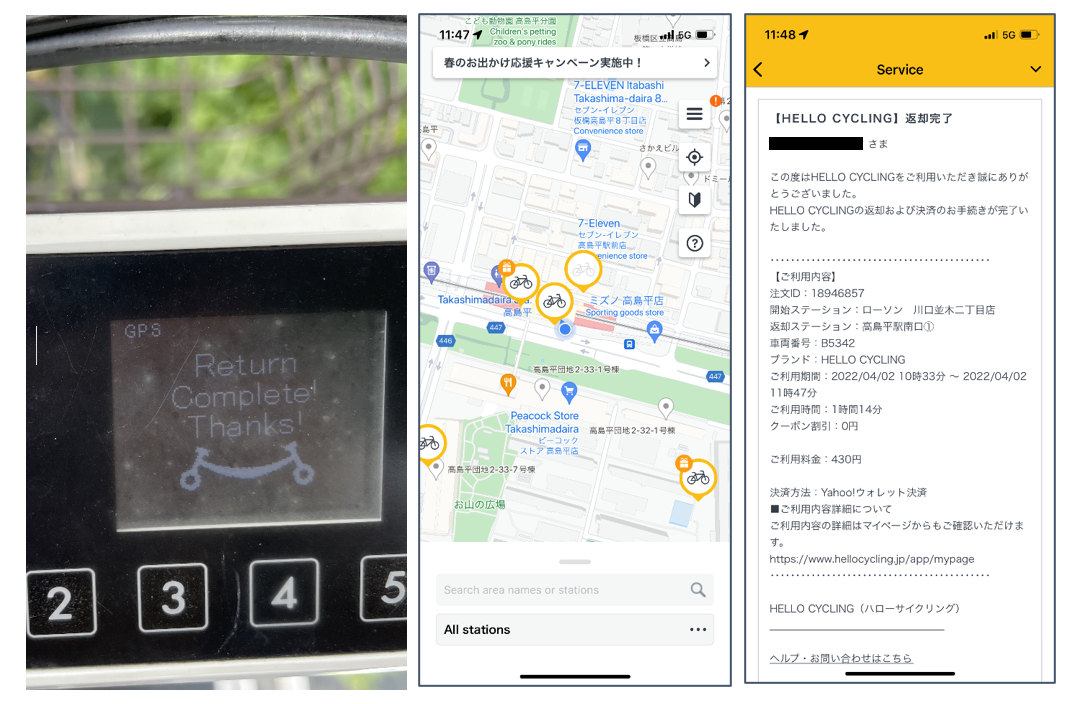 How much did the ride cost? At 1 hour and 14 minutes, the journey came to 430 yen. In this particular area of Saitama and Tokyo, the first 30 minutes cost 130 yen, and there was a surcharge of 100 yen for each additional 15 minutes.

If you’re in Japan, and you’d like a transportation alternative that allows you to enjoy the scenery and breathe some fresh air, give HELLO CYCLING a try!