SoftBank Corp. (TOKYO: 9434) held its 36th Annual General Meeting of Shareholders (AGM) on June 23, 2022, at Tokyo Portcity Takeshiba. President & CEO Junichi Miyakawa chaired the meeting, which was attended by approximately 50 shareholders at the venue and by about 350 shareholders who participated online. After reporting on SoftBank’s business progress and financials and answering shareholder questions, all three AGM proposals—a partial amendment to the Articles of Incorporation, the election of thirteen Board Directors, and the election of one Audit & Supervisory Board Member—were approved. 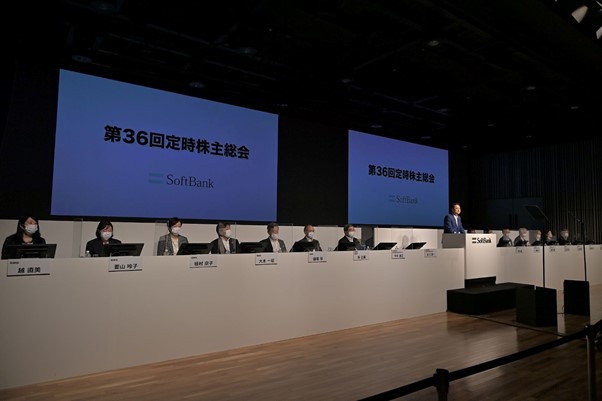 For the first time in 3 years, SoftBank Corp. Directors attended the AGM on site

Miyakawa elaborated on the first theme by noting that SoftBank, building on its foundation as a telecommunications carrier, is becoming a provider of next-generation infrastructure. To illustrate, he unveiled a new advanced technology initiative to implement autonomous driving services in Japan. In collaboration with US-based May Mobility, Inc., a leader in autonomous vehicle technology, SoftBank will conduct autonomous vehicle trials around the Takeshiba district of Tokyo later this year to prepare for practical implementation in Japan.

Miyakawa cautioned that many challenges must be overcome before autonomous vehicle services are implemented, however. “In addition to improving AI capabilities, which serve as the brains of the cars, it will be necessary to create highly accurate digital maps. This is where our ‘Digital Twin’ technology will come in,” he said.

Shareholders submitted questions in advance, and a total of 24 questions were answered at the AGM. In response to a question asking if SoftBank would extend its business reach to autonomous delivery trucks, Miyakawa replied in the affirmative. “Since we’re always working on the platform side to implement advanced technologies into society, we’d like to create a harmonized environment that enables accident-free autonomous truck deliveries for different vehicle manufacturers,” he said.

Asked if SoftBank will increase its dividend payout of 86 yen per share, Miyakawa said that he would like to maintain the high return ratio. “We’ll announce our medium- to long-term plan in May next year, and in line with our ambition to grow as much as possible, we’ll return profits to shareholders accordingly,” he said.

A video, resolution materials and more information on SoftBank’s 36th AGM can be found here.