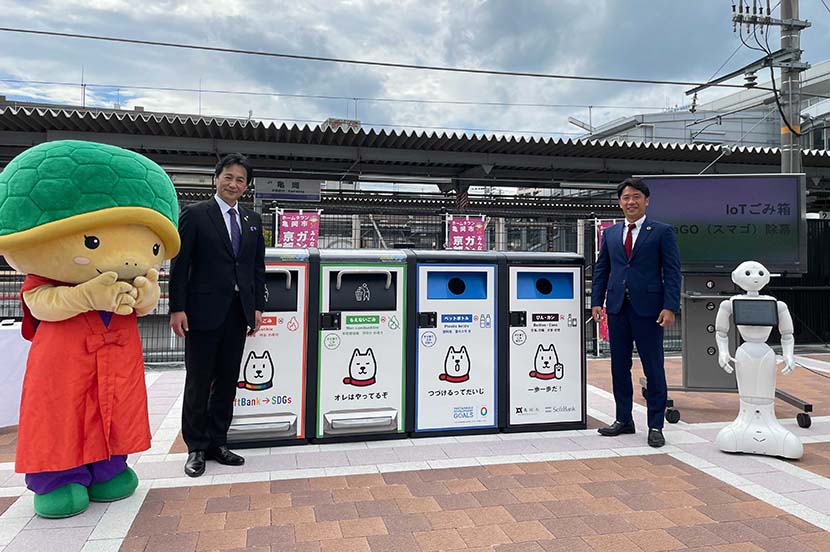 Kameoka City, located in Japan’s Kyoto Prefecture and about 20 minutes away from Kyoto Station by rapid train, is a municipality rich in history and natural beauty. The City is also a pioneer in safeguarding the environment. In 2012, it was Japan’s first inland municipal government to hold the “Marine Litter Summit,” where a plan to clean up the Hozu River and prevent waste from flowing into the ocean was announced. In 2018, the City signed the “Kameoka Zero Plastic Waste Declaration,” and in 2019 it signed an “Environment and Education Program Collaboration Agreement” with SoftBank Corp. (TOKYO: 9434), which brought the humanoid robot Pepper to elementary schools to raise pollution awareness. The City was also selected as a "SDGs Future City" and "SDGs Model Project" by the Government of Japan’s Cabinet Office.

On October 3, 2022, Kameoka City unveiled a new initiative that harnesses technology to eliminate litter. In cooperation with SoftBank, Kameoka City implemented a solution that uses IoT sensors to compress garbage in outdoor trash cans and remotely track how much litter has been accumulated.

Aiming to create an environment that discourages littering

In April 2022, Kameoka City launched its "Zero Litter Project" to further improve its civic environment. As part of the initiative, the City decided to install IoT-powered smart recycling boxes called "SmaGO" provided by Japan-based company Forcetec, marking a first for the Kansai region. The SmaGO product name combines the English word “smart” and the Japanese word for litter (“gomi”). 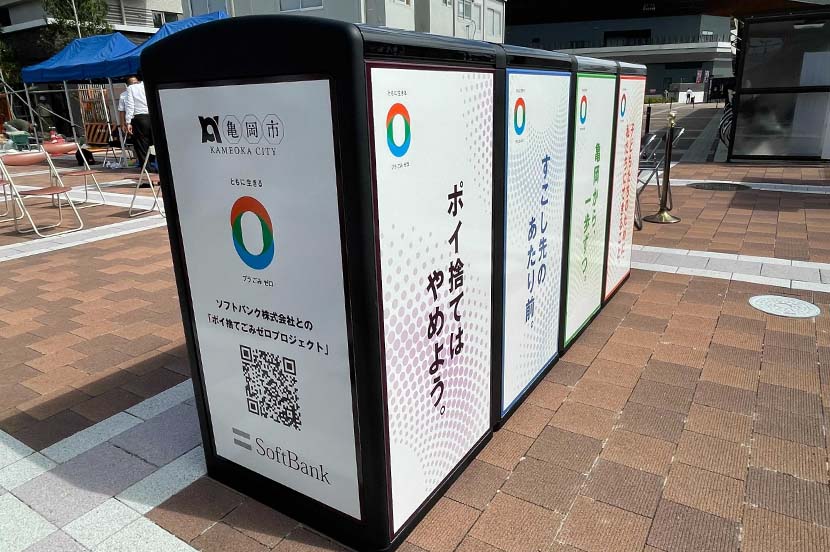 Powered by solar energy, SmaGO uses electricity generated on-site to compress trash, making it possible to increase trash can capacity by approximately 5 to 6 times compared to conventional trash cans of the same size. In addition, IoT sensors monitor the amount of trash accumulated and send notifications when it’s a good time to collect the trash. This significantly reduces the frequency and cost of garbage collection trips, and it also reduces CO2 emissions associated with the collection process. Since the system is equipped with solar panels, external power sources are not required, meaning no additional burden is placed on the electrical grid. After analyzing garbage collection data with the current installation, Kameoka City will consider further expansion of the SmaGo system.

At a ceremony held in Kameoka on October 3, 2022, to commemorate the launch of the IoT-powered trash can installation, Kameoka City Mayor Takahiro Katsuragawa and Masato Ikeda, Head of SoftBank’s CSR Division, both shared their thoughts. 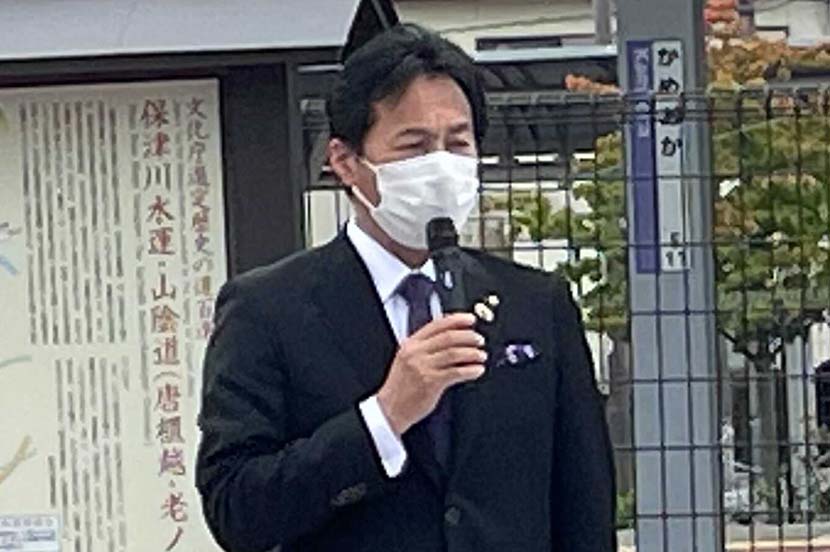 Mayor Katsuragawa said, "It’s been three years since we first partnered with SoftBank. Today, with their cooperation, we were able to install a new IoT trash can installation at the north exit of JR Kameoka Station. In the future, we’ll promote proper litter management by monitoring the status of garbage posting data, and we’ll also consider adding more trash cans. We strongly encourage our citizens to make use of these IoT trash cans.”

Masato Ikeda of SoftBank said, "Since we signed our agreement, we’ve met with Kameoka City once or twice a year to check on the progress of our projects, identify issues, and share ideas with the Mayor. We’d like to analyze more data from the IoT trash cans we’ve installed and consider what steps we should take in the future to make Kameoka City even cleaner. We believe it is crucial to have the cooperation of citizens, and we would like to promote the future development of Kameoka City's environmental initiatives by not only asking citizens to pick up litter, but also to post information on where litter has been found by using LINE and to check the status of IoT trash can usage. In consultation with the people of Kameoka, we’d like to further assist Kameoka City’s environmental initiatives.” 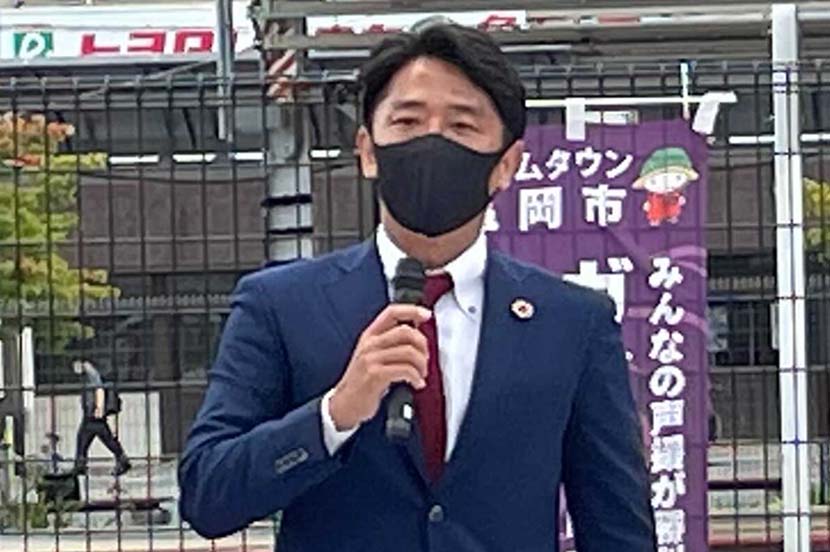 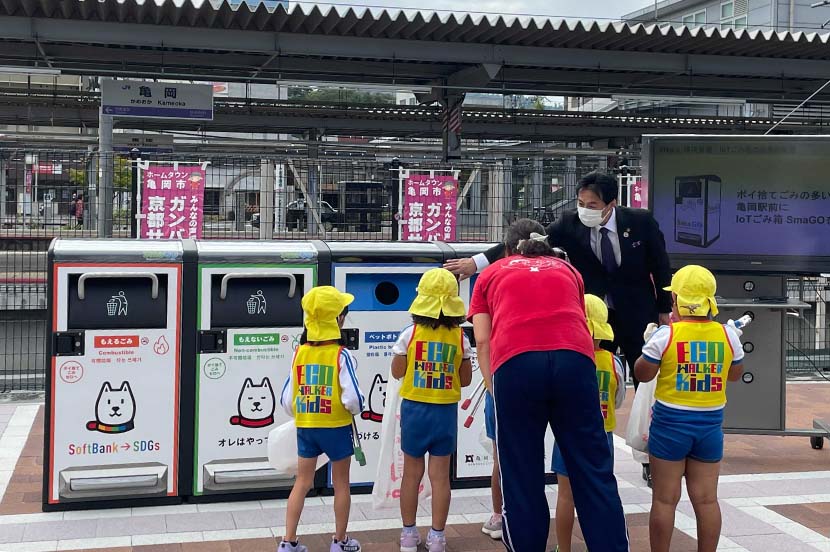 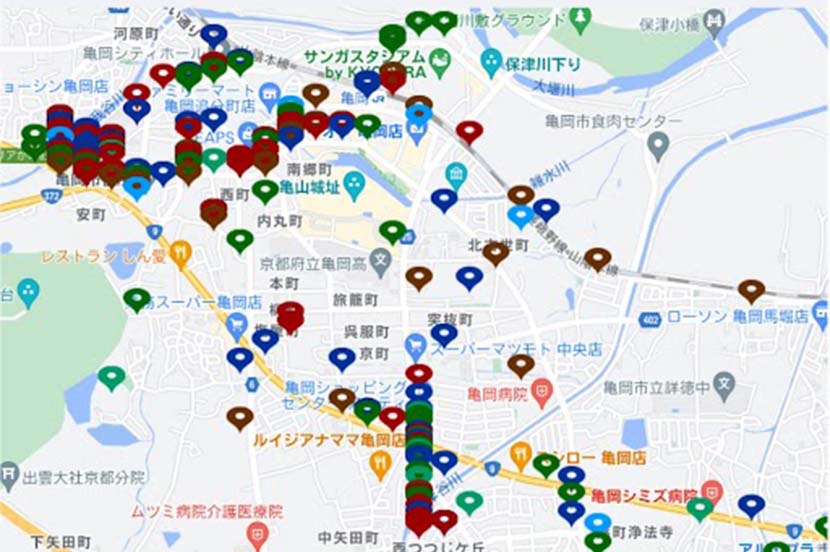 The SmaGO trash can locations were determined based on location-based data of litter submitted by residents using the "Litter Posting Menu." Launched in April 2022 as part of Kameoka City’s Zero Litter Project, the initiative utilizes the LINE messaging app so residents can easily post pictures of litter found around the City. These locations are then displayed on a map to visualize the litter situation.

By gathering information useful for analyzing the causes of why and where littering takes place, data-driven efforts are expected to help Kameoka City solve the problem of littering. 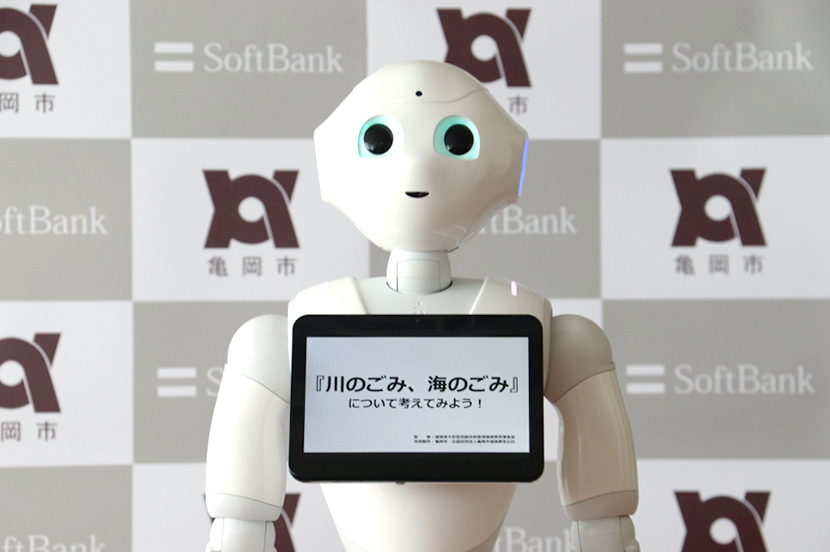