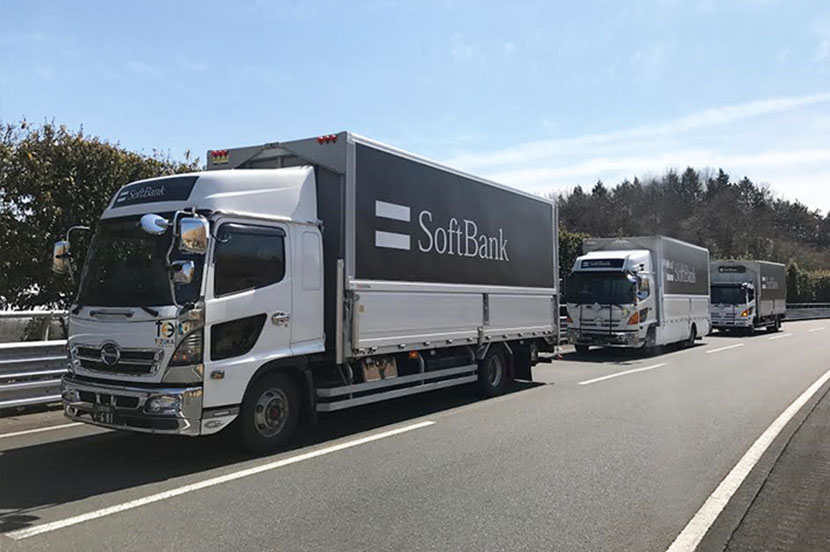 5G is expected to redefine industries with its ultra-fast speeds, high capacity, low latency and massive device connectivity. The transportation and logistics sector, which is expected to utilize autonomous driving in the future, is likely to benefit from 5G as well. In June 2019, SoftBank Corp. (TOKYO: 9434) announced that it had conducted a truck platooning trial using 5G technology on the Shin-Tomei Expressway. The trial using 5G technology was the first in the world* to succeed in Cooperative Adaptive Cruise Control (CACC), where the inter-vehicle distance is automatically controlled.

This article takes an in-depth look at the trial and how 5G technologies are being utilized to evolve truck platooning.

In Japan, the labor force is rapidly shrinking due to a declining birthrate and aging population, and the age composition of truck drivers is skewing upward. This is causing a shortage of drivers, which has serious societal ramifications. Truck platooning—the practice of electrically linking two or more trucks that follow one another closely—is now garnering attention as a possible solution. When governments approve the utilization of automated driving, the lead truck will be a human-piloted vehicle and the trailing trucks in the platoon will be possibly automated; more specifically, trailing trucks will be unmanned through the utilization of autonomous vehicle technologies. This type of trucking formation would allow for large amounts of freight to be delivered with just a small number of drivers.

Truck platooning is also expected to yield other various benefits. If a platoon travels with a shorter inter-vehicle distance conducted by the lead vehicle, the air resistance affecting each trailing vehicle is reduced and the vehicle speeds become more stable with less fluctuation, resulting in better fuel efficiency compared to traditional formations of individual trucks*. Furthermore, it is expected that the stable inter-vehicle distances will mitigate traffic congestion and improve working conditions for drivers. Flexibility could also possibly be built into the system in the future, enabling situations where individual trucks travel independently in the event the formation is broken up.

Truck platooning is a next-generation technology that can address driver shortage issues while reducing logistics costs and increasing efficiencies. 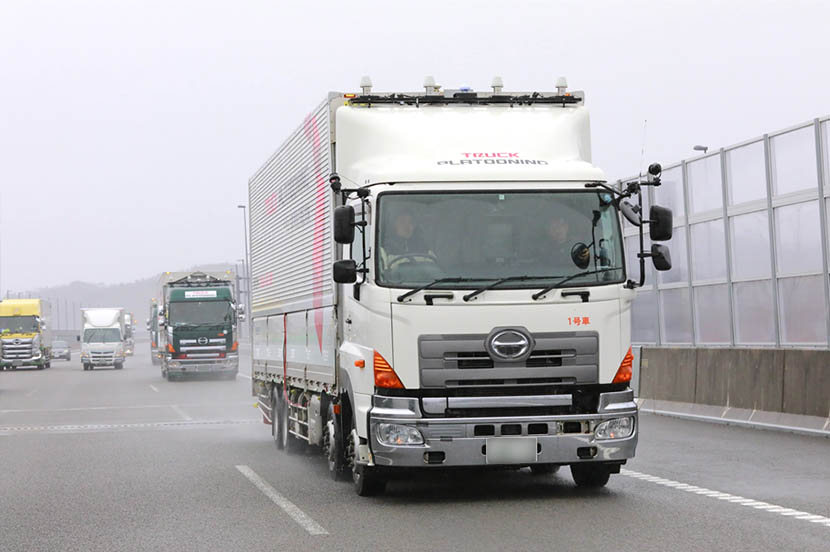 5G – A key to the evolution of truck platooning

To form and maintain a stable truck platoon where the vehicles cooperatively cruise, in addition to using autonomous driving technologies, the platooning trucks need the capability to communicate with each other and the trailing trucks need to be able to maneuver instantaneously.

Normally, when a vehicle decelerates, drivers of the following vehicles recognize the deceleration and brake to slow down. In platooning, however, when the lead vehicle decelerates, it is required that the braking information be instantly transmitted to the trailing vehicles in order to enable much faster deceleration than capable by human-driver reactions. To achieve the required real-time communication between vehicles, low-latency communication—a key feature of 5G—is essential.

5G use cases for truck platooning

As part of the 5G Integrated Verification Trials in 2018 led by the Ministry of Internal Affairs and Communications of Japan (MIC), SoftBank was contracted to conduct trials for truck platooning on a public highway and for utilizing the remote surveillance and the remote operation of the vehicles. This work was partially sponsored by MIC, under the grant “Research and examination on technical requirements and others in 5G mobile communication system for realizing low-latency communication of over-the-air 1ms and end-to-end 10ms.” SoftBank’s trials are expected to be used in two use cases.

Use case 1: Vehicle control for trailing vehicles and video surveillance of vehicle surroundings

Use case 2: Remote surveillance and remote operation of vehicles

What kind of data is being exchanged between trucks while traveling?

The data can be categorized roughly into two types. The first includes vehicle position and acceleration/deceleration information, braking information, steering information and other vehicle control system-related communications. Whenever a vehicle operates the steering wheel or brakes, a small amount of data in the tens to hundreds of bytes is transmitted to the other vehicles. 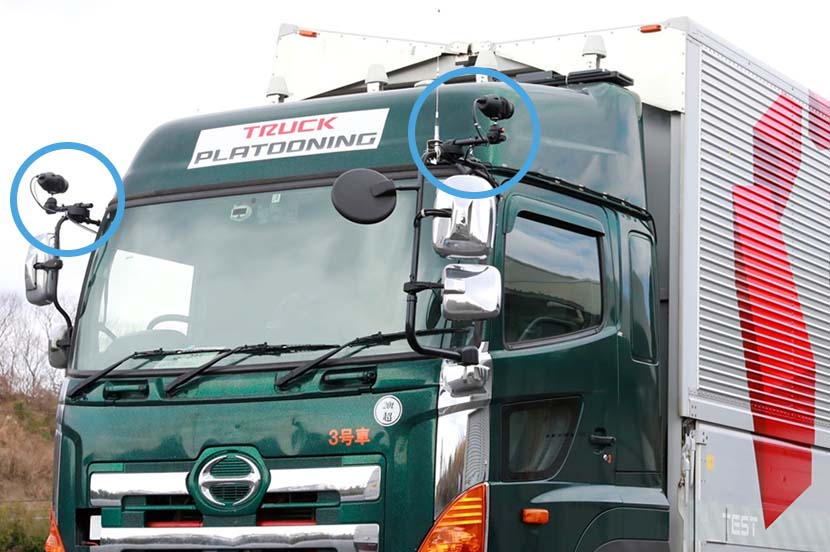 Meanwhile, V2N2V and V2V can be used in conjunction as complementary communication methods.

If the V2N2V communications are interrupted for any reason, control of the trailing vehicles could be lost, resulting in their hitting the lead vehicle. To prevent this situation, vehicle control messages are directly sent by V2V to the trailing vehicles, ensuring that they can be safely stopped if necessary.

Furthermore, if there is an emergency-type event with the driver of the lead vehicle, an emergency stop message is sent from the remote monitoring and operation center to the trucks. To prepare for this situation and to ensure safe transport operations, use cases using V2N communications have been verified as well. 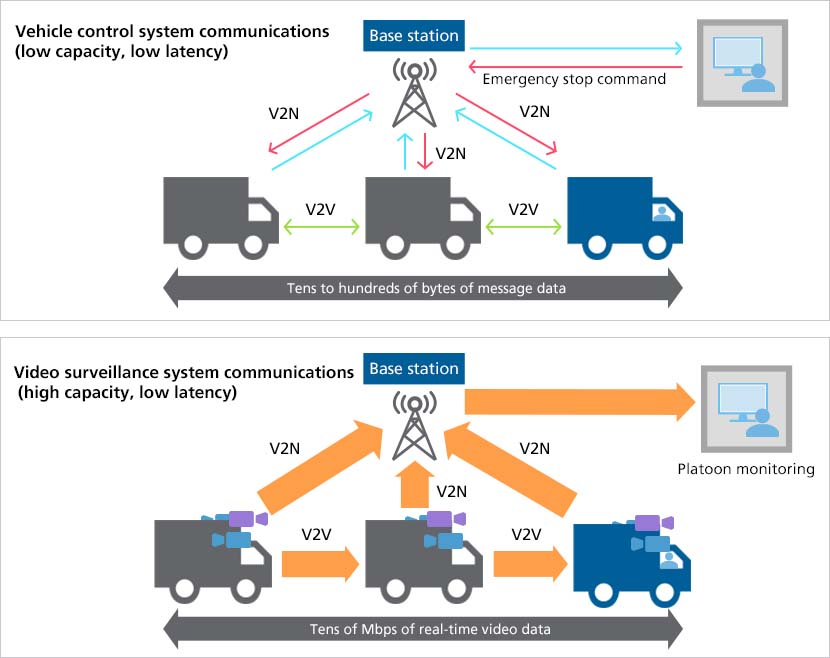 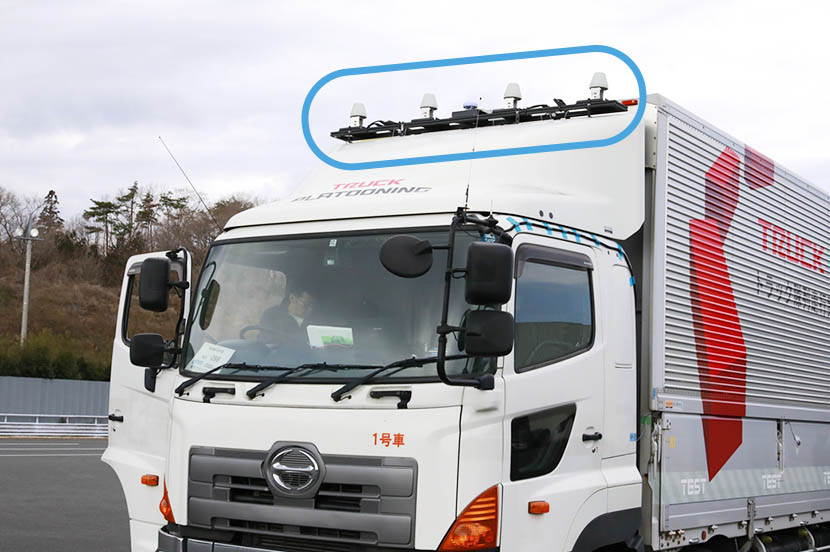 In field tests for the 5G-NR experimental prototype conducted in 2019, ultra-low-latency communications with an over-the-air transmission delay of less than 1 millisecond were achieved for both communications via base station (DL and UL) and direct communication between vehicles (FL and BL) in a world first*.

During platooning, trucks communicate wirelessly with each other while traveling. As communications are occurring while the trucks are in motion, the relative positions of the transmit antennas and receiver antennas mounted on the trucks may vary by the moment.

Particularly when using very high frequencies, such as the 28 GHz band, there were issues with the antenna technology that needed to be solved, unlike conditions with the 4.5 GHz band. 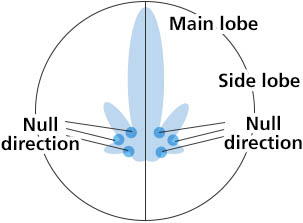 Generally, antennas used in high frequency bands with large propagation loss, such as those used for the 28 GHz band, have directivity to transmit and receive radio waves more strongly in the intended direction. However, antennas with such directivity have some directions where signal transmission and reception strength levels decrease significantly. These directions are referred to as "null direction." It is easy to imagine this when considering that there are some instances where the reception strength of a wireless signal suddenly weakens, for example. 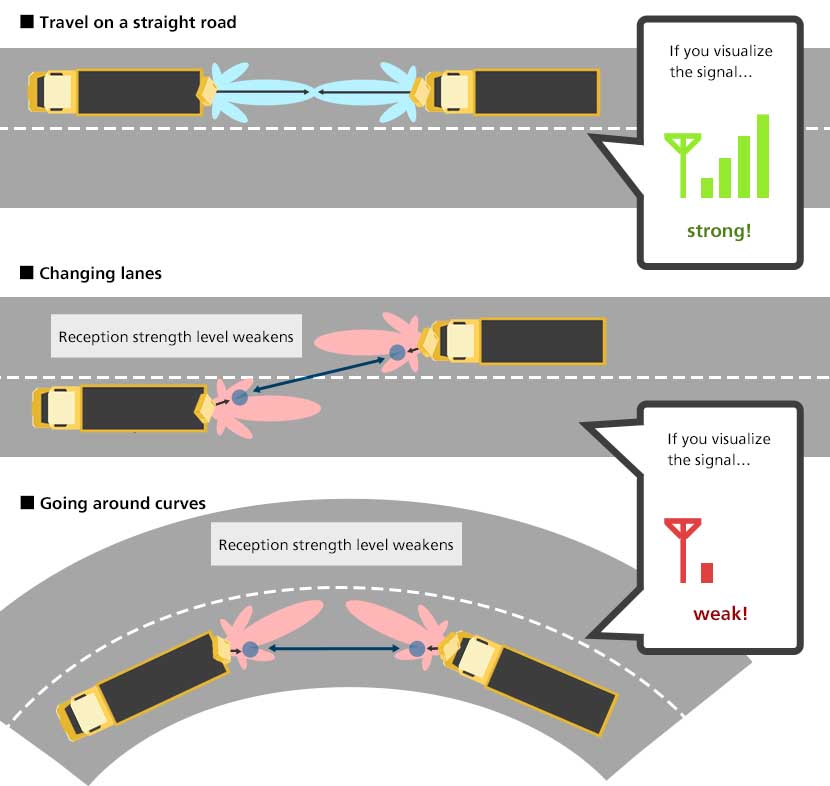 Even if stable communication is possible when a platoon is traveling on a straight road in the same lane while maintaining a target inter-vehicle distance and speed, the relative position of antennas attached to the trucks will change when turning or switching lanes. The vehicles in the platoon may communicate with each other over null directions at certain times depending on their relative antenna positions, and this could result in significantly weakened reception strength levels, interrupting communications. If communication is lost between the trucks, there is a high possibility that the trucks will be unable to cruise cooperatively, which could result in an accident.

In order to avoid or mitigate the influence of the null directions, digital beamforming techniques were successfully tested in FY 2017 (the fiscal year ended March 2018). However, in the case of implementing digital beamforming techniques on actual vehicle devices, there were practical issues such as device power consumption, their size and costs. So in FY 2018 (the fiscal year ended March 2019) SoftBank individually developed antennas that utilize null-fill antenna techniques, which help to prevent variance in the received strength levels of radio waves depending on the direction of the antennas, as a simpler and lower-cost technology. SoftBank confirmed experimentally that stable communication quality can be maintained with this technology, even when data is transmitted and received while going around curves or changing lanes. 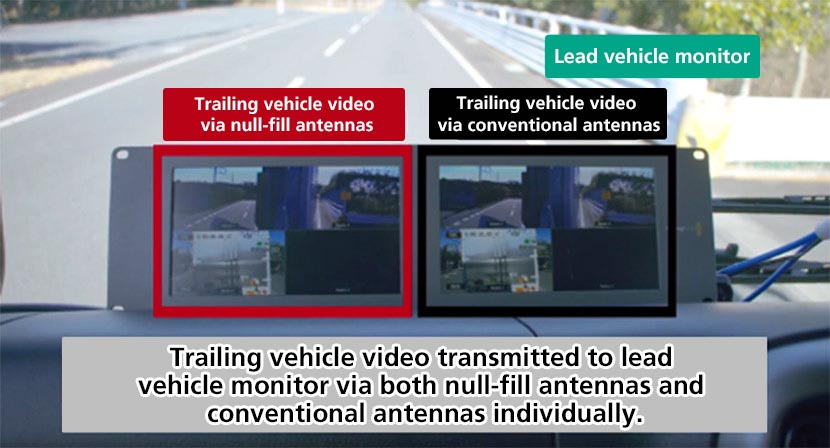 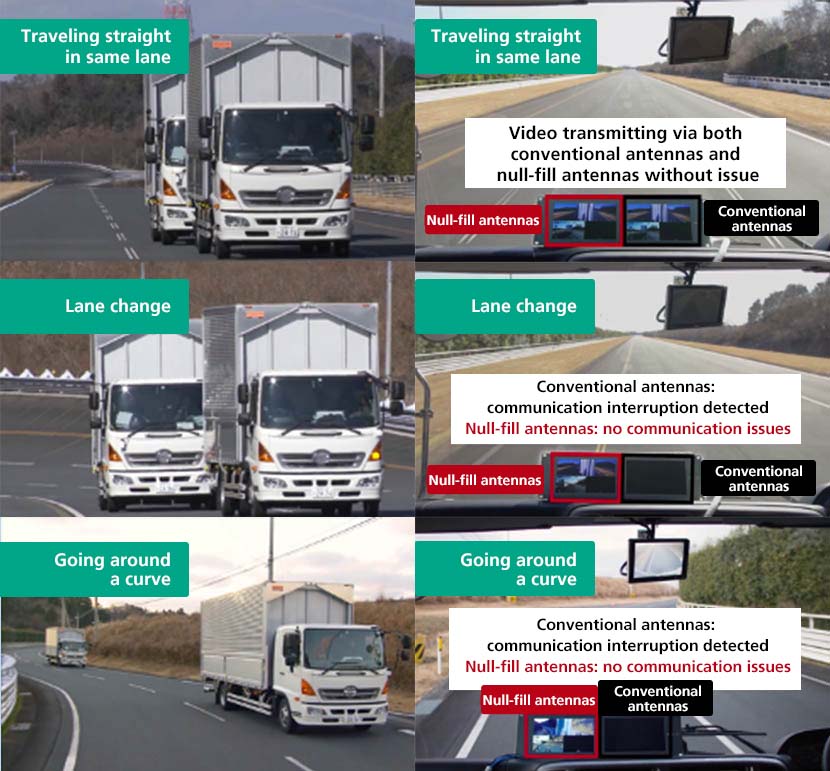 Efforts toward the practical use of autonomous truck platooning

So far, trials have been conducted on an automotive test course at the Japan Automobile Research Institute (JARI) Shirosato Test Center (STC) and on the Shin-Tomei Expressway in Japan.

A video transmission trial for trailing vehicle surveillance was conducted on the test course, which is used by automotive companies for vehicle performance evaluation trials in Japan. It was confirmed that real-time video transmission with lower latency compared to that of 4G/LTE is possible.

Additionally, to address the antenna implementation issues, under conditions where signal transmission and reception strength levels weakened while making lane changes and driving around curves—which causes issues related to points of the transmit antennas and receiver antennas—the effects of utilizing antennas with null-fill techniques were verified through the video transmission trial. The trial results confirmed that the null-fill antennas can prevent communication interruptions when going around curves and changing lanes, although the conventional antennas are prone to communication interruptions when changing lanes.

In February 2019, transmission of inter-vehicle control messages was demonstrated using 5G-NR sidelink (using the 4.5 GHz band). In a trial on the Shin-Tomei Expressway, it was confirmed that 5G-NR sidelink could shorten end-to-end arrival times by about 50 milliseconds compared to 4G/LTE. 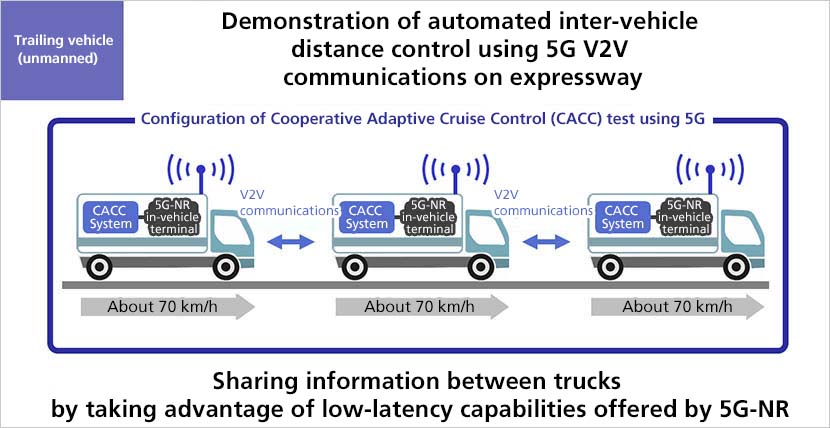 Also in February 2019, a truck platoon based on CACC using 5G-NR sidelink was demonstrated on a trial course of about 14km in length at a public expressway, under a practical test environment with the condition of mixing with various other vehicles.

Via 5G V2V communications (on the 4.5GHz band with an over-the-air latency of less than 1 millisecond) among three trucks traveling at the target speed of 70 km/h on the test area of the Shin-Tomei Expressway, the platoon shared information on locations, speeds and other aspects and successfully maintained formation using CACC.

Platooning technology continues to evolve with trial accumulation. Autonomous driving research and development will continue in 2020 with the aim of realizing successful unmanned vehicle platooning on expressways.

This article has been adapted from the original Japanese article. Certain passages have been abbreviated, expanded and updated.