More than most countries, Japan urgently needs to introduce autonomous driving vehicles ASAP. Beset by a falling birth rate and an aging population declining in numbers yearly, the country’s workforce too is shrinking. One government agency is forecasting 12 million fewer workers by 2040. In the hard-hit transport industry, for instance, Japan’s Railway Freight Association expects a shortage of 280,000 truck drivers in 2028. Meanwhile, the bus industry, barely profitable even before the COVID-19 pandemic, is suffering from a chronic shortage of drivers.

Yet as the central government and enterprises struggles to cope with the fallout stemming from these challenging demographics, BOLDLY Inc., an autonomous driving systems development and service subsidiary of SoftBank Corp. (TOKYO: 9434), is finding opportunities aplenty to grow its business precisely because of them. Established just six years ago, initially as SB Drive Corp., the SoftBank subsidiary made headlines in November 2020 when it introduced the first self-driving buses to operate continuously in a municipality on public roads in Japan.

The landmark project is a joint effort with Sakai Town located 70 kilometers north of Tokyo in Ibaraki Prefecture with a population of 24,000. Before BOLDLY came driving autonomously into town, Sakai was facing a perfect storm of mobility trouble. First off, Sakai lacks a rail service. The nearest station is a 40-minute drive away, making car ownership essential for most working people. Nevertheless, despite the relative isolation, the town’s aging citizens are surrendering their driver’s licenses in record numbers, and at a time when bus drivers are retiring without replacements being readily available.

Maintaining a public transport service in Sakai, then, was a challenge. So when Mayor Masahiro Hashimoto heard that BOLDLY was conducting a variety of autonomous driving trials throughout Japan, including shuttle bus services, he persuaded the town council that this could be the solution they were looking for. After council members held discussions with BOLDLY, the mayor’s hunch proved prescient. Consequently, the council agreed to set aside ¥520 million ($5 million) to work with BOLDLY and fund an autonomous shuttle service for five years that will end in March 2025.

“Currently, we are operating three autonomous shuttle buses that run through the town's center for 2.5 kilometers,” says Takayuki Taguchi, Vice President, Director of Marketing Initiation Department for BOLDLY. “Both ways, that's a distance of over 5 kilometers that connects clinics, a post office, schools and banks, as well as crossing seven intersections with traffic lights.” 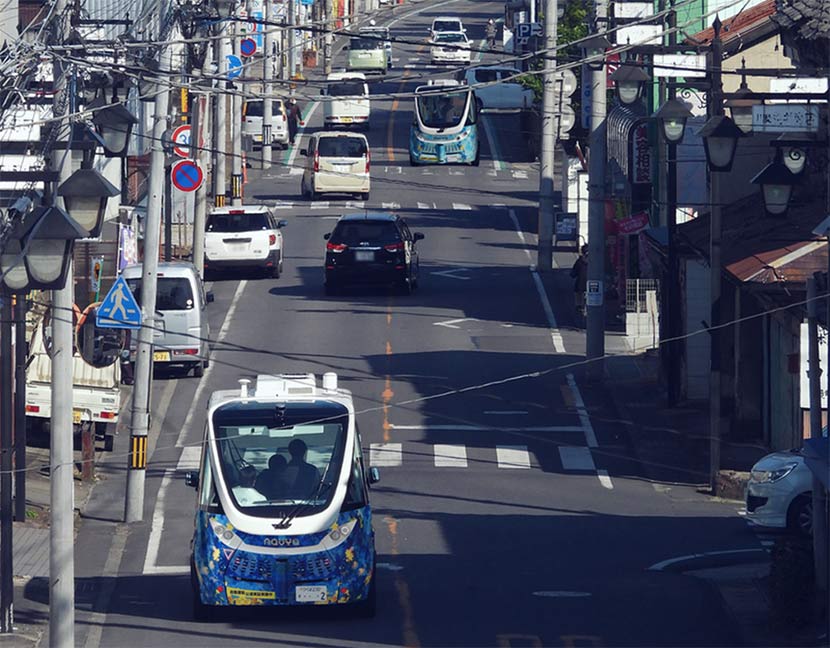 BOLDLY's autonomous shuttle bus on its route in Sakai Town

In explaining BOLDLY's approach to a project like Sakai, Taguchi first points out that the company has no interest in manufacturing its own autonomous vehicles. “It doesn't suit our business model,” he says. “The technology is changing fast. Today's technology will be old tomorrow.”

Instead, BOLDLY assesses what is available on the global market and selects the best autonomous vehicles for a particular project. Then BOLDLY works out the most practical routes and design that covers all services using the autonomous vehicles.

But before a vehicle can run autonomously along a fixed course, it needs to be prepped by installing a 3D map of the route. This enables the vehicle's autonomous driving system to pinpoint its position by comparing the map with its real-world location as described by data from GNSS and sensors such as LiDAR, a technology that uses reflected light to measure the distances and shapes of objects. To create the high-definition map, BOLDLY uses a customized car outfitted with multi-data-collecting technology that travels the route and gathers all the necessary information. The data is sent to the vehicle manufacturer, which renders it into a 3D digital map of buildings, roads, traffic signs and signals and other points encountered along the route.

After enough trial runs are carried out and the shuttle is running smoothly, the service is opened to the public. The next stage sees BOLDLY train the partner's personnel to take over management of the service. As autonomous vehicles lack standard features, such as steering wheels and brake pedals, the trainees are taught how to use the operational management equipment and special controllers required to operate the vehicles manually on board the vehicle.

For Sakai Town, BOLDLY supplied three ARMA driverless buses manufactured by Navya, a French company specializing in autonomous vehicles. These can accommodate 11 passengers and travel at speeds less than 20 kilometers an hour.

When the project began, security personnel and a driver were required to ride with passengers as a safety precaution. But after six months of smooth, accident-free operations, BOLDLY started to operate the service with only a driver present in a shuttle. The three-bus shuttle service also runs autonomously under the supervision of a trained operator working remotely from a central location. 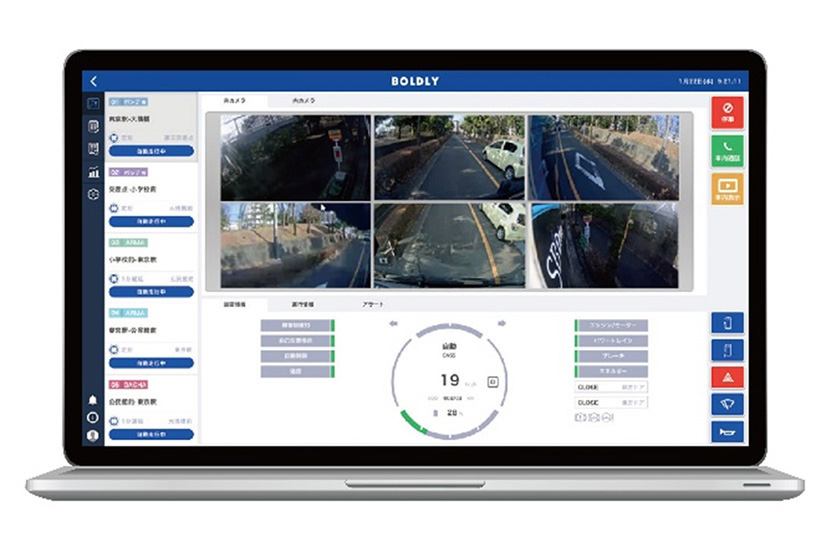 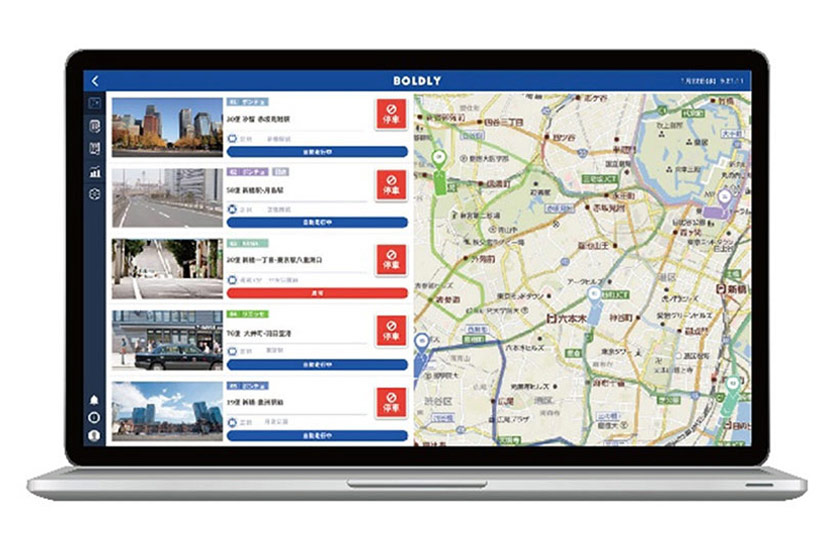 The equipment the remote operator uses is BOLDLY's autonomous vehicle operation management platform called Dispatcher, which BOLDLY believes the essential system for managing autonomous vehicles. It enables real-time wireless monitoring of both inside the vehicle and its surroundings, as well as allowing the operator to take control of the vehicle if required. In addition, an AI function has the capability to detect passenger movement, such as when exiting and boarding, and to prevent starting until they are seated.

In the future, Dispatcher will feature an operation scheduling system that automatically instructs the vehicle to start at an appointed time. Once the shuttle receives the instructions from Dispatcher, it will monitor its surroundings and depart automatically after confirming that all is safe.

“As this is the first time for an autonomous shuttle without steering wheels and brake pedals to run on public roads as part of a regular municipal service, we have to deal with normal traffic conditions that include cars, pedestrians, cyclists and animals, so we've learned a lot, and keep learning every day,” says Taguchi.

Starting from July 2021, direct express bus services will connect Sakai Town with Tokyo station. BOLDLY is planning to add routes that include this express bus terminal, and this is expected to bring more benefits to residents and visitors.

While the company plans to expand into emerging markets such as MaaS, BOLDLY has its work cut out to meet current demand for autonomous shuttle bus services. Since the Sakai project got underway, the company has received many inquiries from local governments across Japan interested in starting up similar services.

Moreover, the company expects interest to soar further when the central government plans to update its regulations next fiscal year to allow Level 4 autonomous operations. This is full autonomous driving without a driver under the Operational Design Domain.

“Communications with the government is getting better year by year, and we welcome the trends of deregulations for autonomous vehicles” says Taguchi. “No doubt the government is keen to foster global leaders in Japan, and to take the initiative in this new field.”

And no doubt the government also sees autonomous vehicles as one answer to the country's shrinking work force.