On August 4, 2022, SoftBank Corp. (TOKYO: 9434) President & CEO Junichi Miyakawa presented earnings results for the first quarter (June - April, Q1) of the fiscal year ending on March 31, 2023 (FY2022). At the press conference held in Tokyo, Miyakawa discussed Q1 FY2022 financial results, progress being made toward full-year FY2022 forecasts and the impact of making PayPay Corporation a consolidated subsidiary, which is scheduled to take place on October 1, 2022. 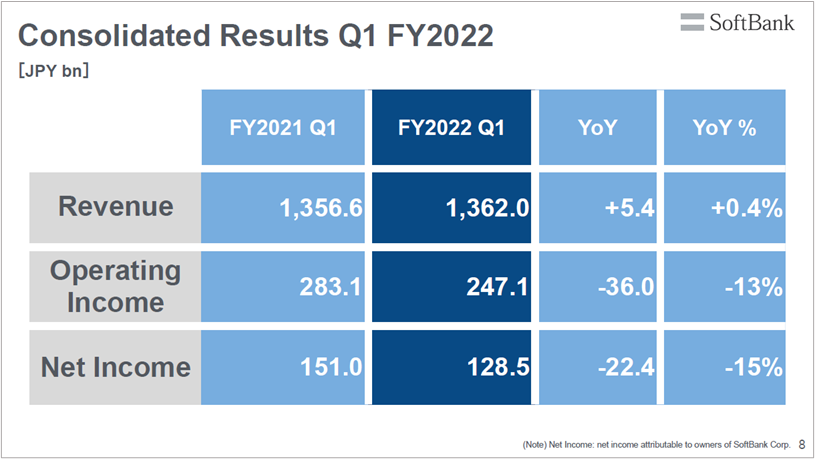 Miyakawa summarized SoftBank’s Q1 FY2022 results as a quarter of increased revenues and lower profits compared to the same period in the previous fiscal year. Revenue increased by 0.4% to 1362.0 billion yen year-on-year (YoY) while operating income and net income decreased by 13% and 15% YoY to 247.1 billion yen and 128.5 billion yen YoY, respectively. Revenues increased in the Enterprise, Yahoo! JAPAN/LINE and Distribution segments to offset a 4% YoY decrease in the Consumer segment. Operating income decreased in all segments YoY.

Despite the YoY decrease in Q1 profits, Miyakawa was confident that SoftBank is on track to achieve its full-year growth forecasts in FY2022, with 23% of revenue, 24% of operating income and 24% of net income achieved in Q1. “These forecasts factor in the future consolidation of PayPay,” said Miyakawa, “and we’re making good progress toward achieving our full-year targets. We also expect we’ll be able to earn more than 1,000 billion yen in operating income for the full fiscal year.” 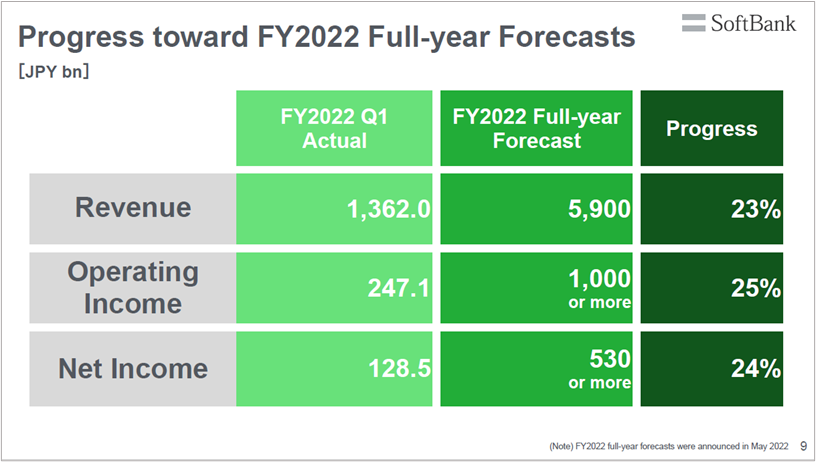 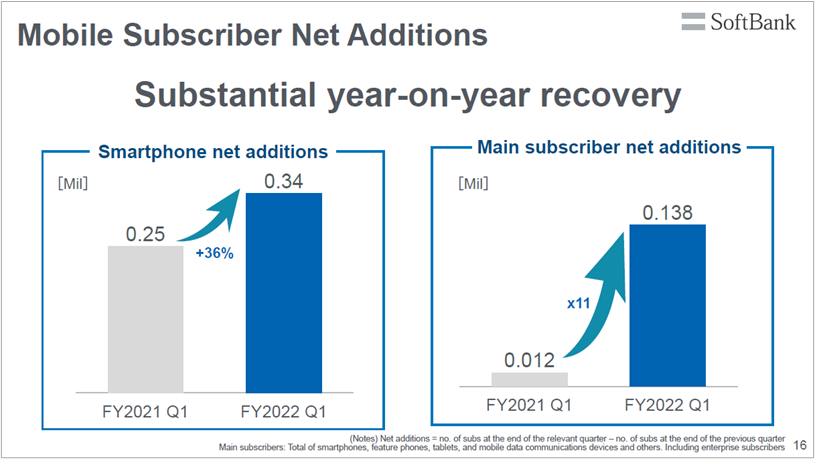 Despite a 16% decrease YoY in operating income in the Consumer segment in Q1 due to mobile service price reductions and an increase in acquisition costs, among other factors, steady progress is being made toward operating income targets, with 32% of the full-year target already achieved in Q1. Miyakawa noted that he expects the impact of mobile service price reductions will bottom out this fiscal year.

Miyakawa touched upon the Q1 performance of PayPay, which will become a consolidated subsidiary on October 1, 2022. Since launching barcode-based smartphone payment services in October 2018, PayPay now has over 48 million registered users and a 67% share of Japan’s barcode market, making it No. 1 in the country. PayPay’s Gross Merchandise Value (GMV) for Q1 FY2022 was 1.7 trillion yen, a 38% increase YoY.

“Until now, PayPay has been in a business growth phase of planting seeds; next I would like to move it into a phase of full-fledged monetization,” said Miyakawa. SoftBank and its subsidiary Z Holdings will work closely to link their respective customer bases and services to achieve this goal. 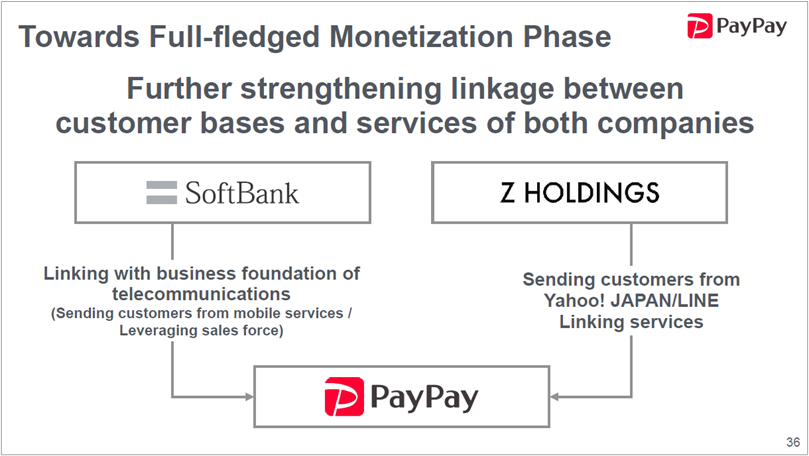 By jointly managing an intermediate holding company with Z Holdings, both companies can help expand the reach of PayPay’s ecosystem, and this will in turn drive the growth of SoftBank’s Consumer and Enterprise segments, and across the SoftBank Corp. group companies. 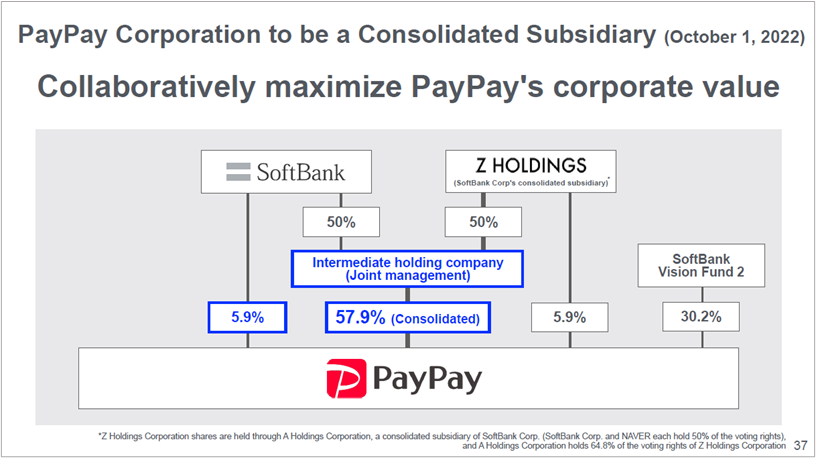 With the consolidation of PayPay on October 1, 2022, a recognition of remeasurement gain will be recorded in Q3, and that the precise amount will be disclosed in due course. Miyakawa said he expects PayPay will become profitable in the future and make positive contributions to SoftBank’s earnings.

PayPay’s consolidation in October 2022 will be a catalyst for the establishment of a new segment in Q3, tentatively called the “Financial Business” segment. 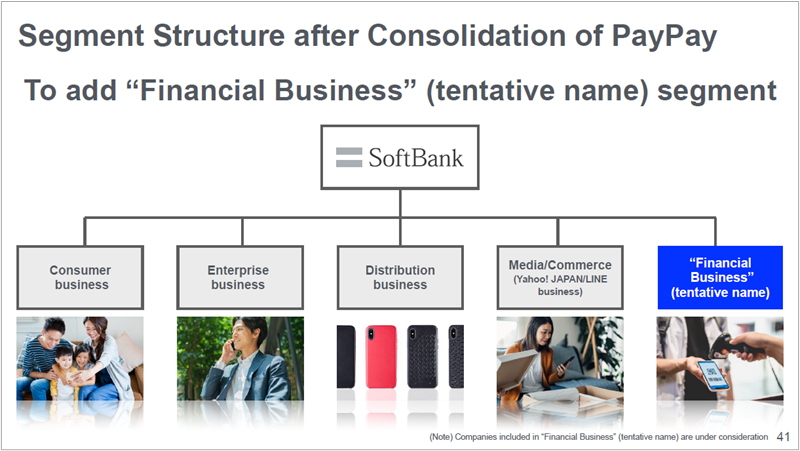 As a core part of SoftBank’s business portfolio, the payment and finance businesses in this new segment will further accelerate SoftBank’s “Beyond Carrier” strategy, Miyakawa said.