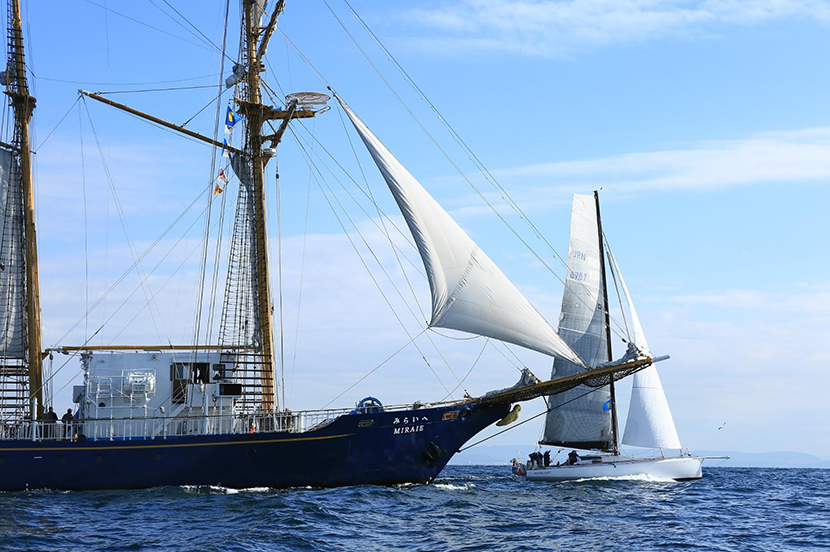 Emperor Akihito’s ascension to the throne in May 2019 marked the start of the Reiwa era in Japan. 2019 also marked the 25th anniversary of the Republic of Palau’s independence and the start of diplomatic relations between Palau and Japan. To commemorate their long-lasting friendship, both nations held the 2019-2020 Japan-Palau Goodwill Yacht Race, which started on December 29, 2019.

The event was the first long-distance international high seas race to originate from Japan since the Guam Race was held in 1996. SoftBank Corp. (TOKYO: 9434) also contributed to the race with something special to aid communications.

A landmark event to deepen the Japan-Palau relationship 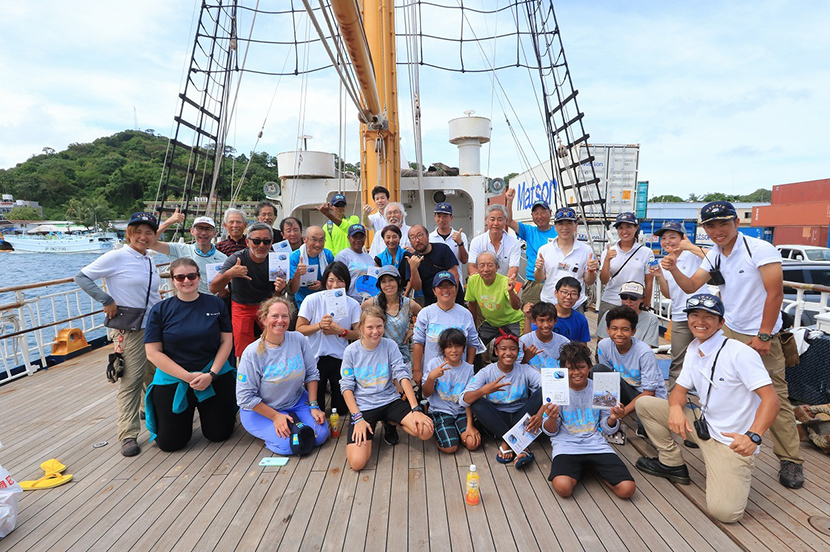 The event consisted of three parts.

The first was the yacht race on the open seas, and the second consisted of activities to promote yachting to children. On the day before the race, six junior sailors from Palau were invited to compete with six junior sailors in Japan along Hakkejima, a small island off the shore of Yokohama, in a race to promote goodwill. Through the sailing competition, children from both nations got to learn about each other.

The third part was concerned with a survey of microplastics. Researchers from the Japan Agency for Marine-Earth Science and Technology (JAMSTEC) were aboard the oceanographic research vessel MIRAIE, which escorted the yachts for the entire race along the open seas. The MIRAIE’s use of special sampling equipment attracted attention as an example of how yacht racing and environmental survey activities can complement each other.

The six junior sailors who came to Japan from Palau boarded the MIRAIE to learn more about its capabilities. In addition to participating in the Hakkejima race, they were able to enjoy the rare experience of returning to their home country of Palau by sea. 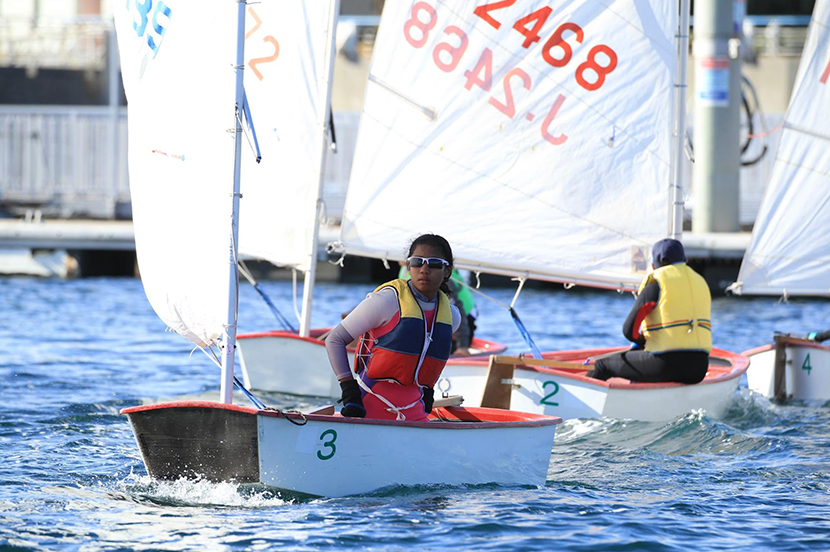 In the spring of 2019, the Japan–Palau Goodwill and Friendship Yacht Race Committee in Japan donated 20 junior yachts to Palau.

The children of Palau, who are surrounded by the ocean but are without a yacht sailing culture, were taught to sail by instructors dispatched from Japan. This activity was done with a view to promoting the spread of yachting in Palau over the long term.

On December 29 before the race, the participating sailboats held a parade under the Yokohama Bay Bridge. When the race officially started at 1:30pm, the racing yachts set off for the island nation of Palau, located 3,200 kilometers away in the southern seas. At the Yokohama Bayside Marina, more than 40 boats, including yachts and sightseeing boats, gathered to watch. 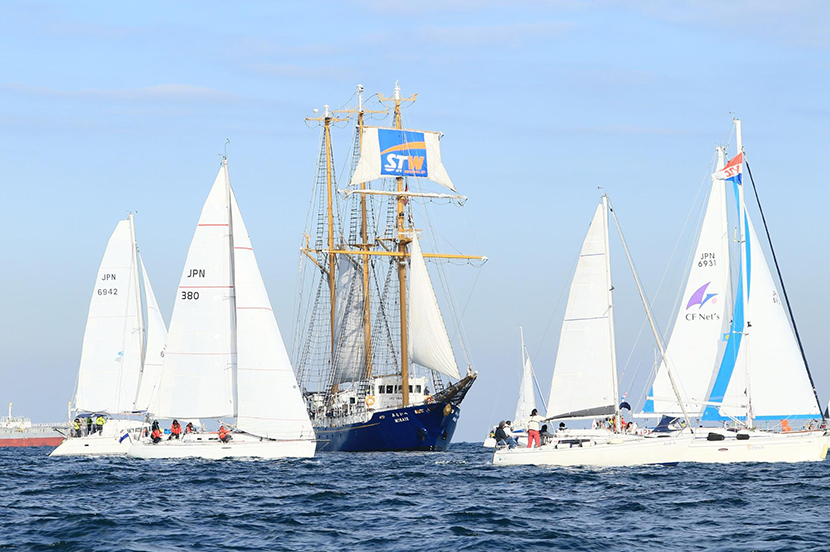 A total of seven teams participated in the race, with teams from all parts of Japan, including Hokkaido in the north and Okinawa’s Miyakojima in the south. Team Palau MINNIE, led by skipper Masahiro Tomari, consisted of two members from Japan and four members from Palau. This goodwill event demonstrated teamwork from people of both nations.

In the earlier part of the race, the competitors encountered low-pressure systems and rough weather. But thanks to their fine seamanship, the sailors overcame these challenging conditions to proceed south. 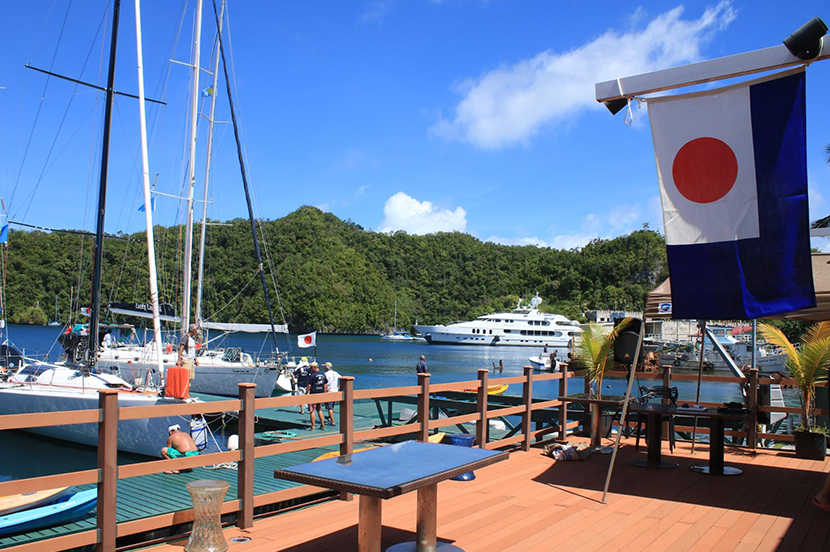 Ten days after embarking on the race from Japan, Team Altair III crossed the finish line in the summer paradise of the Republic of Palau on January 8 at 5:41pm. With the arrival of Team Kamometobu on January 11 at 7:11pm, the epic race of more than 3,000 kilometers came to a close. There were no major mishaps, and all the participants finished the race in good condition, deeply moved by the experience. 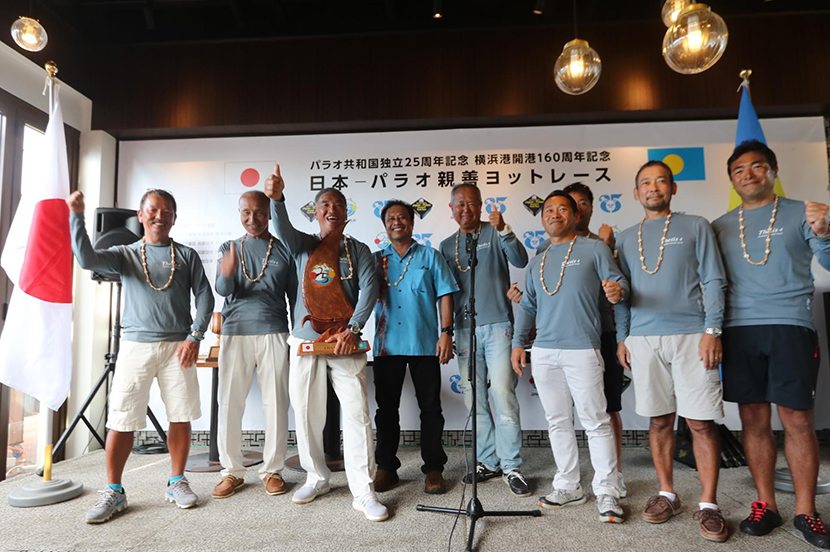 Team Thetis 4 were the overall winners of the race. The victors were thrilled to see President Remengesau at the award ceremony.

Satellite phones played a key role on the open seas 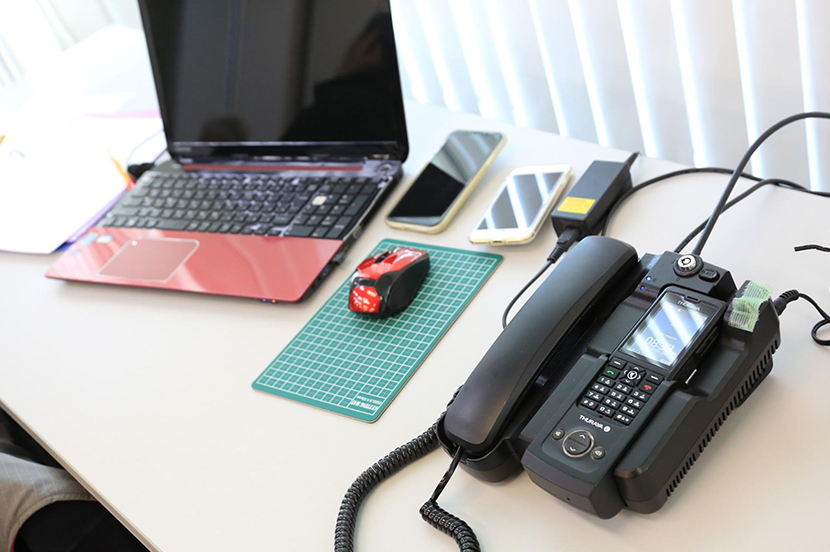 A 501TH satellite phone connected to a unit for use indoors

Yacht races take place on the open ocean, far away from land. As such, the yachts are not in range for conventional mobile phone communications.

To ensure there is a way for the crew to get into contact with those onshore quickly in case there is trouble at sea, SoftBank loaned out a number of 501TH satellite phones manufactured by Thuraya Telecommunications Company. The phones gave participants, organizers, family members and other related parties peace of mind as they knew there was a means of communication for emergencies, even in remote areas far away from shore. The 501T also played an essential role in enabling communications between the onshore control centers in Japan and Palau, and also with the MIRAIE vessel, which was equipped with the 501T.

Since the handsets link with satellites at an altitude of approximately 36,000 kilometers above ground, satellite phones are not dependent on land-based infrastructure. As such, they are an essential tool for high-risk events that are at the mercy of the forces of nature. 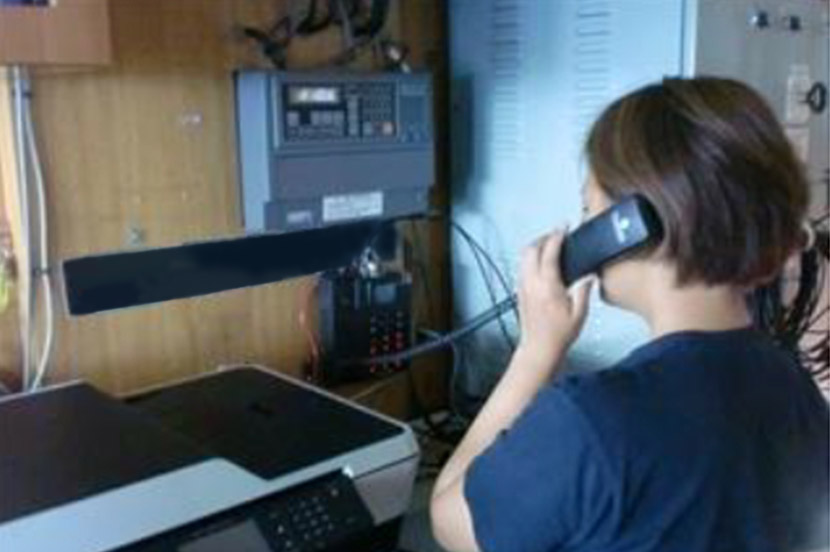 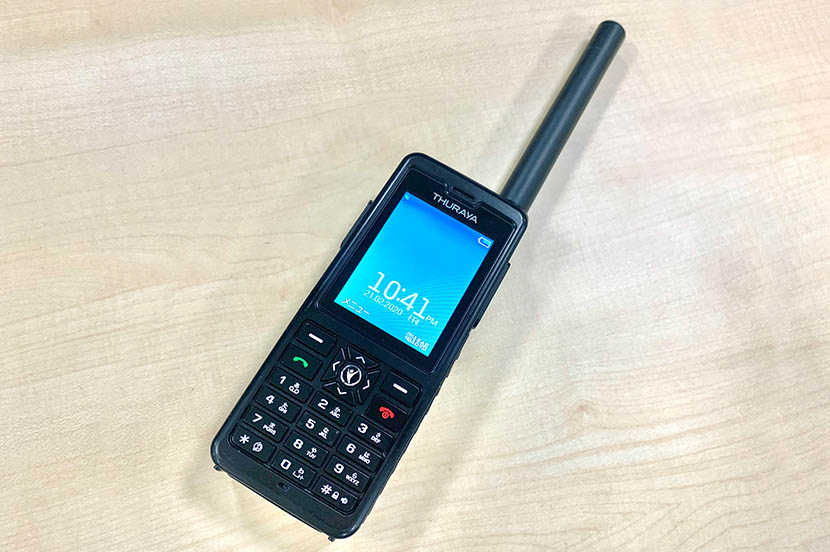 Since it does not rely on land-based communications infrastructure, the 501TH can be used anywhere for emergencies. It can connect out in the ocean, on mountain ranges and in other areas where traditional mobile coverage is lacking. The 501TH played an important role in the yacht race.

To put on the 2019-2020 Japan-Palau Goodwill Yacht Race, many first-time logistical challenges had to be overcome, including customs inspections before landing, passport control and quarantine, and preparations stretched back more than three years. SoftBank got involved more than a half a year in advance and, in close cooperation with the Palau Embassy in Tokyo and the Japan Sailing Federation, proceeded with the preparation of satellite phones.

This yacht race was more than just a competition. It was a landmark goodwill event that helped bring Japan and Palau closer together, educate children and deepen humanity’s knowledge of the ocean.

A Message from H.E. Francis Matsutaro, Ambassador of the Republic of Palau to Japan 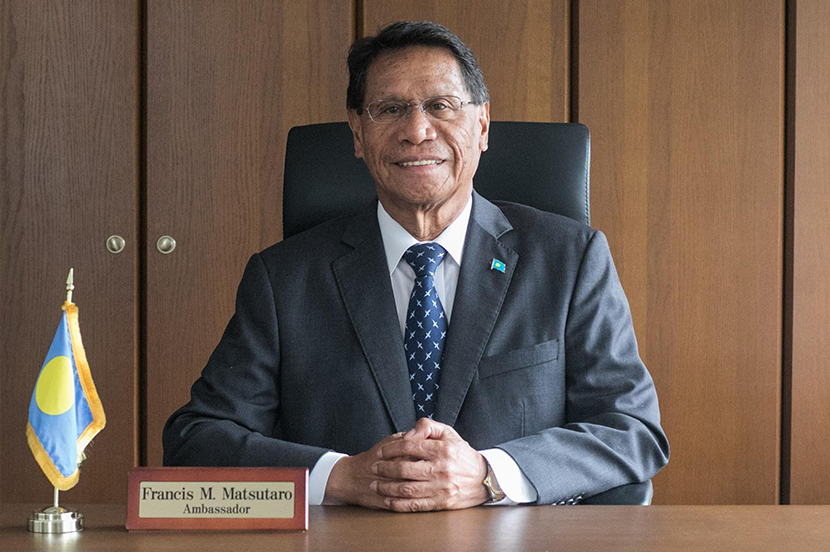 The 2019-2020 Japan-Palau Goodwill Yacht Race was an event to mark the end of a series of celebrations for the 25th anniversary of Palau-Japan diplomatic relations in 2019.

Departing December 29, 2019 out of Yokohama was the first high seas race held from Japan to Palau. The award ceremony on January 15, 2020, symbolically marked the next 25 years of relations between the two countries. The race reminded us the ocean connects us, and does not separate us. I am pleased as both President Remengesau and Mr. Kohta Fujiki, as the Honorary Consul-General of Palau based in Yokohama, co-chaired this event.

A plan is set to have this yacht race continue on a regular basis. Based on the 25th anniversary theme of “Peace and Friendship,” this yacht race will help foster the legacy of our relationship. I wish to extend my appreciation to the organizers and in particular to Mr. Kazuaki Kaido, Chairman of the Executive Committee and Mr. Hajime Nitta, Secretary-General of the Executive Committee.