Over the years, mobile communication technologies have evolved in cycles lasting approximately 10 years, as evidenced with commercial 3G and 4G services launching around 2001 and 2010, respectively. The world is now witnessing the full-fledged roll-out of 5G services in 2020.

While it is still early days for 5G, researchers around the world, including those at SoftBank Corp. (TOKYO: 9434), are already looking beyond 5G and taking up the challenge of developing an even more advanced mobile communication network technology—6G, or “Beyond 5G/6G Services.”

Terahertz is key to Beyond 5G/6G Services

What are Beyond 5G/6G Services, and what will they bring to the field of information and communication technologies? Even researchers working in this field do not yet have definitive answers to these questions. However, discussions regarding technologies that could be incorporated into Beyond 5G/6G Services are already underway. Some are suggesting that the utilization of “terahertz waves” is key to the practical application of 6G technologies. 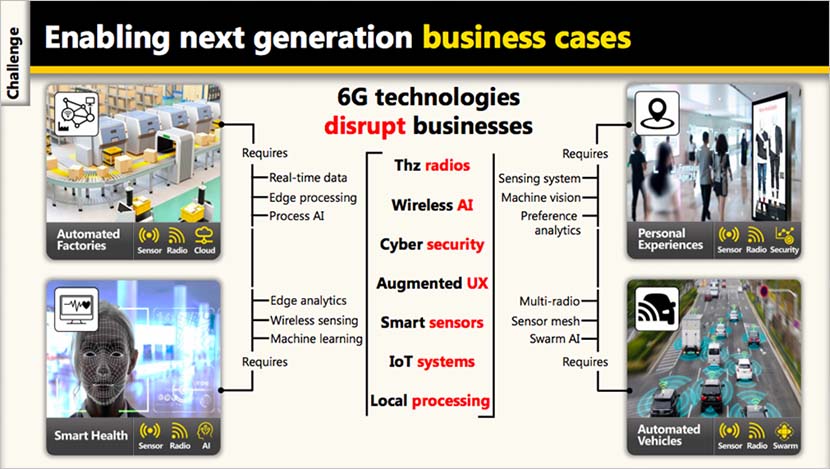 The above slide is taken from an IEEE CSCN 2018 presentation given by Prof. Ari Pouttu, University of Oulu, Finland. Prof. Pouttu is predicting that that services utilizing the terahertz frequency range will be widespread in 6G networks.

“Terahertz Waves” combine the best of radio waves and light

So why are terahertz waves attracting global attention?

Terahertz waves lie between 300 gigahertz (GHz) and 3 terahertz (THz) in the frequency range of the electromagnetic spectrum. Being halfway between radio waves and light waves, the range’s major characteristics include both radio wave transparency and straight light propagation.

Unlike x-ray technology used extensively in healthcare and other industries, terahertz waves have no ionization effect; that is, it is said they do not damage original material structures and are therefore safe from a biological standpoint.

Moreover, terahertz waves have different absorption properties depending on the type of material they come into contact with. While they permeate paper, fabrics, woods and plastics, they do not penetrate conductive materials such as metals and water. Taking advantage of these properties, terahertz waves can be used, for example, to analyze chemicals by measuring the strength of the faint signals that are reflected when they are directed toward an object. They can also be used to investigate what lies underneath the surfaces of prized paintings housed in museums, for example, and even for sensing and monitoring changes in the environment from satellites.

If they have such useful properties, some may ask why terahertz waves have not been utilized in telecommunications technologies before. The answer is quite simple: people have not been able to make full use of them, until now.

Positioned halfway between radio waves and light waves, terahertz wave frequencies are too high for use as radio waves and too low to be utilized as light waves. This makes generating and detecting them problematic when utilizing traditional technologies. In addition, the propagation properties of terahertz waves in the atmosphere vary significantly by wavelength. This also makes them difficult to handle as there are still many unknowns regarding the propagation of waves in the different environments where they could be used.

Communication technologies have continued to evolve significantly. For instance, the introduction of 4G brought high-speed telecommunications using smartphones, and 5G is now enabling industrial applications that utilize IoT devices. In this context, demand to use different frequencies is increasing. Accordingly, there are growing expectations for the utilization of terahertz waves, where a wide range of frequencies remain untapped. This frequency range is thus being hailed as a potential savior for the ultra-high-speed communications of the future.

When will terahertz wavebands be available for use?

Laws and regulations are yet to be established on how terahertz wavebands will be used in each country, but discussions are currently underway at the international level. At the Institute of Electrical Electronics Engineers (IEEE), which works to standardize electrical communications-related applications and is well known for its achievements in setting standards for Wi-Fi communications, investigations are ongoing to determine channel allocations for terahertz waves.

Channel allocation plan currently being considered by IEEE. Each channel is expected to have a bandwidth of at least a few GHz.

Additionally, ITU-R, the wireless communications sector of the International Telecommunication Union (ITU), has drawn up guidelines for allocating global frequency resources. At World Radio Congress 2019 (WRC-19), last year’s ITU-R meeting, the use of terahertz waves was discussed with consideration given to interference with Earth Exploration-Satellite Service (EESS). As a result, an agreement was reached on new applications for the 275-450GHz frequency range as an outcome of WRC-19.

Under these circumstances, governments around world are actively working to ensure competitiveness in their respective countries. In March 2019, the US Federal Communications Commission (FCC) set forth new rules for utilizing the frequency band from 95GHz to 3THz. In Japan, too, while keeping an eye on global trends, a number of organizations, including academic research institutes, are taking part in a terahertz project called “ThoR” (i.e., TeraHertz end-to-end wireless systems supporting ultra-high data Rate applications), which aims to put terahertz waves into practical use in cooperation with countries across Europe.

Working toward the practical use of terahertz waves for communications

One assumed case for the use of 6G networks. Wired server racks could go wireless.

SoftBank Corp.’s view of Beyond 5G/6G Services envisions a combination of the strengths of smartphones and terahertz-wave technologies. However, before the arrival of terahertz wave-based communications, a number of issues need to be resolved.

For example, how could a compact handset capable of transmitting and receiving terahertz-wave communications be used in an optimal manner? What antennas or microchips are best suited for a diverse array of applications? And how will they be evaluated?

To launch the research and development of terahertz-wave technologies, in 2018, Japan’s National Institute of Information and Communications Technology (NICT), Gifu University, and SoftBank Corp. signed a joint research agreement. In this partnership, a terahertz wave-based communication environment was constructed inside an anechoic chamber using the lowest end of the terahertz frequency range, 290GHz. In this environment, both parties are carrying out simulated experiments, exploring antennas to be used in smartphones, and evaluating the practicality of utilizing terahertz-wave frequencies. 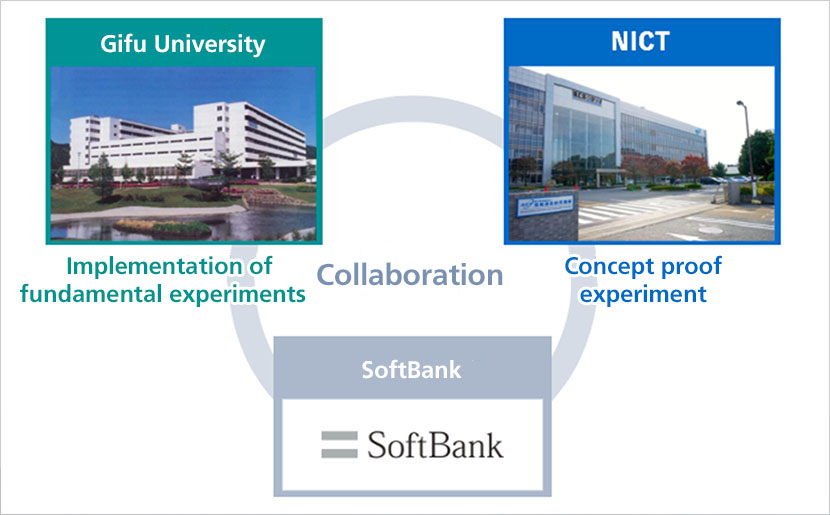 Gifu University is making full use of the latest optical technologies to undertake experiments in which terahertz waves are generated and measured.

Terahertz waves in the 240-340GHz frequency range have been successfully generated, a significant result that could lead to the further research and the development of applications in the future.

NICT utilizes its expertise and superior testing environment as a core research center for the development of terahertz applications in Japan. Through jointly conducted experiments, the viability of terahertz waves is being evaluated. Internationally, NICT is also a hub for joint projects involving terahertz technologies.

Research in the field of telecommunications has entered the uncharted territory of terahertz waves, and expectations are growing for further technological advances. SoftBank will continue to pioneer initiatives aimed at realizing the practical application of 6G technologies.