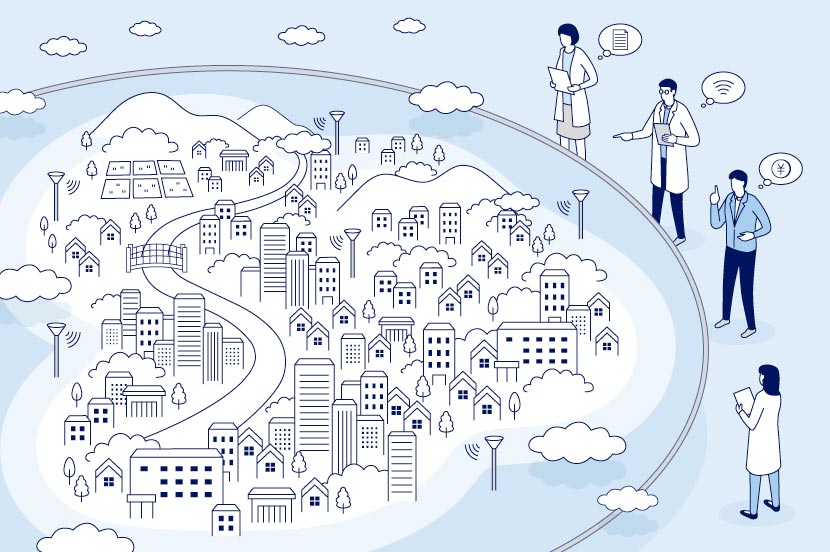 Constantly taking up new challenges and continuing to evolve are key to SoftBank’s DNA. Going beyond the boundaries of a telecommunications carrier, SoftBank Corp. (TOKYO: 9434) is committed to pioneering transformative services, and research and development (R&D) plays a key role in this endeavor. SoftBank News editors spoke to Takashi Tsutsui, Senior Vice President and Chief Scientist at SoftBank Corp., to learn more about his Office, which evaluates technologies for communication, a core part of SoftBank’s business. 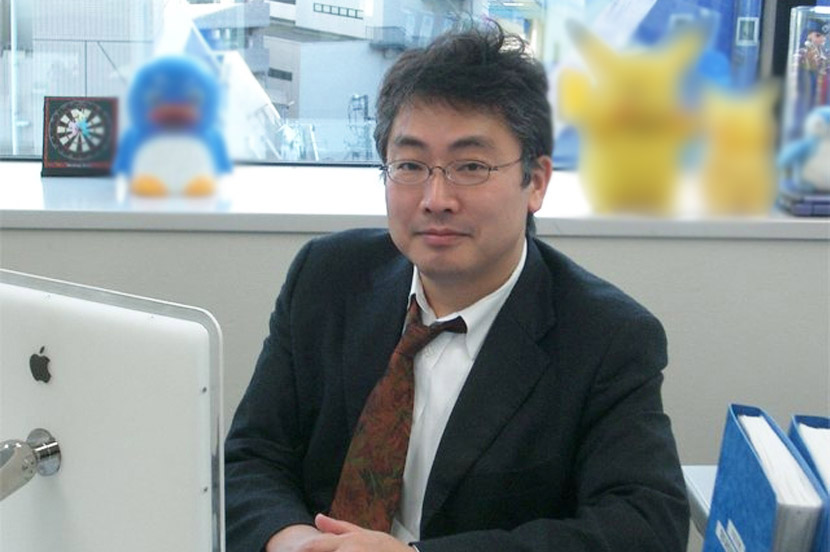 Evaluating technologies theoretically and experimentally with a view to future commercialization

What’s the role of the Chief Scientist Office?

Simply stated, our mission is to evaluate new technologies. The word “evaluate” may sound superficial, but we’re not conducting mere evaluations. Based on the assumption that SoftBank will provide services using newly developed technologies, we evaluate whether or not a technology can yield sufficient returns to justify the capital expenditure, as well as if it has a practical use that can be sustained throughout operational lifecycle in services.

What types of technologies do you evaluate?

Our evaluation work mainly focuses on wireless communication technologies, particularly those related to radio wave transmission and the construction of telecommunication areas. For instance, for 5G services, new frequency bands called “Sub-6” and “millimeter-wave” are being utilized. Among the bands being used by SoftBank, the “3.9 GHz range” and “29 GHz range” are classified as Sub-6 and millimeter-wave, respectively. These frequency bands are extremely difficult to apply to the transmission of communications data.

Radio waves in the 3.9GHz range rarely diffract. So, in order to create telecommunication areas like those created using low-frequency bands, a technology called “Three-Dimensional (3D) Beamforming” has been developed and is being utilized in 5G networks. This technology enables simultaneous communications between multiple users. Because this change in specifications has been incorporated into 5G networks, it’s now possible to cover an extensive telecommunication area using the Sub-6 GHz frequency band. This is one of the core technologies for 5G services.

Does this mean the application of these technologies to 5G communications is on the horizon?

3D Beamforming entails the use of multiple antennas on a single base station. Using a technology called “Spatial Division Multiple Access (SDMA),” radio waves are exclusively allocated to each user, thereby enabling multiple user access at the same time, even in urban areas where many people are using the service. One of the features of 5G communications is that the Sub-6 frequency band successfully enables practical use at macro-base stations that cover wide areas. Yet another is multiple simultaneous access. It’s no exaggeration to say these two characteristics are what 5G is all about.

There were originally several different required specifications for 5G services. Among them, SDMA was regarded as one of the technologies that those involved in the world of mobile communications were eager to achieve early on.

At the Chief Scientist Office, we quickly implemented the use of 3D Beamforming for SDMA. The result was “massive multiple-input, multiple-output,” or “massive MIMO,” system that utilizes SDMA, making it one our technologies that was made available in the 4G era.

As it turned out, massive MIMO became a key technology for 5G networks as well. The application of 5G requires a significantly different way of deploying network area coverage compared to traditional methods. This makes it impossible to build out 5G network coverage area within a short amount of time, and I think that the head start we had with some of our technologies gave us a huge advantage.

There’s no magic bullet in telecommunications – continuous progress is key 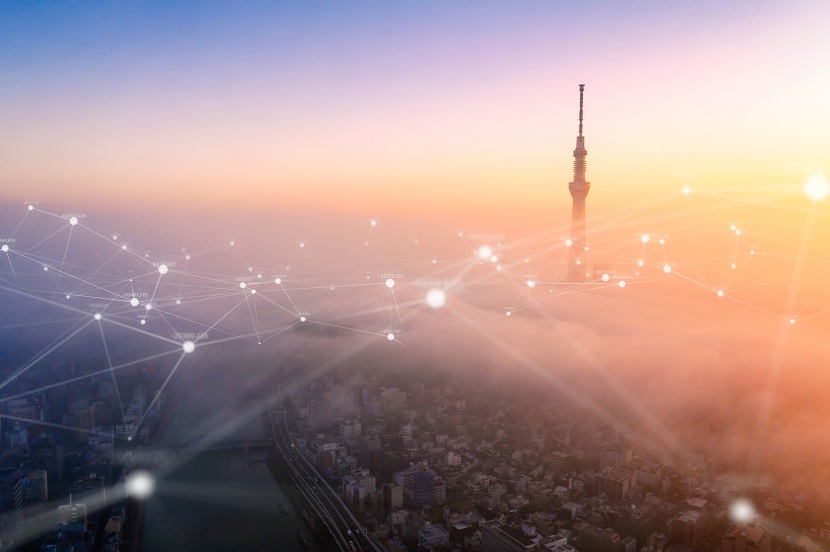 Is there anything you’ve been working on for the future that’s now being used in 5G?

People may regard 5G as a panacea, but there’s no magic in science-based technologies. In the field of mobile communications, it is safe to say that, early on, virtually only one set of technologies was identified as a goal to be achieved. The realization of massive MIMO, SDMA via coherent transmission systems, and Coordinated Multi-Point (CoMP) technologies are all related to that set. I believe that this is the “Alpha and Omega” in telecommunications. In other words, it’s what the evolution of telecommunications is all about.

From the beginning, we’ve narrowed our focus on initiatives and worked on them intensively. The realization of SDMA in the Sub-6 frequency band epitomizes our efforts, particularly our implementation of a technology that reduces radio-wave interference using a communication method called “zero forcing.” At the cellular border where the network coverage areas of two base stations overlap, data communications among multiple base stations are coordinated for optimization.

The evolution of communications requires steady development over generations and improvement through the accumulation of collective strengths. We’ve been working steadily with the belief that there’s no particular “magic” in telecommunications. In the end, our efforts have come to fruition in our 5G services.

So, accumulation and collective strengths are being tested as part of the development of telecommunications, right?

As I mentioned, the other frequency band used in 5G networks is “millimeter wave,” which is an even bigger challenge. Millimeter waves, including the 28 GHz range, are difficult to scatter on the surface of roads or walls. As this frequency band is also used in satellite communications, output restrictions are imposed. If a base station is built without careful consideration, the radio waves will reach as far as the eye can see.

Even with the use of 3D Beamforming, millimeter waves cannot diffract or scatter. The range of the radio waves are more-or-less limited to the area you can see with your eyes. In order to establish a communication service using this frequency band, considerable expertise is required.

Are millimeter waves really that unwieldly?

On the other hand, the 70-100 GHz range, yet to be defined for 5G communications, can scatter on road surfaces. Although there are many parameters to be considered, we have high hopes for the possibility of building street-shaped telecommunication areas using this frequency band. We’re currently conducting a baseline assessment, including theoretical studies. The theoretical study stage is where we examine radio-wave transmission and ways to construct telecommunication areas, and evaluate whether large-scale capital investment is justifiable subsequently.

Are you talking about Beyond 5G/6G when referring to the 70-100 GHz range?

At this point in time, this is only a discussion of how to start the discussion. We don’t know exactly, but I think construction methods for communication base stations will be completely different from the way they are now. Currently, network coverage surrounds a base station, but we’re hoping that coverage for 6G networks can be created along streets, utilizing rough surface scattering. With that said, this project is still at a theoretical stage. We plan to proceed with the verification process through radio-wave propagation experiments.

Higher frequency bands above the 70-100 GHz range have properties similar to those of light. We think that an antenna on a base station will be an LED panel itself, or something using an LED panel. This will be used for downloading only, but something like an advertising LED panel is believed to be most suitable as an antenna. However, this is unlikely to be achieved before 7G.

We also think that it will be effective and realistic to use ordinary objects that are not designed for wireless communications, such as LED displays, projectors used for projection mapping on building walls, albeit for night-time use only, digital signage, and other similar devices.

Evaluating technologies for robotics, the next giant industry

Other than communication technologies, what other fields do your evaluations cover?

Outside of communication technologies, we’re evaluating technologies for other major projects, including R&D for robotics, a potentially colossal industry. It’s currently small-scale, but we’re manufacturing and selling robots that utilize our Robot Operating System (ROS), which is a software platform for robots.

There are a multitude of initiatives in robotics R&D, and each of those initiatives must be clearly classified into layers. What we’re presently working on is a robotics base. We originally thought that it would be easy to enter this field, but it’s turned out to be more difficult than anticipated. It took us nearly five years to overcome some electrical issues. In the near future, we plan to begin building bodies and arms that move up and down.

What points are important in robotics R&D?

I truly believe that it’s being aware of the different tiers. For example, provided that it’s an ROS-operated robot, applications should be able to run without having to make any major change to the programs for any robot, regardless of the type. That’s what operation systems or platforms are for.

Additionally, simulations on a platform that don’t use actual robots must be made possible. Recording and playback must also be possible to verify if operation results of the coordinate system are unified. Furthermore, information has to be open-source, with abundant reference materials. I believe it should be made so that anyone can easily learn how to operate the robot.

In short, robots and applications need to be clearly two-tiered. It would be outrageous to have to reprogram applications simply because a change has been made to a robot. As I said, various applications can be created only after a robot is created on a platform.

What types of R&D projects are you working on now?

Robotics R&D is still in its infancy – it’s similar to when some stagecoach builders were turning into car manufacturers. Hoping to enter the market in some way, we’re desperately going through a process of trial and error (laughs).

At the moment, we’re developing an autonomous robot called “Cuboid.” This robot is taking part in demonstrations where it travels around the building, including up and down elevators, to deliver things and perform other tasks. There are robots that get on elevators in Europe and the U.S., but that was achieved in those countries by making alterations to the elevators. What we’re trying to achieve here is to create an application programming interface (API) from scratch, so that the robot automatically gets on a regular elevator, without requiring elevator alteration. In other words, it’s a serious trial with the future firmly in sight.

We’re also carrying out trials with Cuboid in which it travels along public streets in the Takeshiba area of Tokyo, where the SoftBank headquarters is located. Restrictions are relaxed for demonstrations. For larger robotics R&D initiatives, we’re moving forward step-by-step in focused areas. 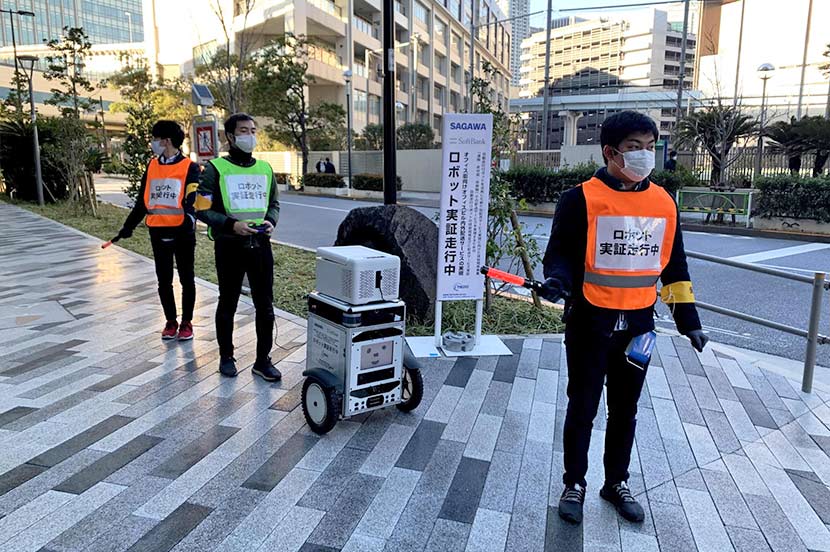 What types of challenges are you embracing for in the future?

Our first aim is to refine our robotics products so they can be used for various tasks. As we manufacture robots, albeit on a small scale, I hope that they’ll be introduced for trial commercial use as well. We’ve also been striving to improve robotic designs, with the intent of creating more attractive, well-received robots. 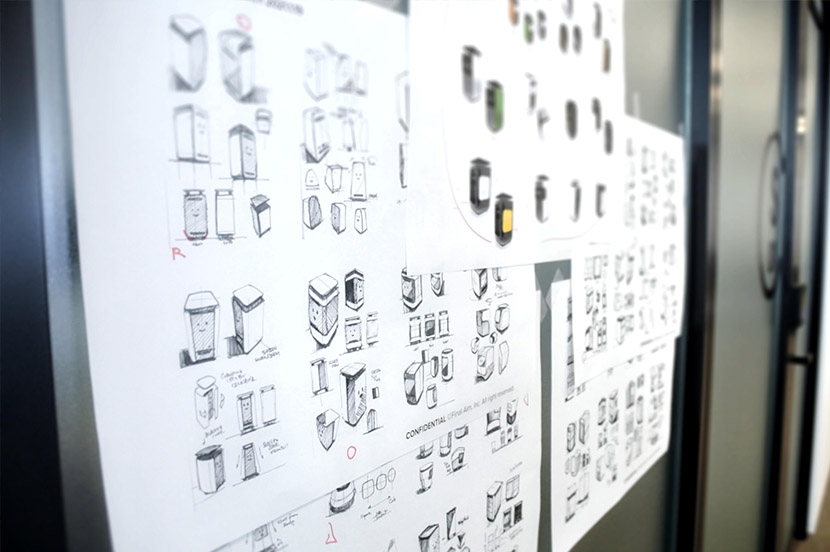 Final Aim Inc. is collaborating with SoftBank in design development

In addition, as part of our R&D activities, we’re preparing to take part in the RoboCup@Home event and the Future Convenience Store Challenge hosted by the World Robot Summit. In the latter competition, robots are tasked with shelf stocking and disposing of products in a convenience store. Removing goods from a shelf may sound easy, but in fact, it involves a surprisingly wide range of complex tasks, from being able to recognize specific products to designing an arm capable of smoothly and steadily grabbing products and stocking and removing them. 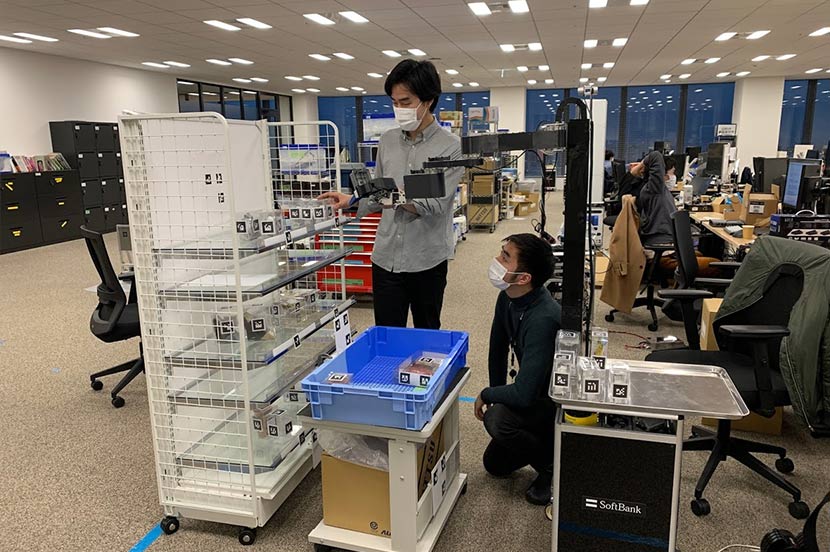 The robotics industry is expected to grow into a massive one. We’re like a small-scale stagecoach builder, but our ultimate goal is to build a system that enables us to independently perform the integrated development of robots from scratch. Our office is also highly independent and given high levels of freedom, with relatively high autonomy given to individual personnel. In such a favorable environment, we’ll make the most of subsidies from government agencies and participate in advanced research projects to help to nurture nascent industries.