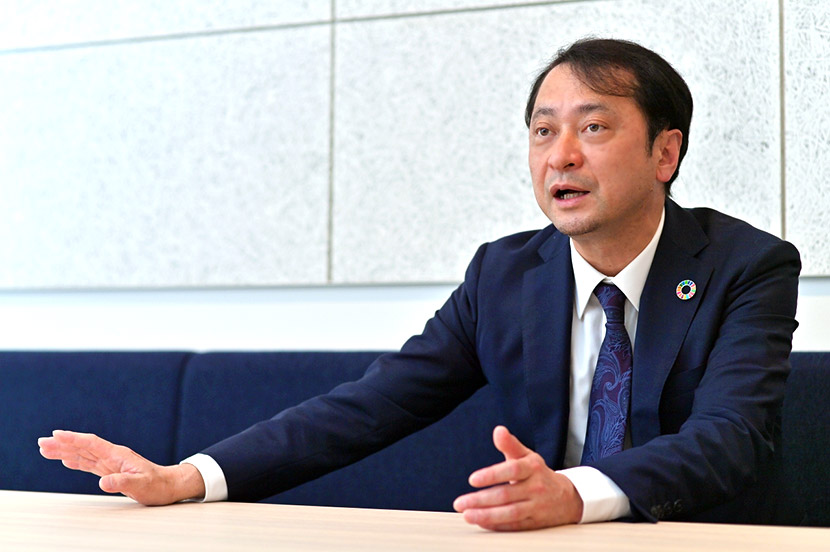 Junichi Miyakawa, SoftBank Corp.’s (TOKYO: 9434) new President & CEO as of April 1, 2021, spoke to SoftBank News to outline future areas of focus and his vision for the company. 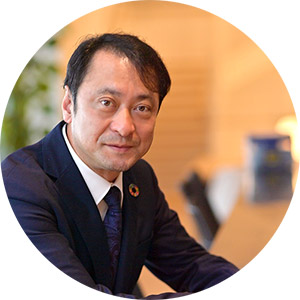 Junichi Miyakawa
President & CEO
SoftBank Corp.
After getting his start as an Internet company founder and entrepreneur, Miyakawa joined what is now the current SoftBank Corp. in 2002, and later became CTO, Director & Executive Vice President in April 2006. After a stint at Sprint Corporation in the US as Technical Chief Officer in 2014 and Senior Technical Advisor in 2015, Miyakawa returned to Japan as SoftBank Corp.’s CTO in 2017, and in April 2018 assumed the post of Representative Director & CTO. On April 1, 2021, he became President & CEO.

Focused on the digital transformation of society

What will you focus on as CEO?

In a word, AI. I want to accelerate all our AI initiatives, and I believe we need to harness AI in a way that only an operating company like SoftBank Corp. can.

In October 2016, I returned to Japan to take up the CTO position at SoftBank Corp. after completing my assignment at Sprint Corporation in the US. Ken Miyauchi, who was SoftBank Corp.’s CEO at the time, asked me to launch AI and IoT initiatives in earnest. We started a variety of projects, and many have since taken shape, such as the AI and IoT platform that’s being used at our Takeshiba headquarters building.

Also, I lead MONET Technologies, a joint venture with Toyota announced in October 2018, and this company is using AI in the self-driving field. We’re now moving toward a phase where there’s widespread momentum to realize a self-driving society in Japan.

AI is essential to digital transformation (DX), and AI will make smart buildings and smart cities a reality. With the world crying out for digitalization, SoftBank Corp., as a "comprehensive digital platformer" that fully utilizes AI, must promote DX at companies and local governments. This is aligned with our strategy to contribute to the SDGs.

2021 also marks the start of our full-scale 5G network deployment. As a carrier, we must win in this area, so we’ll build out a stable and resilient 5G network with a sense of urgency. Our 5G network will be world-class and robust.

In your first fiscal year as CEO, is there anything you’re particularly focused on?

Continuing to increase revenue and profits is one thing. Although we’ll be impacted by lower mobile phone rates, we’ll grow sales and profit by collaborating with Z Holdings, an initiative my predecessor Ken Miyauchi spearheaded as part of our Beyond Carrier strategy, and we’ll expand our enterprise business and other businesses. I’ll do my utmost to execute on this strategy.

Aiming to be a “comprehensive digital platformer”

You’ve said that SoftBank Corp. should be a “comprehensive digital platformer.” Can you explain what that means?

“Comprehensive” is a word that’s somewhat hard to grasp, but we used it on purpose. In addition to our mobile customers, SoftBank Corp.’s group companies have large customer bases, such as the users of Yahoo! JAPAN, ZOZO, and LINE services. We’re undoubtedly at the top level in Japan in terms of customer touch points. Each service is an AI-integrated "digital platform,” and we’re always working hard to optimize them. However, this optimization is still being done on a stand-alone basis.

Let's take the SoftBank Takeshiba headquarters building as an example to illustrate stand-alone AI optimization. At the building, there’s a function that matches face recognition data with the elevator floor destination, so that when an employee's face is recognized at the entrance gate, the elevator's destination is set to the employee's corresponding office floor. AI is used for this function, and it’s constantly being optimized.

However, when considering the optimization of an entire office building, it’s not enough to consider only two factors. We need to make comprehensive decisions based on total optimization by measuring a range of factors such as air conditioning, lighting, and CO2 concentration. A “Mother AI” is doing this, taking the decisions made by each AI and recommending the best combinations.

In the future, total optimization will be adopted not only in buildings, but also at the municipal, national and global level, and between services. SoftBank Corp. will play a key role in promoting this.

So “comprehensive” stands for total optimization?

To phrase “comprehensive digital platformer” differently, it means "taking the place of Mother AI.” The term refers to the role of optimizing various digital platforms. We've done a lot of work on this so far, and with the many digital platforms within our group of companies, we have good insight into this area.

Staying positive, no matter the challenge

How does it feel now to be CEO?

In October of 2020, my predecessor Ken Miyauchi took me aside and said, “You should lead SoftBank with a technology focus.” Our company founder Masayoshi Son also gave me some advice: “Don’t become a traditional professional executive,” he said.
It’s a heavy responsibility being CEO, but I’ve come up with some strategies of my own over the past six months, and I plan to put them into practice right away.

What lessons have you learned from Masayoshi Son and Ken Miyauchi?

Both of them are extremely positive in their outlook. When I joined SoftBank back in 2002, I faced a lot of major obstacles that made me wonder if the company was on the verge of collapse. Normally, I’d feel deflated, but the two of them always cheerfully looked for ways to surmount these challenges. Instead of running away, they thoroughly analyzed what stood in front of them and discussed what could be done with seriousness and intensity.

Once we’ve decided on what we should do, we get everyone involved and press on to make a breakthrough. The reason decisions can be made at executive-only meetings is because management remembers what it’s like on the front lines. Normally, this is something that gets lost when a company becomes large, but this ethos remains at SoftBank. I myself don't think we need executives who just sign off documents, so I intend to keep this corporate culture going.

Continuing to take on new challenges and evolve 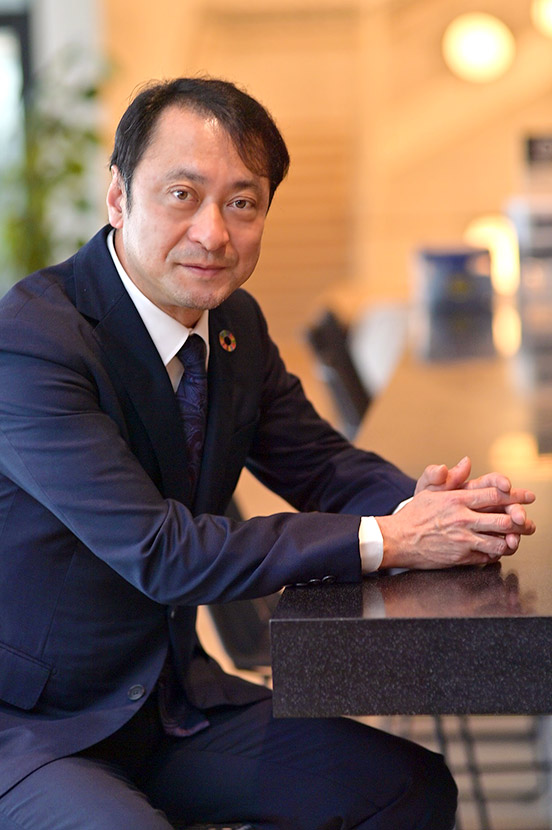 What principles do you abide by?

I believe we have to continue to challenge ourselves and evolve. SoftBank may be a large company, but I’d like to ask all employees to continually ask themselves if they’re OK with the status quo. My hope is that they’ll all say they’re not OK with things as they are.

It’s easy to stay on the defensive, but if you’re too cautious, you stop evolving. To evolve as a company, we need to take on new challenges without fear of failure. If we succeed one out of ten times but recoup the overall investment with the one major success, that’s fine. As CEO, I also believe that we need to make our company a place where employees continue to challenge themselves.

What direction do you want to take SoftBank Corp.?

Our goal is to be "the most needed company in Japan.” With our comprehensive digital platform, we want to raise awareness of SoftBank Corp.’s role as an essential provider of social infrastructure.

Before I joined SoftBank, I founded and ran an ADSL business based in Nagoya, and we had a hard time raising funds. People around 35 years of age had to raise 500 million yen every two months to keep the company afloat. I managed to get through by becoming a money-collecting machine while ignoring the technology.

There were some tough times, but I felt that my customers and many others thought that Japan would be in trouble if our ADSL service disappeared, and they always supported me. One of those people was Masayoshi Son, who invited me to join SoftBank when we were about to take our company public. He said, "Come to SoftBank. I'll take care of the other details.” I realized then that a company won’t disappear if it engages in businesses that people truly need.

We’re now in a situation where the social challenge of “digitalization” lies right before our eyes. To be able to play a major role in updating Japan, we, as SoftBank Corp. along with our group companies, will continue to challenge ourselves and evolve. 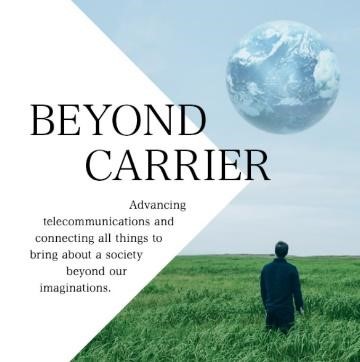 Learn more about how SoftBank Corp. is harnessing 5G, AI and IoT to grow its core communications business while expanding into new business areas.