What does converging AI with 5G technology make possible? The short answer is the transformation of an enterprise’s operations and processes into digital formats to make it more competitive and responsive in a changing technology world.

Katsuhiro Horiba, Acting Director of the Network Research Office at SoftBank Corp. (TOKYO: 9434) explains further. “By integrating AI into a 5G enterprise network and running AI applications over it, a company can improve its processes and speed of doing business, and with fewer human errors. That’s because AI enhances people’s work and effectiveness by applying intelligence to the tasks at hand.”

However, Horiba notes that such integration is a complex matter. To make it work seamlessly and smoothly requires knowledge of three technologies: advanced mobile network systems, AI management and AI applications, and new cloud computing architectures. “Few enterprises,” he adds, “have such diverse skills to make it happen on their own.”

Which is why SoftBank has partnered with NVIDIA, a computer systems design services company, and Mavenir, a developer of cloud computing software for the telecom industry, to create a research facility dubbed “AI-on-5G Lab.” The Lab is to be located in SoftBank’s headquarters in Tokyo and will open its doors next summer. Initially, the goal is to provide SoftBank customers with examples of what digital transformation can do for them, and for companies already advancing in digital transformation, the Lab provides a sandbox, or safe environment, where they can test out and optimize their AI applications on 5G networks.

But why is digital transformation necessary? Aren’t most large corporations already conducting business in the cloud and using AI in their business operations? The answer is yes. But typically, companies have merely transferred their existing services to the cloud; this can be described as the digitalization of business. By comparison, digital transformation, especially when driven by AI on 5G, changes the way companies fundamentally operate because it impacts every level of the organization, enabling them to work together in new, more dynamic ways that can lead to the creation of innovative services and solutions for customers.

To appreciate why this is possible, Horiba says it is necessary to understand that 5G is not merely another upgrade for your mobile phone. The previous 1G, 2G, 3G and 4G mobile cellular technologies essentially targeted the consumer. But 5G, with its near twenty-fold increase in data transmission speed and much wider bandwidth or capacity, is a major leap forward in fast, dense data-communications that makes it especially suitable for enterprises seeking to become more competitive and responsive to changing needs of the time. “And when you converge AI with 5G, you can have AI working everywhere, which greatly increases its effectiveness,” says Horiba.

To make this magic happen, telecom operators are designing new network architectures to match the capabilities of these technologies. SoftBank, using NVIDIA hardware, has designed an architecture characterized by its scalability, security, and low latency. The architecture employs two key enabling technologies: a virtualized radio access network (vRAN), and multi-access edge computing (MEC) running together on a single server that can efficiently handle both 5G and AI on one converged platform.

A standard radio access network consists of a base station that wirelessly connects users’ devices, e.g. mobile phones and tablets, via its own hardware and software functions to the core cellular network of a telecom operator. With vRAN, the base station functions that ran on proprietary hardware such as routers, Radio Frequency (RF) circuitry, and firewalls have been converted to software which can then be deployed on a server-based cloud platform in an enterprise’s data center.

“The benefits of virtualization are many,” says Horiba. When it's time to upgrade the system, there is no expensive hardware that needs replacing, as was previously the case. Software also increases flexibility when it comes to providing new services. And it enhances network management and deployment of 5G, as well as allowing network resources to be scaled up and down as needed.

The second underlying technology, multi-access edge computing (MEC), is a network architecture that brings computer processing closer to the end users where the data is produced, rather than sending it out over the Internet to the cloud for processing and thus incurring the penalties of lower processing speeds, extra transmission costs, and increasing security risks.

“MEC reduces latency and helps SoftBank deploy 5G more efficiently,” says Horiba. And it’s this combination of technologies—AI, 5G, and advanced cloud computing with vRAN and MEC on a single platform—“that enables a company’s data center or customer base, for instance, to now deploy updated software and new AI applications efficiently to hundreds of devices or thousands of sensors quickly and efficiently.”

And the same combination of technologies is now being assembled at SoftBank’s AI-on-5G Lab. to create an attractive environment for corporations to learn how they can begin their own digital transformation. Or, if the process of change has already begun, the Lab enables companies to test their AI applications in a safe 5G environment. For instance, tests are being planned for Intelligent Video Analysis (IVA), Virtual Positioning Systems (VPS), Virtual Reality (VR), Augmented Reality (AR) and other applications. Solutions could also be applicable to use cases such as smart retail and factory automation, among others. 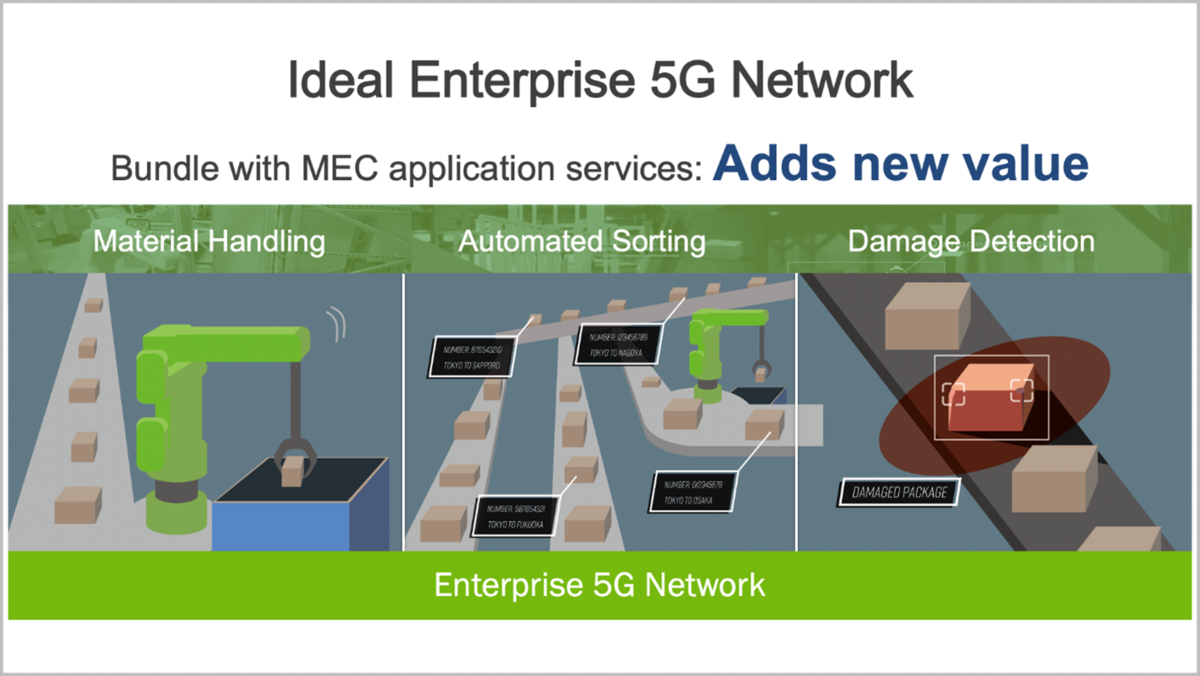 “In the future, we also want to provide this same environment to enterprises,” says Horiba. “Most corporations don’t have the collective skills to do this themselves. We are already working with radio-access vendors like Mavenir who have experience in providing their services commercially. So as early as two or three years from now, we expect to begin commercially offering our AI-on-5G technology to customers.”

Implementing AI applications on 5G promise to innovate the way we work, rest and play. For example, in the near future, we can expect to experience VR and AR content everywhere we go, safe self-driving cars will finally become a reality, and telemedicine will be pervasive. Market researcher IHS Markit estimates that by 2034 5G applications and services will produce sales of over $13 trillion. That’s why today, SoftBank is positioning itself to be at the forefront of these changes.