The Fukuoka SoftBank HAWKS professional baseball team and SoftBank Corp. (TOKYO: 9434) are collaborating to bring Fukuoka PayPay Dome—home stadium of the HAWKS—to the metaverse so fans can enjoy sports and entertainment in entirely new ways.

On May 27, 2022, both companies opened “Virtual PayPay Dome,” a virtual reality (VR) version of the stadium that reproduces its physical counterpart. For the three days of May 27 to 29, they also offered augmented reality (AR) experiences for visitors to the actual PayPay Dome. These two new services are part of SoftBank’s 5G LAB sports and entertainment content lineup.

Virtual stadium spectators get a view by home plate

What lies in store for SoftBank HAWKS baseball fans visiting the virtual version of PayPay Dome?

Using their smartphones, they’ll be able to create avatars so they can walk freely around the Virtual PayPay Dome and chat with other spectators. Also, for the first time in Japan’s sports industry, according to SoftBank research, spectators will be able to get close to home plate to view pitches from a batter’s angle or catcher’s view in quasi-real time. Why quasi-real time? The technology analyzes and processes pitcher throw data on a server, and then transmits ball trajectory data to the virtual space; hence pitches can be seen with a very slight time lag. As part of the digital VIP experience, visitors will even be able to visit the locker rooms of players. SoftBank and the SoftBank HAWKS are collaborating to add more attractions and fully reproduce HAWKS’ games in the virtual space.

In addition, there are plans to offer virtual versions of concerts and other events that take place at PayPay Dome in the future. 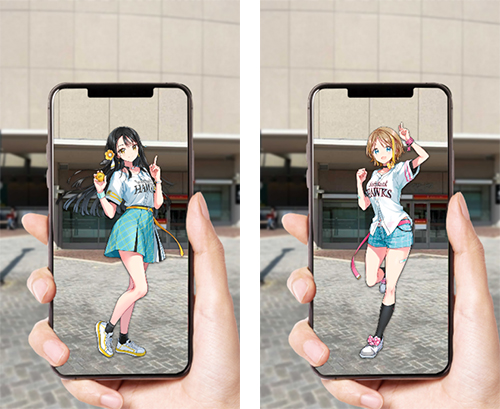 From May 27 to 29, visitors to the real world PayPay Dome were able to increase their enjoyment thanks to a technology called VPS, short for Visual Positioning Service/System, which enabled new Augmented Reality (AR) experiences.

For instance, around the PayPay Dome entrance gates, fans were able to see the moves of SoftBank HAWKS’ official virtual YouTuber mascots, or VTubers, in AR on their smartphones. The VTubers responded to the reactions of fans in the stadium to provide an interactive experience.

Furthermore, physical PayPay Dome visitors participating in the “Practice Viewing Course” were able to view player statistics when they pointed their smartphones to the practice area. In the future, SoftBank and the SoftBank HAWKS will work to enhance and offer new virtual experiences, such as linking PayPay Dome with surrounding stores using AR.