SoftBank Corp. (“SoftBank”) today announced it will carry out a field test for LTE-Broadcast, a real-time video streaming service done via LTE networks. Visual data from the Fukuoka SoftBank HAWKS versus ORIX BUFFALOES series of baseball games from September 17 to 19 will be transmitted by LTE-Broadcast. By analyzing visual quality, traffic, service satisfaction and other aspects, SoftBank will verify LTE-Broadcast's technical reliability and confirm its service viability with a view to introducing new services.

With the continued development and popularity of social media and video services, network data traffic continues to increase as users access higher volumes of content. In this network environment, if a large number of viewers watch video streaming via a unicast system, their viewing experience may suffer from delays and slow video data downloads. Since a multicast system is possible with LTE-Broadcast, traffic can be decreased and network bandwidth requirements can be reduced. Accordingly, LTE-Broadcast is not as prone to network congestion at locations where large crowds gather for sporting and music events, even when there is high volume viewing of on-demand content.

During the field test, SoftBank plans to deliver video from various angles by using multiple cameras. In addition to testing technical reliability, SoftBank will analyze customer satisfaction by letting YAHUOKU! DOME visitors take part in the immersive viewing experience from the palms of their hands. The test will also allow SoftBank to consider new ways of delivering sports content.

For the three day period from September 17 to 19, 2016, SoftBank will carry out a field test for LTE-Broadcast during the Fukuoka SoftBank HAWKS versus ORIX BUFFALOES series of baseball games to be held at the YAHUOKU! DOME (2-2-2 Jigyohama, Chuo Ward, Fukuoka City). In addition to the cameras stationed in the YAHUOKU! DOME for TV broadcast purposes, 5 field test purpose cameras will be added to capture footage from multiple angles. These visuals will be delivered from one test purpose LTE base station via LTE-Broadcast to certain areas of the stands beside the three bases. Test smartphones with dedicated pre-installed apps will be loaned to 300 public participants (100 each day), and they will be able to view the visuals while watching the game in areas that can receive LTE-Broadcast. After the games, SoftBank will collect questionnaire data on the app usage feel, visual content delays and quality levels, and other information. Furthermore, based on data from the test smartphones, SoftBank will verify LTE-Broadcast's technical reliability and confirm its service viability.

Roles of SoftBank and collaborators in the field test 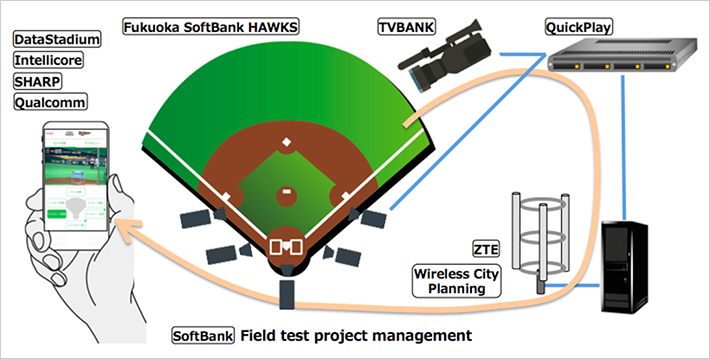