Skill Matrix of Board Directors and
Audit & Supervisory Board Members

External Board Directors and
External Audit & Supervisory Board Members

With regard to election and dismissal of Board Directors including the CEO, the Company fully respects the proposals deliberated in advance by the Nominating Committee, makes resolutions at the Board of Directors meetings, and consult the resolutions at the General Meeting of Shareholders. Board Director candidates are selected based on their qualities and abilities to contribute to the enhancement of corporate value and their deep knowledge in their respective fields of expertise. In addition, consideration is taken into account regarding the balance of skills and other factors of the Board of Directors as a whole.
Candidates to succeed the CEO are appointed as directors and executive officers, whereby future successors are developed and their suitability are overseen.
For CEO succession, after discussing the qualifications and abilities required of the next CEO, such as the ability to form a vision and knowledge of technology and finance, the nominating committee defines candidate requirements based on the strategy and selects several internal candidates. While allowing candidates to gain specific experience through actual company management and business operations, the nominating committee regularly monitors and, if necessary, reviews the requirements, processes and candidates, also taking into consideration internal 360-degree evaluations and various internal and external communications. Through this protocol, it is ensured that the most appropriate successor can be nominated for the business environment at that time.

The remuneration of directors shall be intended as incentive for achieving sustainable growth as well as enhancement of corporate value over the medium to long term, along with the creation of constant earnings growth, stable cash flows and sound relationship with stakeholders, while ensuring to restrain excessive risk-taking but to enhance motivation of directors to contribute to improving corporate performance not only over the short term, but also medium to long term.

Total remuneration and other compensation paid to respective directors (FY2021)*1 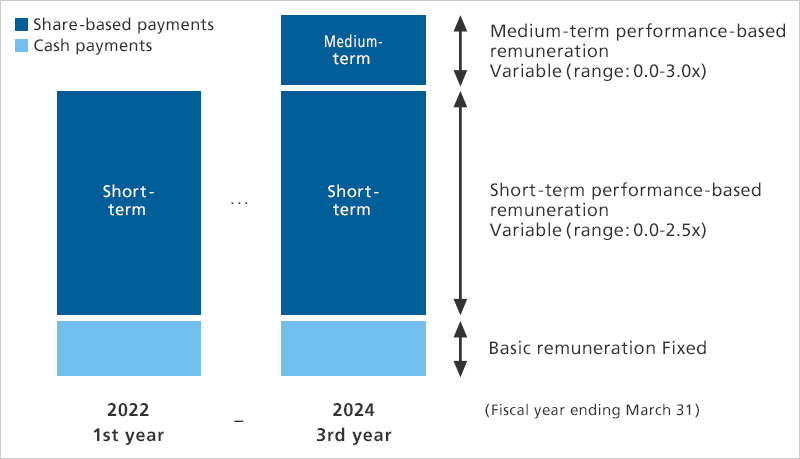